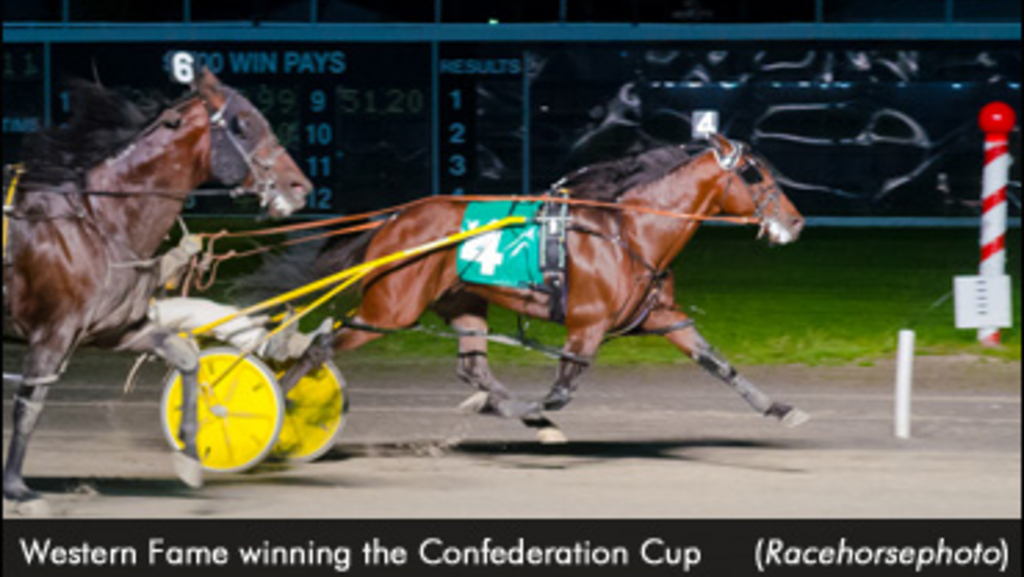 Western Fame was victorious in the 39th edition of the $176,000 Confederation Cup on Sunday night (May 21) at Flamboro Downs.

Driven by Trevor Henry, Western Fame retook the lead during the opening quarter and fought off all challengers to win Flamboro Downs' signature race in 1:51.4 over a 'good' track for trainer Jimmy Takter and owner/breeder Brittany Farms.

"This is where I started, really," said Arthur, Ont. reinsman Henry after the victory. "I came here when I was a kid and it's great to win this race."

Western Fame fired off the gate from post four and gave way to the oncoming seven-hole assignee Mr Wiggle Pants (Doug McNair) before looping right back around during a :26.2 first quarter.

As he led the way towards the half in :55.2, Roll Away Joe (Alfie Carroll) moved underway from third, leading the outer flow composed of Check Six (Louis-Philippe Roy), longshot Stonebridge Beach (Stephane Pouliot) and early trailer Sintra (Jody Jamieson), who was the favoured elimination winner despite his outside post eight draw.

However, Western Fame turned back his first-over foe while Check Six went wide to confront the leader past three-quarters in 1:23.4 and they duelled the rest of the way. Check Six nearly collared Western Fame, but the pacesetter was resurgent in the stretch to defeat that rival by half a length, with Sintra (Jody Jamieson) rallying for third.

"I thought he had a real good shot," said Henry of Western Fame's chances after winning his elimination last weekend. "He drew the four-hole with a couple good ones outside of me. I figured if I could make the front, he’d be good.

"I didn’t really have much of a choice [to release Roll Away Joe] and we got a bit of a breather in the second quarter.

"My horse was great going in the last turn and he kind of caught a pylon, looked at it and he just stopped. And then with Roy coming at him, he just took off again. I've never seen a horse go from so slow to so fast in an instant."

Given the rainy conditions, Henry compared the winning effort by the four-year-old son of Western Ideal-Shyaway to a 1:49 mile on a hot night.

The victory was Western Fame's ninth from 32 career starts and boosted his earnings to $573,174. 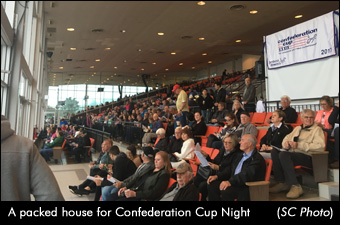 The 2017 Ontario Sires Stakes season kicked off during the Confederation Cup undercard with three-year-old trotting colts and geldings starring in three Gold divisions worth approximately $65,000 each.

Rosberg established a commanding lead after the leaving Manssive (Jody Jamieson) broke stride to his outside in the first turn. The Manofmanymissions-Locksweeper colt was left all alone on the lead, widening to as much as 16 lengths ahead of his rivals through panels of :29, :57.4 and 1:27.3 before even-money favourite Tycoon Seelster (Paul MacDonell) closed the gap to one length by the wire. Resita (Randy Waples) completed the top three finish order.

Defending Johnston Cup-winning trainer Mark Steacy was victorious in his first start of the 2017 OSS season as Dream Massive ($6.20) and driver James MacDonald closed inside of race leader Scene A Magician to score in a lifetime-best 1:58.1.

Scene A Magician (Jack Moiseyev) drove on from the outside post seven to take the lead, clearing Dream Massive at the quarter in :29.1. As he led the way to the half in :59.1, 2-1 favourite Many A Man (Randy Waples) launched an attack from third in front of the grandstand and he applied pressure to Scene A Magician, poking a head in front down the backstretch. Scene A Magician fought back on the way to three-quarters in 1:28.2 before Mister Muscle (Bob McClure) fanned three-wide off cover. Scene A Magician held command down the stretch until Dream Massive shot through along the pylons to prevail by half a length, with Mister Muscle closing for third.

The Muscle Mass-Stroke Me Strokeme colt, who has earned both of his career wins in Gold events, is owned by Michael Soehnlen of Dalton, Ohio.

On First ($24.30) scored his first ever win in the final Gold division of the evening, leading wire-to-wire in 1:58.1 for the Confederation Cup-winning driver Trevor Henry and his wife Shannon.

Leaving from post five, On First out-sprinted outsider Speedycrest (Jody Jamieson) for the leading role and carved out fractions of :28.2, :59.2 and 1:28.4 while rebuffing the 1-2 favoured first-over challenger, LMC Mass Gem (Louis-Philippe Roy) en route to the one and a quarter length victory. Speedycrest edged out LMC Mass Gem for the runner-up role.

The Holiday Road-Windsun Firstafair gelding, who went unraced at two with Sunday's Gold event being his fifth start, is owned by the Trevor Henry Stables Inc., along with David Darocy of Windsor, Ont., and James Fleming of Bayfield, Ont.

The first Grassroots event of the Ontario Sires Stakes season was also contested on Sunday, with a trio divisions for three-year-old pacing colts and geldings worth over $18,000 each.

The Jack Darling Stable and Jody Jamieson teamed up for a pair of victories with Southwind General ($2.50) taking a new mark of 1:54.3 and Frontier Seelster ($5.50) scoring in 1:54.4. The other division was won by the Colin Johnson-trained Blackjack Seelster ($9) and Louis-Philippe Roy in 1:55.2.

Congrats to Western Fame and

Congrats to Western Fame and his connections for a great win! And for all winners of the night for the OSS races.