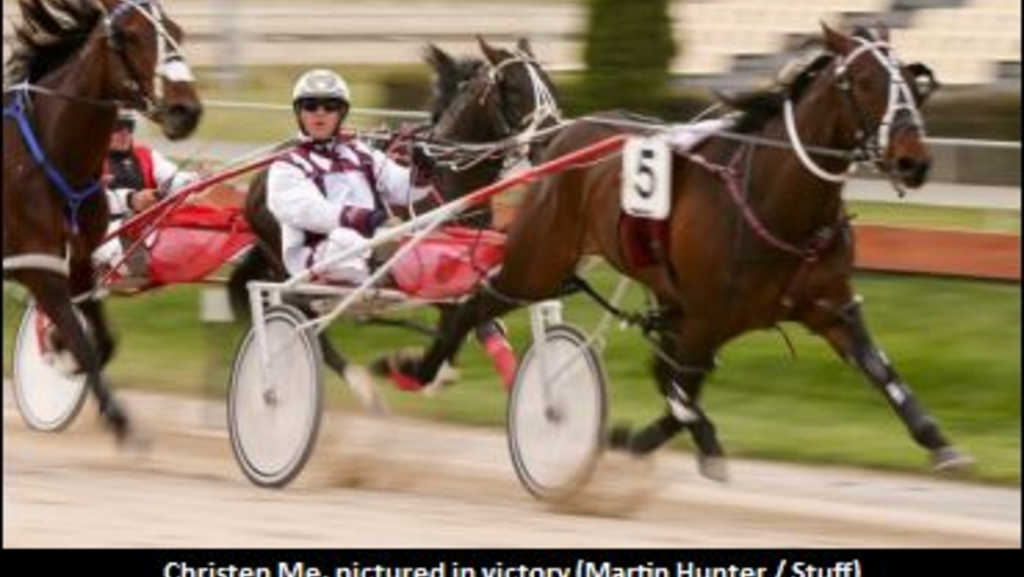 There has been a fair bit of hype surrounding the North American debut of superstar Down Under pacer Christen Me, who recorded his first-ever charted mile on western soil this morning (Tuesday, May 2).

Christen Me, driven by Tim Tetrick, was the centre of attention during Harrah’s Philadelphia’s qualifying session. The nine-year-old son of Christian Cullen took to the track for the first dash of the morning.

The field for the five-horse field faced the gate with Tetrick and the 11-time Group 1 winner aligned in Post 4. The duo opted for the cautious approach off the wings. They settled into third as Onhishonor Hanover (driven by Andrew McCarthy) led his foes to the :27.3 quarter pole.

Christen Me started to make his move to the front in the vicinity of the half-mile pole. The winner of more than $2.4 million in Down Under purses was still in third, but overland, as Onhishonor Hanover clicked off the half-mile pole in a rated :57.1.

It was in the third quarter where Christen Me grabbed the lead and whizzed by the third station in 1:25.

Christen Me maintained his lead through the final quarter of the tilt, as he kept his foes at bay and utilized a :28.4 final quarter to get the job done in 1:53.4. The margin of victory was one length over Good Living (Corey Callahan), who had raced second in the mile. Onhishonor Hanover hung on for third, but finished more than six lengths back of Christen Me.

Jo Ann Looney-King was the trainer of record for the morning mile. Christen Me’s new owner, Richard Poillucci, told Harness Racing Communications in late March that he is “not going to go overboard with him this year. We’ll race him in some major races and see how he fares.”

A few weeks later, Jim King Jr., who also trains Christen Me, said that the gelding would probably be dropped in the box a few weeks after qualifying and that he would be pointed at the Roll With Joe Stakes at Tioga. “He’s got to qualify here in the United States,” King said. “We’re probably about three weeks from that, and then we’ll try to get him started someplace – wherever’s available – that we feel is the best for him.”

King commented after the Tuesday qualifier, stating, “‘Chris’ is staked heavily, but we need to get his lines and get him in an overnight for starters.”

King went on to say that Christen Me is “not only fast, but he’s highly intelligent. Glad to have this qualifying monkey off our backs and of course he qualified with lasix.”

King ended off by saying that he is “thrilled” with the star pacer.

(With quotes from Harrah’s Philadelphia)