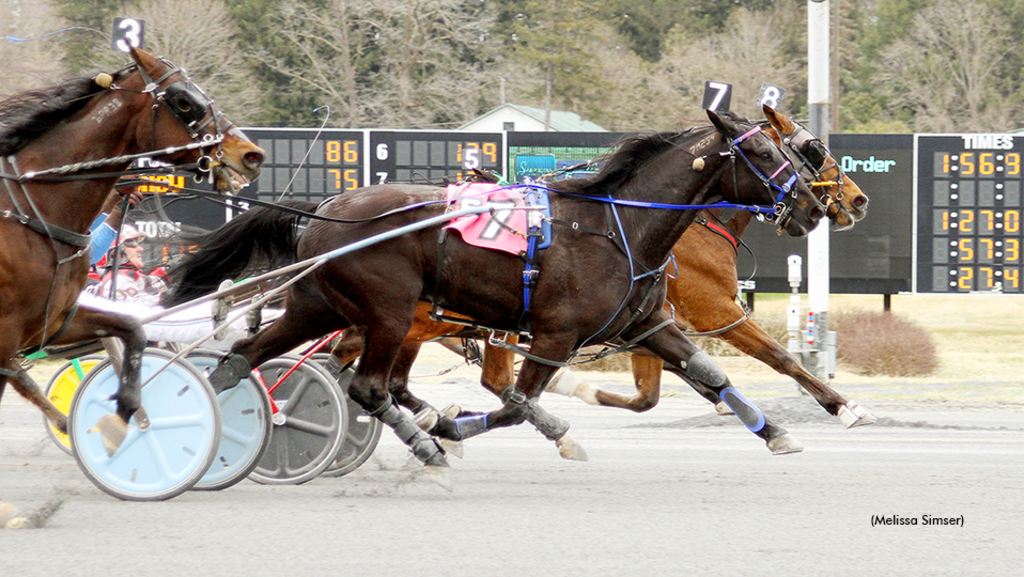 Dewey Arnold rattled off back-to-back victories in the Open Trot in early March at Saratoga Casino Hotel before taking a couple of weeks off and making his return on Sunday afternoon (April 3).

Assigned post eight in his attempt to three-peat, Dewey Arnold was one of three 2-1 co-favourites in the $15,000 feature for high-steppers. Driver Jimmy Devaux took the Dave Dewhurst trainee back at the start coming away seventh only due to an early breaker in the race. Dewey Arnold moved to the outside approaching the half but couldn’t flush any cover before coming after the race’s leader Madhatter Bluechip (Brett Beckwith), another of the race’s co-favourites. 'Dewey' kept plugging away and though it appeared the task would be too difficult, the four-year-old star proved otherwise surging in the stretch before stopping the timer in 1:56.4 to complete his hat trick. Gigfy (Alek Chartrand) continued his strong season by closing to be second while Madhatter Bluechip had to settle for the show spot.

Dewey Arnold, a son of Deweycheatumnhowe owned in tandem by Dewhurst and Philip Hale, now has 17 wins in his 35 career starts and is just shy of the $300,000 in lifetime earnings.

The victory in the Open was one of five on the day for Devaux, who currently sits second in the driver standings in the early stages of the ‘22 campaign at the Spa.

(With files from Saratoga)