On what was a big night for driver Frank Coppola Jr. and trainer Jackie Greene, Artful Way scored in the $12,000 Open Pace in 1:51.

Coming from off the pace in a mile that saw first half fractions of :26.2 and :54.3, the five-year-old Artful Way powered up in the backstretch before cruising past his rivals to secure the open-length victory. 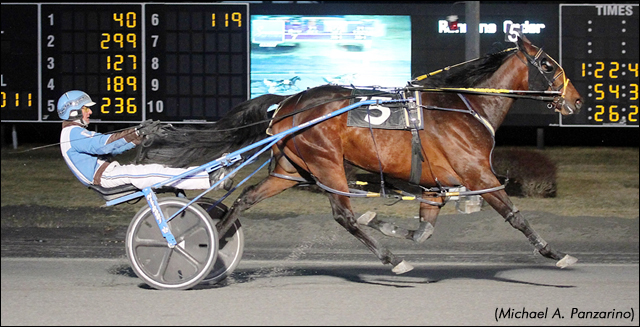 The track’s defending Pacer of the Year, Artful Way is now a two-time winner in the Open Pace in 2017 as he matched his lifetime mark of 1:51 set in his award-winning ’16 campaign.

Betterlatethnnever (Stephane Bouchard) came from last to finish second in the feature while Dontcallmefrancis earned the show spot. Artful Way returned $6.50 to win and led an exacta and triple that paid $33 and $141.50, respectively.

Coppola piloted four winners on the Saturday card, three of which came for conditioner Jackie Greene.

Live racing continues on Sunday afternoon with a matinee set to kick off at 12:15 p.m.