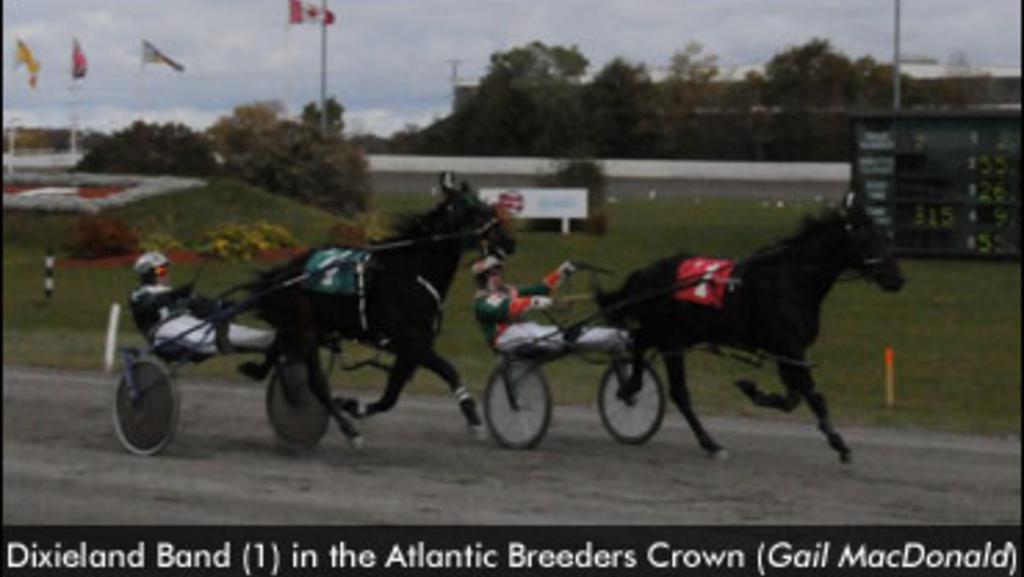 Bagnall was recognized for his contribution to P.E.I. racing as a breeder, owner, trainer, driver, and industry official.

Dixieland Band edged out Paymenowpaymelater for Horse of the Year honours in one of the closest results in recent event history. Dixieland Band was bred by Bill Andrew of Meridian Farms and earned almost $51,000 in his two-year-old campaign.

Guest speaker Dr. Ian Moore updated the crowd on his stable star State Treasurer and the large roster of young horses he is prepping for the Grand Circuit competitions.

Other award winners were:

Two-Year-Old Colt Trot
Windemere Ty had earnings of over $21,000 and top three finishes in 10 of his 14 starts. Bred by Windemere Farms and Margaret Watts, owned and trained by Ralph Annear, co-owned and driven by Jack Panting.

Two-Year-Old Filly Trot
Paymenowpaymelater was a nine-time winner, with earnings of $30,862. Bred by Eldred Nicholson and Peter Buchanan, owned by Wade Peconi, trained by Earl Watts, and driven by Kenny Arsenault.

Three-Year-Old Colt Trot
Dusty Lane Galaxy earned over $24,000 in 2014 and took a record of 2:01. Bred by Michelle Bohrer and John Langdon, co-owned by Peter Buchanan and the estate of George Boswell, trained and driven by Gary Chappell.

Three-Year-Old Pacing Filly
A winner of over $56,000, Lovineveryminute was owned by Kent Duggan, Lana Murphy and Windemere Farms, and trained by Earl Watts.

Claiming Horse of the Year
Forever Paradise was a seven-time winner in the Maritime claiming ranks in 2014, bred by Art and Colin Millar, owned by Reg MacPherson, trained by Kevin MacLean, and driven by Marc Campbell.

Aged Trotting Horse
A 13-time winner in 2014, Zip The Lip had an incredible 23 for 26 in the top three. Owned by Orville Willis and trainer Don Sweet, and driven by Brian MacPhee.

Aged Trotting Mare
Pleasure Girls was a 2:00.3 winner at the CDP and is owned by Shelley Gass, trained by father Ronnie, and driven by Corey MacPherson.

Aged Pacing Horse
Astor was a 1.55.4 winner at the CDP with earnings of over $24,000. Owned by Foxyhall Racing Stable, trained and driven by Jason Hughes.

Aged Pacing Mare
Stayoutofmyaffair was a nine-time winner, including a 1:55.1 clocking at the CDP. Owned by Robbie Hughes, trained and driven by Jason Hughes.

Fan Favourite Award
One of the toughest campaigners in Prince Edward Island racing, a 53-time winner, and a horse that is getting better with age. Blu Meadow Willie was bred by Ralph Frizzell, co-owned by Brenda MacInnis, and co-owned, trained, and driven by Bob McInnis.

Trotter of the Year
Paymenowpaymelater

Horse of the Year
Dixieland Band

Grooms of the Year
Melissa MacRae and Shane Baglole

Leading Percentage Driver
Gilles Barrieau (with a UDRS of .419)