Sally Fletcher A, by American Ideal, was back competing against Open company on Thursday afternoon (April 11) at the Saratoga Casino Hotel and was looking to take another trip to the winner’s circle.

The Jose Godinez trainee, who was a three-time winner of the local Open in 2018, prevailed in last week’s $12,500 Winners Over for fillies and mares and graduated into the feature for distaffers on Thursday’s matinee card.

Powering out to the early lead, Sally Fletcher A gave way to rival Jewels Forreal (who was driven by Frank Coppola Jr.) approaching the opening quarter. Jewels Forreal paced the first half in :56.4 and checked in at the three quarters in 1:25.2 while still appearing to have plenty left in the tank.

Driver Bruce Aldrich Jr. pocket-pulled around the final turn and Sally Fletcher A got by in the final strides to score in 1:54.2 for her third consecutive victory and fourth of the year. 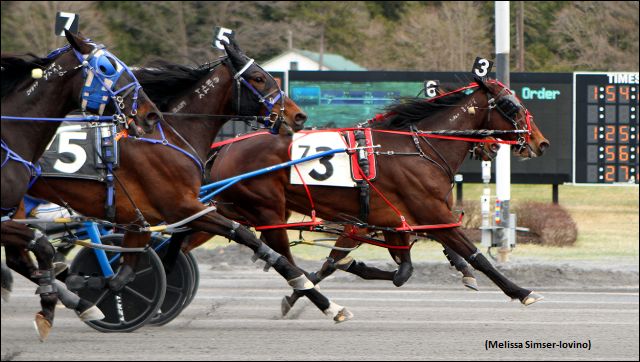 Sally Fletcher A was the public’s lukewarm favourite, but still paid a solid $7.90 to win. She also led an exacta and triple that came back at $50.00 and $304.00, respectively. Sally Fletcher A is owned by the Blindswitch Racing Stable of Cortlandt Manor, NY.

Live racing will resumes at Saratoga on Saturday evening with first post time set for 6:45 p.m.