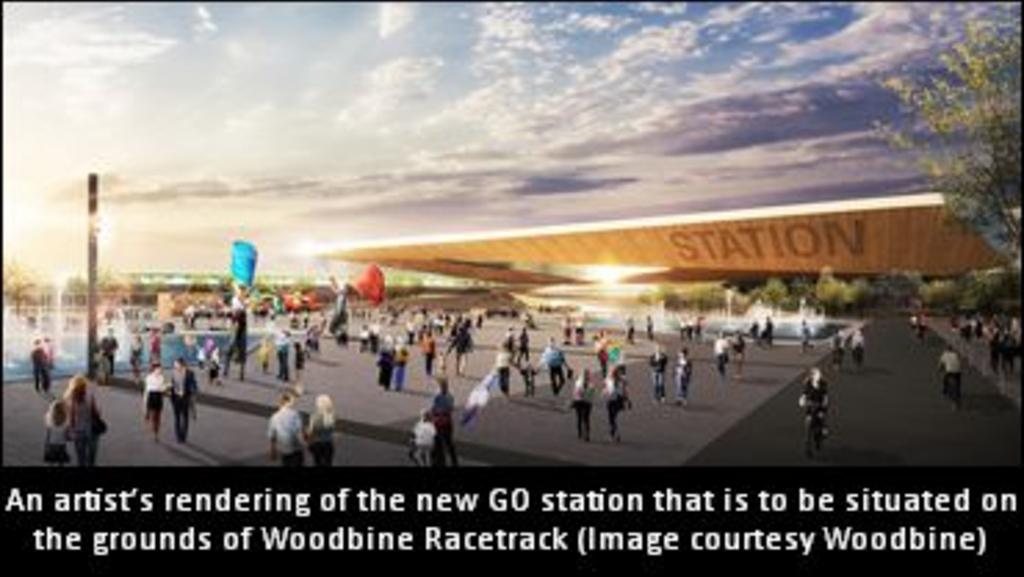 On Wednesday morning (March 6) at Woodbine Racetrack, the Ontario Government announced its plan to build a new GO station at the suburban Toronto raceway which will come with no cost to taxpayers.

The Ontario Government and Metrolinx are partnering with Woodbine Entertainment to build the station along Highway 27, on the Kitchener GO rail line.

"Our government is putting Ontario's transit users and taxpayers first by delivering a modern GO station at Woodbine," said Minister Yurek. "We are moving quickly to address transit needs and get relief to people who rely on the GO network."

As part of Ontario's broader strategy to deliver more transit solutions in the GTHA, the province is pursuing a transit-oriented development approach to the delivery of transit infrastructure to reduce the cost to taxpayers.

An artist’s rendering of the new GO station

Woodbine Entertainment has development plans that will bring new jobs, housing and entertainment opportunities to the area around the station.

"The new station is terrific news for everyone in Etobicoke and the surrounding area," said Surma. "Our government came into office with a clear mandate to help people and this will better connect Etobicoke residents to the GO line."

"A new GO station at Woodbine will offer opportunities to live and work near a major employer and entertainment destination, as well as better access to the local community and jobs in this employment mega zone," said Phil Verster, President and CEO of Metrolinx. "This is a wonderful announcement for our customers. We look forward to working with Woodbine Entertainment on this exciting venture."

"This is an exciting day for Woodbine Entertainment and the entire community," said Jim Lawson, CEO of Woodbine Entertainment. "Bringing mass transit to the Woodbine property is a big part of a larger vision to develop and unlock the value of our land to create new revenue streams that will help grow and sustain the horse racing industry for decades, attract millions of visitors to our site annually, and serve the surrounding community. It will be a major commercial and employment hub that will include mixed-use residential, commercial space, sports and recreations facilities, parks and public space." 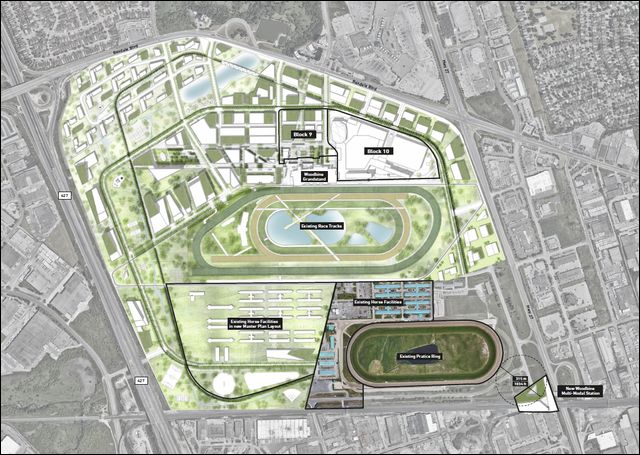 Where the GO station is going to be situated (bottom right-hand corner of image -- for a larger image, click here)

Trot Insider first unveiled news of the proposal this past December. To read that article, click here.

To read the Province of Ontario’s backgrounder on the new GO station at Woodbine, click here.

(With files from the Province of Ontario)

Looks like a fabulous development that you could see coming. E. P Taylor was a true visionary when he accumulated this land in the 1950 's. It should make Woodbine Entertainment very strong financially. Hopefully the standardbred side gets a piece of the action now that they no longer race at Woodbine!

Very good IDEA, maybe I will

Very good IDEA, maybe I will move back to Ontario and look for an asst trainer or maybe a trainers occupation.With GO you can live anywhere and be at the track much faster then driving.