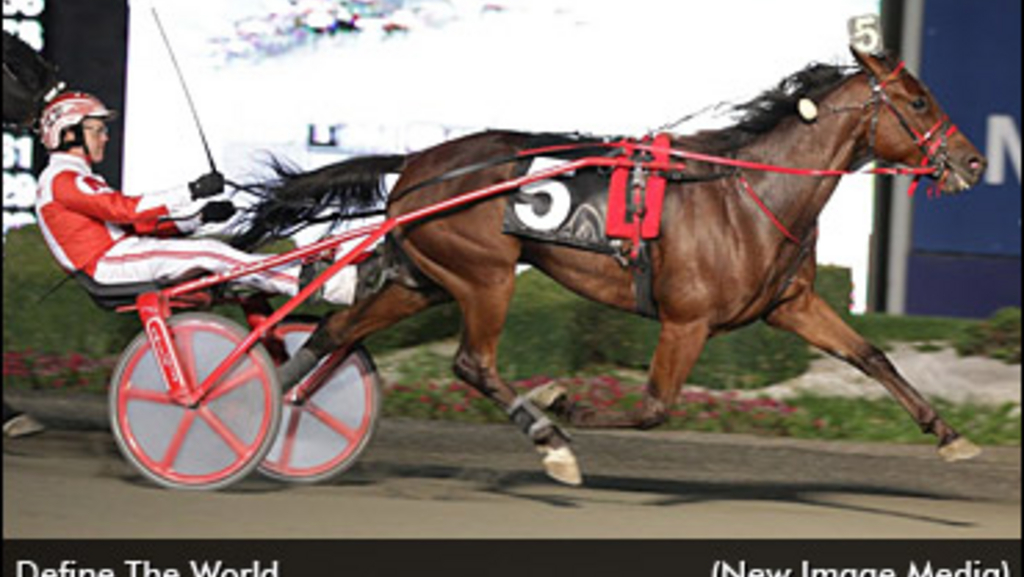 After seven years on the track, 119 starts and 39 wins, multiple trips overseas, an O'Brien Award and a return from injury to compete and win Open class events at the age of eight, millionaire Define The World has been officially retired.

One of the province's more popular trotters, Define The World was a homebred of Toronto's Al Libfeld. The son of Duke Of York - Venice Holiday showed some potential at age two with a 1:59.3 qualifying win at Mohawk Racetrack. Libfeld noted that the decision was made in concert with trainer John Bax to geld the horse after his two-year-old season.

As a three-year-old trotting gelding Define The World put all that potential together and won numerous stakes events, including the Canadian Breeders Championship, Simcoe and multiple Ontario Sires Stakes Gold finals. With his 1:54.2 win on Confederation Cup day at Flamboro Downs, Define The World became harness racing's fastest three-year-old trotting gelding on a half-mile track.

"I think when he set the world record at Flamboro, that was kind of his coming out party," said Bax from his winter base in Florida.

It was one of two world records on the day for driver Paul MacDonell, who also guided Somebeachsomewhere to a 1:49.2 world record later than day.

"In his three-year-old year after that world record at Flamboro, he marched through the rest of the season - he was the best colt that year," said MacDonell. "He just kind of took over after that."

Define The World finished his sophomore campaign with 14 wins and five second-place finishes from 24 starts and more than $750,000 in purses. That seasonal tally was enough to propel voters into selecting Define The World as the O'Brien Award winner for three-year-old trotting colts and geldings.

Bax recalls a race that Define The World didn't win as one of his standout moments.

"In the Kentucky Futurity he raced on the front and got roughed up pretty good, finished back. And then in the second division he ended up finishing fourth, racing off the back end and I thought, 'you know what, that's pretty courageous for him to come back a second heat and be able to put aside getting beat up and then finishing fourth.’ I was pretty proud of him that day."

As an aged horse, Define The World consistently competed against the top level of trotters at ages four, five and six. Each year he started at least 24 times and banked no less than $265,000. In 2010 at age five, Bax and MacDonell made the trip to Europe with Define The World to compete in the Oslo Grand Prix. MacDonell guided the trotter to a third-place finish behind top European trotters Lisa America and Maharajah. Two weeks later, Define The World finished fifth in his heat of the prestigious Elitlopp, just missing out on advancing to the final.

With just a brief break after returning from Europe, Define The World continued to consistently compete against the top trotters here before another trip to Norway and Sweden in 2011. He then closed out his six-year-old campaign, but when Europe came calling for a trotter in 2012 Define The World was nowhere to be found.

"He had a knee chip in his left front leg and it needed surgery," said Libfeld. "He spent nine months in Kentucky recovering."

Bax noted that Libfeld always did the right thing for the horse, giving him more than the recommended time to recover.

"Al is always looking after the horse. He sent him down to Kentucky, did the operation and gave the horse a year, which most times you don't have to give a year for an operation, but he gave the horse the extra time and he did come back to the level he had been at."

Define The World returned to the track in late September 2012 with a winning performance at Kawartha Downs and quickly climbed his way back up the class ladder. By early 2013, the eight-year-old was racing – and winning – in the Preferreds at Woodbine Racetrack.

"To come back at that level is the most amazing thing to me," said MacDonell. "They get to a certain age and it's always harder for them to come back. Those kinds of horses impress me more than anything."

Bax also gives credit for the tough trotter’s return to his son and assistant trainer Matt.

"I have to give him credit, Matt worked hard on the knee and tried to do as much for it as you can.”

Define The World collected three Preferred victories in his last five career starts and added $61,500 to his $1,740,839 bankroll. He was a winner in his last two races, including a 1:54.3 triumph on February 25.

Entered for the Preferred on March 4, Define The World was scratched. Torn ligaments were found in his right knee. The horse was most likely shifting weight off his left knee that had surgery, weakening the right side in the process.

"It's a testament to how tough he is that he went out and won that last race," said Matt Bax.

Define The World will now spend his retirement at Bax's farm outside Peterborough, Ont. with Hall of Fame trotter Goodtimes.

However, the veteran horseman notes that one of Define The World’s greatest qualities is something you just can’t teach.

"That fire has to burn in them, that's what makes a good horse better than good,” he said. “The difference between a good one and a great one is just that desire, that will to win. You can't train that.

"He always did us proud and I can't say enough...Paul always did a great job of looking after him and driving him, and I couldn't do it without an owner like Al, who always allowed me to do what was best for the horse. And that's a real tough lesson for owners: if you do what's best for the horse, the horse will do good for you."

Define The World definatly showed his class in his last 2 wins. Digging in and fighting off horses right to the bitter end. Horses like that don't come around every day. Enjoy your retirement old boy! You earned it!!!

It's always a wonderful

It's always a wonderful feeling to see GREAT ones retire to a good home knowing that a job was well done.

Libfeld,Bax,and MacDonell, three class acts in harness racing! Add Define The World to the mix and you've got a racing fan's dream.

The three humans just mentioned know how to treat the equines with caring and dignity.A proper retirement is fitting for DTW.

Enjoy your retirement Define The World and special thanks to all his connections for doing such a wonderful job with him!