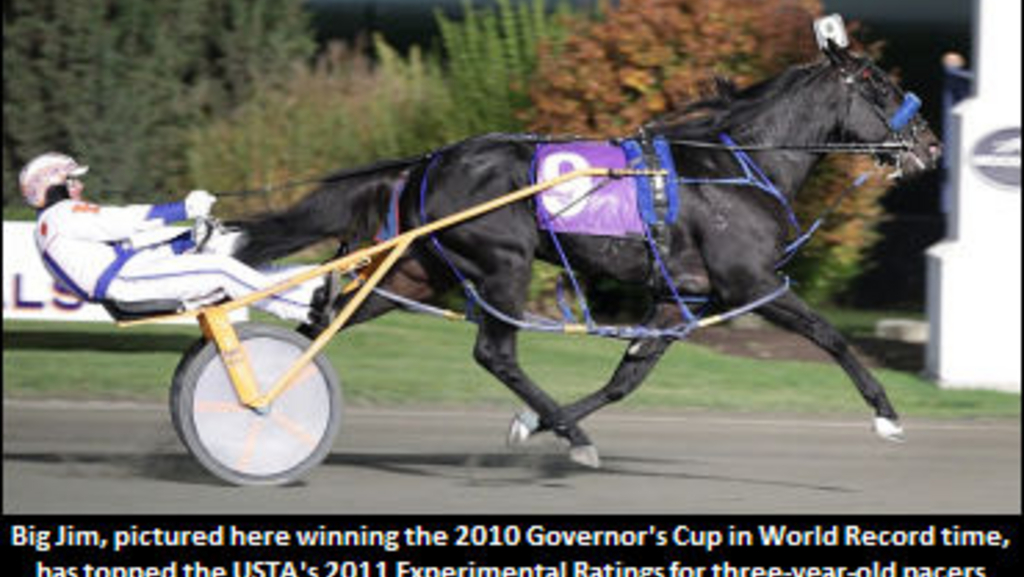 Bergstein has projected that the Western Ideal colt, who is owned by James 'Big Jim' Carr of Hamilton, Ont., will pace in 1:47.1 at some point this season.

The speed projection is equal to what Bergstein expected from the 2010 Pepsi North America Cup winner, Sportswriter, last year.

Big Jim won compiled a record of six wins, one second-place finish and two third-place efforts from his 10 juvenile starts. He won the Dream Maker Pacing Series before capturing a division of the Nassagaweya Stakes and an elimination of the Metro Pace. After an uncharacteristic break of stride in the $1 final of the Metro Pace, the colt rebounded by sweeping his $600,000 division of the Breeders Crown and setting a World Record (1:49.1) in the $709,000 season-ending Governor's Cup.

Trot Radio's Norm Borg recently spoke with Carr in regard to his budding superstar. To listen to the interview, click here.

Other three-year-olds with Canadian connections which Bergstein has placed in his list include Cams Card Shark colt Shadyshark Hanover , who in 2010 won a division of the Nassagaweya Stakes. The colt is co-owned by John Fielding of Toronto, Ont. and Richard Strachan of Ajax, Ont. along with American interests.

Camluck colt Mystician has also made Bergstein's List. Jody Jamieson drives the colt for trainer Jeff Gillis. Along with American interests, Gillis owns the colt along with Ken Henwood of Mississauga, Ont. and Mac Nichol of Burlington, Ont.

The Dave Menary-trained Camluck colt Prodigal Seelster has also made the list. The Battle of Waterloo and Ontario Sires Stakes Super Final winner is owned by Larry Menary of Cheltenham, Ont., Denis Breton of Welland, Ont., Kenneth Ewen of Georgetown, Ont. and Double Or Nothing Stables of Hamilton, Ont.

American Ideal colt Great Vintage, who has mainly American connections, has also made the list. He is owned in part by John Fielding of Toronto, Ont.

The USTA's 2011 Experimental Ratings for three-year-old pacers, compiled by Stan Bergstein, appears below.

Big Jim is an easy horse to

Big Jim is an easy horse to cheer for, it is nice to see a driver like Phil Hudon get a real shot to win some of the big races. With this type of horse so often the connections end up going to a big name driver from the big m and it is refreshing to see connections that stay loyal to a little guy like Phil who is more then capable of winning a race if he has the horse power. Lets hope he lives up to his experimental ratings and wins some of the big races as a 3yr old.