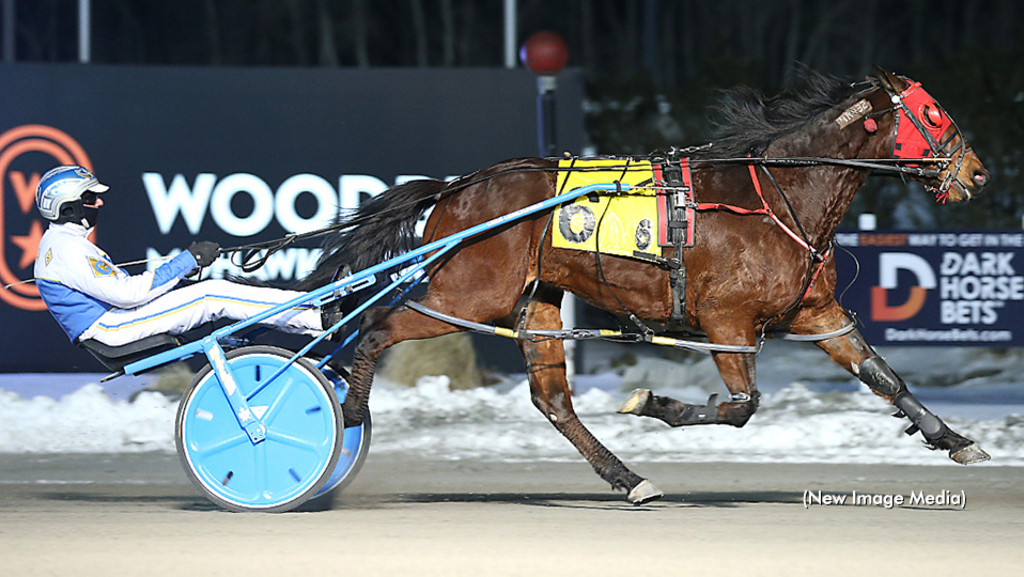 Leaving from post six, the five-year-old American Ideal gelding grabbed command to a :29 first quarter and soon yielded the lead to Day Delight before circling again for the front to the half in :58.4. Day Delight pulled pocket around the final turn to challenge for the lead again nearing three-quarters in 1:26 but his challenge promptly fell flat in the lane as Reagan Blue Chip strolled home 3-1/2 lengths better in 1:55. Air Strike rallied for third and Drivelikeustoleit took fourth.

Owned by Des Tackoor, Reagan Blue Chip won his sixth race from 27 starts, lifting his earnings to $94,663. Robert Fellows trains the $2.60 winner and Chris Christoforou sat in the sulky.

Driver Doug McNair circled the six-year-old Always A Virgin gelding from the pocket after a :29.1 first quarter to take the lead from Snap Test before a :59.2 half. Quickening the tempo to three-quarters in 1:27.1, Farmers Tan began to tire while Hooter Shooter fired down the outside after the lead late. However the favourite had just enough to cross the line a half length in front of Hooter Shooter while Snap Test took third and River Dali finished fourth.

Good And Sweet swept around his competition to win the third Pop-Up Series split in 1:57.4.

Sights On You set a tempo of :27.4, :58.4 and 1:27.3 while enduring first-over pressure from Stolen Art heading to the half. Driver Colin Kelly tracked that first-over move with Good And Sweet and waited until the bottom of the final turn to edge the six-year-old Sweet Lou gelding off a helmet. He promptly shot into action straightening for home and slid by Stolen Art to win by 1-1/4 lengths. Sights On You finished third and Skylar took fourth.

Conditioned by Kyle Bossence for owner Steven Colvin, Good And Sweet won his second race from nine starts this season and his 12th from 60 overall, lifting his earnings to $75,304. Colin Kelly drove the $8.90 winner.

Harry G jetted from off the speed to claim victory in the final Pop-Up Series division, stopping the clock in 1:55.4.

American Sniper led to a :28.4 first quarter as Twin B Laker pressed for and then took over the lead. He swiftly opened three lengths on American Sniper to a :56.4 half and cruised to three-quarters in 1:25 as American Sniper slowly emerged from the pocket with a line of horses in behind. Entering the stretch, Harry G plugged down the center after sitting fourth over and ripped by rivals to score a 2-3/4-length win over American Sniper. Twin B Laker finished third and Atthebeach Hanover finished fourth.

A five-year-old gelding by Rollwithitharry, Harry G won his 17th race from 59 starts, lifting his earnings to $81,460. Mike Saftic trains the $16.40 winner for owner/breeder Christina Gillis and Bob McClure sat in the bike.