Certify Is The Real Deal At ‘The Spa’

Sunday’s feature at Saratoga Casino Hotel was the $15,000 Open Trot and it went the way of an Open ‘first timer.’

Certify, by Credit Winner, was a winning machine in 2019 while he spent much of his year competing in New York Sire Stakes races. Whether it was travelling the fair circuit or racing in Excelsior competition, Certify thrived throughout his three-year-old campaign. Certify, who was a late-season purchase by owners William Hartt and Marc Reynolds, paid immediate dividends for his new connections when he won the $50,000 Excelsior final that was contested at Saratoga this past September.

Following a win last Sunday in what was his seasonal debut, Certify was racing in the Open this week and wound up as the public’s 1-2 betting favourite with Jay Randall in the sulky. 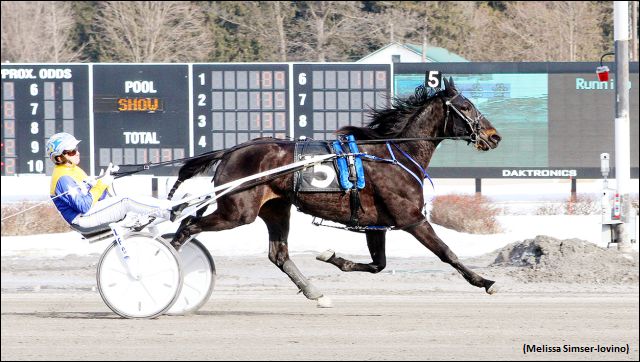 The four-year-old trotter cruised out to the early lead in the six-horse feature and travelled unopposed for the majority of the mile before Randall asked the budding star to crank up the speed around the final turn. Certify’s response was instant and he drew away to be a decisive winner and stopped the timer in 1:55.4. The victory, which was his first career Open Trot victory, extended his local win streak to six.

Volare (who was driven by Billy Dobson) sat the pocket to the winner before finishing as the runner-up. Cash Me Out (Brett Crawford) came on to earn the show spot. The exacta and triple in the feature paid $14.20 and $61, respectively.

Certify is trained by Lance Hudson, who has recorded six wins and a second in his seven starts since acquiring the talented trotter in September of last year.

Live racing at Saratoga will resume on Wednesday afternoon (first post is set for 12 noon).