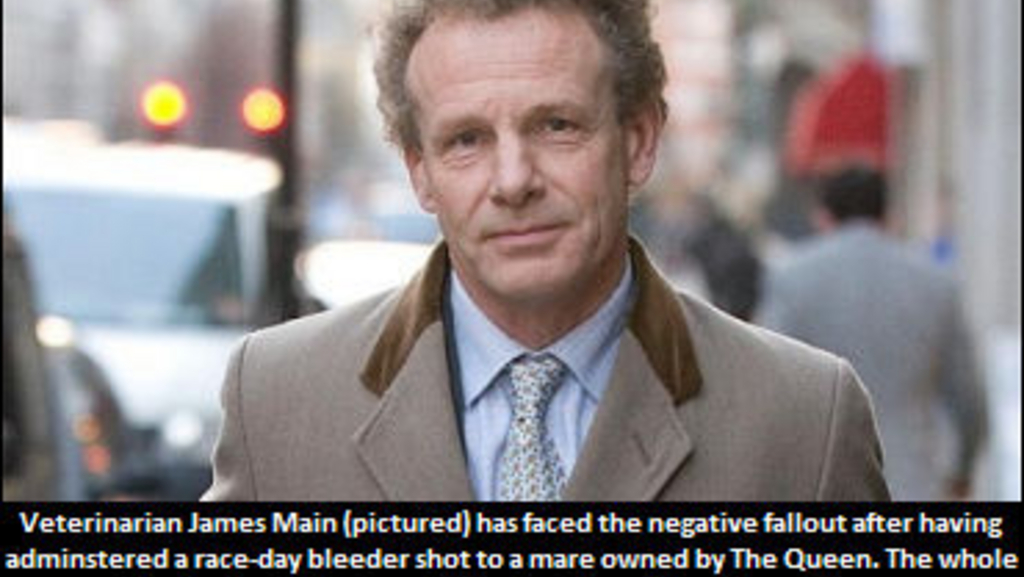 It has been reported that the Royal College of Veterinary Surgeons has ruled that James Main, the veterinarian which administered a race-day injection of tranexamic acid to a mare owned by The Queen, be struck off the

An article on horsetalk.co.nz explains that the college's disciplinary committee came to the ruling after a six-day hearing. The horse in question, six-year-old, Nicky Henderson-trained Moonlit Path, was given a 20 millilitre dose of TA, a blood-clotting agent, the morning of February 19, 2009. Moonlit Path tested positive for the substance after a post-race test.

The report states that Main faced four charges of serious professional misconduct -- three in regard to the breach of British Horseracing Authority rules, and one regarding the dishonest concealment of his actions in his practice clinical records. Main stated that he had administered the TA injection in the best interest of Moonlit Path. Main will now not be able to ply his trade for at least 10 months

"[We] regard it as wholly unacceptable practice that a veterinary surgeon should be party to serious breaches of rules of another regulatory body in the field of animal welfare ... and which go to the very integrity of racing," the article quotes committee chair Sheila Crispin as saying.

"Whilst the findings relate to a single incident, [we] are satisfied that Mr. Main's actions amounted to pre-meditated misconduct ... It is highly relevant that Mr. Main held positions of responsibility within the racing industry where he was required to uphold the rules and standards of the profession."

The article explains that the committee found Main's evidence "evasive, lacking in candour and on some aspects of the case his evidence was untrue." The committee also stated that Main's actions were "wholly unacceptable."

"I am deeply shocked and disappointed. The prospect of not being able to earn a living as a vet is a matter of grave concern," Main was quoted as saying in response to the ruling in an article on dailymail.co.uk.

"I would like to stress that I sought to act only in the interests of Moonlit Path's welfare as I do for all animals in my care."

The entire situation has been watched closely by many in the racing world, and has spurred many to let their feelings on the matter be known. An article on guardian.co.uk quotes trainer Charlie Mann as saying that he believes that the BHA has been "very hard on him (Main)" and that Main has "always had the horse's welfare at heart."

Mann was also quoted as saying, "I gather it's (TA is) something that doesn't stop a horse or help him win a race, it's a welfare thing, if he bleeds during the race. Bleeding is a horrible thing for a horse and, if something like this can help him over that, then of course it should be looked at."

A BHA spokesman has stated that there is no prospect of a change regarding the presence of TA in a horse on race day.

(With files from horsetalk.co.nz, dailymail.co.uk and guardian.co.uk)