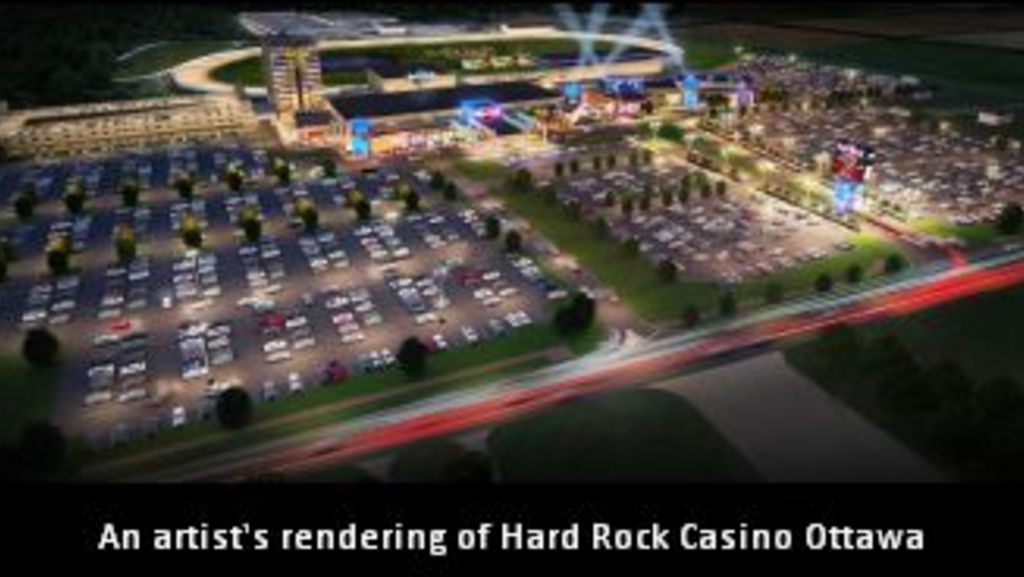 As customers of the Rideau Carleton Raceway Casino continue to enjoy a newly-renovated gaming room featuring popular games such as Blackjack, Baccarat, Pai Gow and Poker, Hard Rock International and the Rideau Carleton Raceway Casino moved forward with plans for phases 2 and 3 of its joint venture, ‘Hard Rock Ottawa’; a unique and dynamic entertainment destination planned for the Nation's Capital.

Pending approval of the Zoning By-law Amendment Application filed with the City of Ottawa, Hard Rock Ottawa plans to invest more than $318 million over the course of six years on a multi-phased project which is expected to create close to 4,000 direct and indirect jobs, as well as provide significant economic development in rural Ottawa and beyond. The project is funded entirely by the private sector and is expected to generate $206 million in tax revenue for the Province of Ontario, the Federal Government and the City of Ottawa, after phase 3 – including over $12.8 million in annual revenue for the City of Ottawa, which will double current revenues, once fully operational. Over the first ten years of operations, the expansion and additional gaming tables are expected to generate $43 million in new revenues for the City of Ottawa.

The Zoning By-law Amendment Application seeks permission from the City of Ottawa for only four items related to the expansion:

The project was awarded to Hard Rock International and Rideau Carleton Raceway Casino by the Government of Ontario, through the Ontario Lottery and Gaming Corporation (OLG) in 2017. The OLG has been working on a modernization plan for the casino operations at the raceway location since 2012, and in 2013, City Council pronounced the Albion Road site as the only acceptable location for an expanded gaming operation in Ottawa. Gaming has taken place at the site since 1962, and slots were installed in 2,000 in order to provide a boost to the harness horse racing industry and the rural economy.

"We are excited to have this opportunity to create a vibrant entertainment destination for not only residents of Ottawa, but for the millions of tourists that visit the Nation's Capital each year," said Jim Allen, chairman of Hard Rock International. "Our commitment is to develop a world-class facility while ensuring the highest standards of customer service and responsible gaming practices."

"Our application for rezoning puts us that much closer to breaking ground on a project that we are confident will re-energize the Ottawa entertainment scene and give our local economy and horse racing industry a significant boost," said Andrew Wright, director of the Rideau Carleton Raceway Casino. "With over 225 venues in 75 countries worldwide, Hard Rock has a proven track record of success; we are thrilled to partner with this exciting organization."

The development of a high-quality gaming and entertainment destination in Ottawa is expected to recapture much of the estimated $60 million that Ottawa-area residents and tourists are spending annually across the river in Quebec on their gaming entertainment.

The modernization at the current site is also an opportunity to create an entertainment-driven destination for the city's changing demographics, with the latest and newest amenities, while at the same time enhancing the horse racing programming and gaming features Ottawa residents have enjoyed for more than 55 years.

At the end of the construction phases, the Hard Rock Ottawa project will see the current Rideau Carleton Raceway Casino facility completely rebranded and redesigned to include: some of the world's greatest music memorabilia; four new restaurants including the Hard Rock Café; The Rock Shop, with collectible fashion and merchandise; and Hard Rock Live performance venue, featuring talents and musicians such as Mary J. Blige, Rod Stewart and Jerry Seinfeld.

As part of its application process with the City of Ottawa, Hard Rock Ottawa will be participating in a formal public consultation, details for which can be found at hardrockottawa.com.

Whats in it for the horse

Whats in it for the horse people is another track owner with no interest in the business. Good luck!

I was at Rideau on opening

I was at Rideau on opening night, September 1, 1962, as a 13 year old. There was a lingering smell of raw, moist concrete permeating throughout. Having moved away shortly after, I returned with my Dad once a summer, and always felt RCR failed to reach its market potential. In recent years, living two hours away, I feel RCR should be a much better gaming, entertainment option. Yes, dining room is very reasonably priced and does well, but that is all. The rest has been sub-par. Maybe Hard Rock will commit some investment and energy to an OK racing product. Especially in summer, RCR should be a party spot. I still think it can be done with creative marketing and market out-reach.

You know what's in it for

You know what's in it for horsepeople? An opportunity to keep the track viable and put our product in front of thousands of potential new fans. Upgrades and improvements are being made in the backstretch, but as usual the hands are out wanting Rideau to spend millions of dollars for what? If you still don't get that the onus is on us, horsepeople, to work to improve our situation, I don't know what it will take.

I'll believe it when I see

I'll believe it when I see it, when it comes to "Hard Rock Ottawa" having any commitment to the horseracing here. Race dates were reduced again this year, making it almost impossible to own a racehorse in Eastern Ontario and Western Quebec without travelling to Southern Ontario. Increasing purses in September then reducing dates is hypocritical and shouldn't be tolerated by the horsemen whatsoever.

Doesn't appear to be much for

Doesn't appear to be much for horsepeople to get excited about. With fewer race dates each year (it seems), it is already impossible to make a living racing horses. Racing at Rideau simply cannot take many more steps backward.

Let me answer this one for

Let me answer this one for Hard Rock...

Mr. Retallick: Grandstand... for what? The 25 people (age 50 to 85... I'm one of them :) who are sitting there watching the races? Horses take a back seat. You're lucky to be able to run at a loss every year. For a new paddock and barns, since you are operating at a loss, do you think the association would allow for a 10% of purses to cover the cost? If not, who do you want to push that invoice to?

Mr. Simard, what's in it for horsepeople: What about you get to continue to race even if you're at a deficit every year because the intake does not cover the purses and the overhead to run the track? Isn't that amazing? Would you run your business at a loss Mr. Simard?

I'm an horse owner and want nothing more than to get more money invested in our sport, but the truth is that we have a great deal, and are lucky to be still alive and running. I'm tired of seeing people ask ask ask but never give. It's our turn to give back and find ways to get new people to watch our sport. With the Hard Rock investment we should be able to bring a younger crowd to our game, which is a must to be able to continue increasing our intake year after year.

So instead of complaining and asking for free money again, just say thanks once in a while for the people that have been and are still working at making our sport better each and every day, andto huge companies willing to inject new money around our structure for which we will benefit as horsepeople for years to come.

In reply to It's really nice investment by the cat1234

You are not the reason people

You are not the reason people are going there now. You are not the star of the show, or the center piece of it all. You are going to benefit from the spill over of the new attraction. Truth be told, you are lucky they decided to award this to Rideau at all. The grandstands are vacant half of the time as it is. Unfortunately this casino is going to be like the Scotiabank Place/Corel Center or whatever they call it now. It is way out of the way and not really in the best area for the general public to get to as it is. Lac Lemy is minutes from downtown Ottawa, where 90% of the tourists are, and will still be the place they go for casino needs.

If I was a horseman, I would have been pushing for a real sports bar/teletheater in the old Real Sports location in the Covent Garden Market. Your handle would sky rocket as all the teletheaters closing in Ottawa serviced a lot of folks, and you would be in the middle of all the action for the tourists.

I REALLY love the Sunday night cards you put on there Mr. Simard as I find it to be some of the better 5/8th racing around. I am not really thrilled with other 5/8th tracks but do enjoy me some RCR. I really hope the braintrusts there in Ottawa read this, and get it together for the benefit of the horsemen there as I like the product they produce.

I read this article and see

I read this article and see NO comments on new barns, paddock, or grandstand in it?
Always, the horses take a back seat.

It's really nice investment but what is in it for the horsepeople?