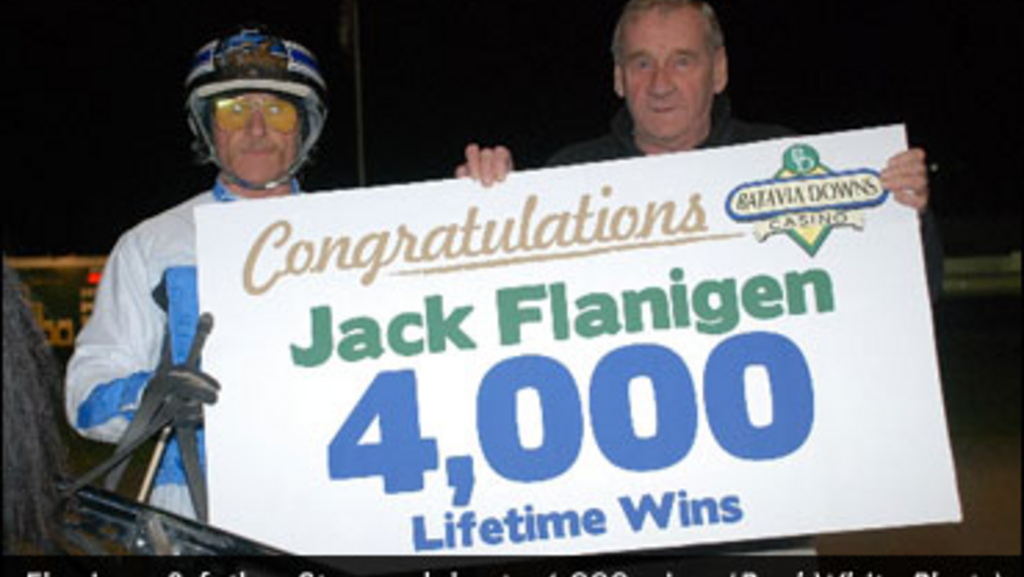 Reinsman Jack Flanigen became the newest member of the 4,000-win club when he guided Frank Zambito’s All Got In to victory in the ninth race on Friday night at Batavia Downs.

The 46-year-old Flanigen started the Friday program with 3,998 wins and moved closer to the milestone when he came from off the pace to score with Carl Monti’s Need Help Here in the second race.

Following his father, trainer-driver Steve Flanigen, in the harness racing business, Flanigen began his career in 1984. His first win came at the Lake Shore Meadows, a defunct racetrack in Erie, Pennsylvania.

By 1990 Flanigen was one of the most sought-after catch-drivers on the Western New York harness racing circuit. During the '90s he drove in 11,899 races and won 2,279 times. In 1996, he brought home 271 winners. During his career, the horses he has driven have earned more than $11.4 million in purses.

Flanigen was the leading driver at the Downs in 2011, a year he made 305 winner's circle visits, a personal best.

“It’s a great accomplishment,” said Steve Flanigen. “I knew when he first started out he had the talent. I’m really happy for him. That's a lot wins on this circuit."

For the low-key reinsman, reaching the 4,000 plateau couldn’t have come fast enough.

“It’s been a bit overwhelming. I’m glad it’s over,” he said.

Flanigen was quick to praise his father.

“He taught me everything I know about the business. It was nice having him in the winner's circle with me.”

As far as hitting 5,000 wins, Flanigen will take it one night at a time.

“You never know," he said. "If I can stay healthy, I’ll definitely be out competing.”