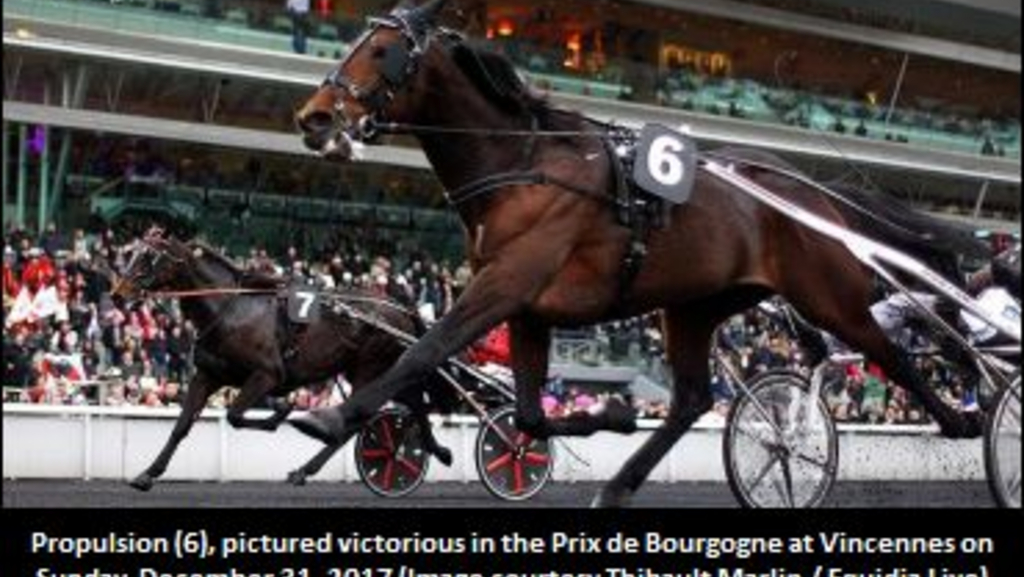 On Sunday (December 31), Propulsion, the six-year-old son of Muscle Hill that raced under the tutelage of trainer Tony Alagna while in North America, captured the Grade II €120,000 Prix de Bourgogne at Vincennes in a mile-rated 1:53.2.

Via the win, Propulsion has now gained entrance to the Prix d’Amerique, which will be raced on January 28 at Vincennes.

Propulsion faced off against a scratch-reduced 14 rivals in the 2,100-metre event (one mile and five sixteenths of a mile) and started from Post 6 behind the mobile starting gate.

Driver Ôrjan Kihlström gave his horse a front-end trip through the fractions, and it didn’t seem to faze the bay late, as Propulsion was steady, fluid and strong through the lane.

The Daniel Redén trainee did not seem bothered at all by the fact that the great Bold Eagle – last year’s winner that will be searching for his third consecutive Prix d’Amerique next month – closed through the middle of the track with a solid late kick to finish second for pilot Franck Nivard. The Matthieu Abrivard-driven Briac Dark finished third.

Propulsion, who sold for a quarter-million dollars at the Lexington Selected Yearling Sale in 2012, was later sold to Swedish interests in the 2015 Meadowlands Summer Mixed Sale for $210,000.

Propulsion, bred by Fredericka Caldwell of Georgetown, Kentucky, and Bluestone Farms of Hopewell, New Jersey, is out of the Hambletonian Oaks-winning Andover Hall mare Danae, and is a full brother to Dream Together and a half brother to Dorsay.