Trainers Weigh In On Alberta Stakes 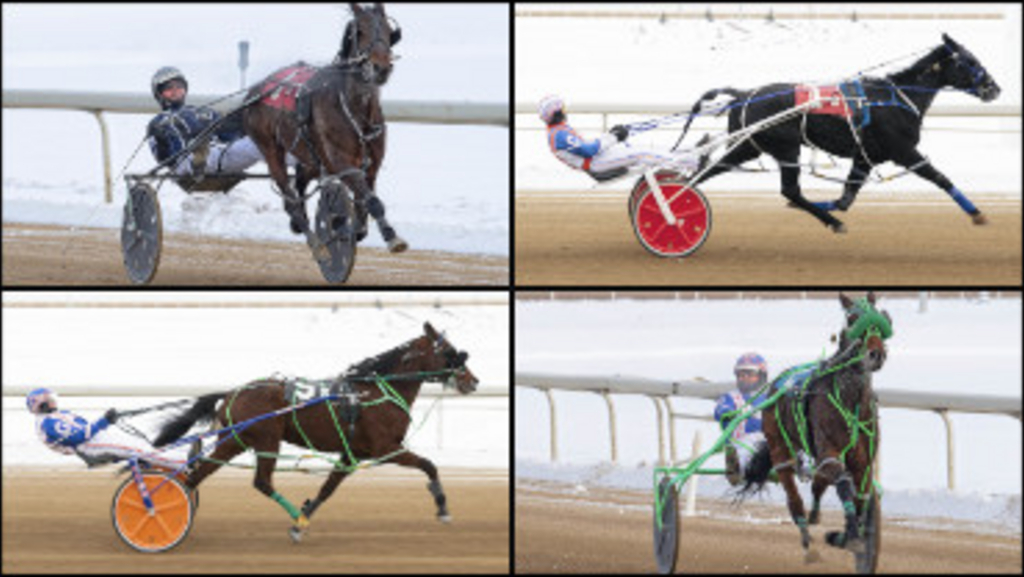 Pushed back by an equine virus, two elimination legs -- originally scheduled for November 27 -- for both races were held this past Saturday morning after frigid temperatures forced those eliminations to be pushed from Friday night. There was no wagering and there were no fans other than horsepeople.

The top four finishers in each elimination made it to the finals. The ninth starter in both the Derby and the Filly Pace will be drawn by lot between the fifth-place finishers. The first-place finishers in the two eliminations for both finals will draw to see who gets the rail and who gets post two. The other positions will be a random draw.

“Sunshine Boy exceeded my expectations,” said the horse’s trainer/driver, Brandon Campbell, after Sunshine Boy got a perfect trip popping out of the two-hole down the stretch to win his elimination for the Derby by 2-1/2 lengths in 1:55.4. “I wasn’t sure how tight he would be. He got the virus so we gave him plenty of time to get over it. He’s had lots of jogging but not much training.”

He also hadn’t raced since November 19.

“I thought he raced super. I’m very happy with him,” said Campbell after he tagged along behind Samba Beat for most of the race.

“We were always high on Sunshine Boy,” said Campbell of the horse owned by Jodi Loftus, Dana Shore and George Rogers. Shore is also the breeder of Sunshine Boy. “He always had a lot of talent but he was a runaway -- he was hard to manage. He’d get to the top of the stretch and he’d start looking at things. He also didn’t pace strong down the lane. But then the light switch went on and he figured out what he’s supposed to be doing. We taught him to finish.”

The elimination victory was his ninth win in 25 career starts.

Earlier this year, Sunshine Boy won the $74,870 Ralph Klein final at Calgary’s Century Downs when he was sent away at 14-1. He won’t be close to those odds on New Year’s Eve.

“He’ll get an inside draw for the Derby which will help a lot,” said Campbell. “I hope he comes up with the same type of performance in the final and I think he will. He’ll be tough.”

The other Derby elimination on Saturday was taken by Nevada Vacation, who avoided interference going into the first turn, also got a perfect trip and ended up winning by a length and a half in 1:57.3 --- albeit almost two full seconds slower than Sunshine Boy.

“The first quarter was slow. The half was slow. Everything about the race was slow. But they don’t put that on the purse cheque so that’s okay,” said Nevada Vacation’s trainer and co-owner Chris Lancaster.

Codename Cigar Box, who didn’t avoid the interference when Carro B Bunsen broke stride and got tangled up with Momas Son Byrne, took second.

“It definitely cost him the win,” said Codename Cigar Box’s trainer/driver and co-owner Kelly Hoerdt. “When (Carro B Bunsen) broke stride, he created havoc for me and (Momas Son Byrne). But Codename Cigar Box finished really well so I was happy with that.”

“Nevada Vacation has been a nice consistent colt,” said Lancaster. “We bought him at the Alberta Yearling Sale for $16,000. He was a very stocky stud when I bought him for myself and Chris Lambie. But he was a very spooky horse. He would see ghosts. He’s gotten better with age and I think he’s only going to get better. He’s setting up to be a nice horse.”

“I thought it was a perfect prep for the final,” said Exotic Dragon’s trainer/driver Nathan Sobey, who has had an outstanding year. “She wasn’t too stretched out. She didn’t have to stress. There was still lots left in the tank. She was well in control.”

“Graceful Horizon is an awfully nice filly,” said Lancaster of the horse he owns with Derek Gilbert and his mother Velda Olding. "She’s a player.”

“She doesn’t need the front end to win but it would be nice to get the rail,” said Lancaster. “The worst she could do is start from post two.”

As he has maintained all year, Sobey said the Filly Pace will come down to three horses: his horse Exotic Dragon, Burning Hot and Graceful Horizon.

“Those three have been ultra tough all year. Any one of them can pull it off. Exotic Dragon is going to come back on December 31 and be really tough. But I expect the same out of the other two. It should be a great race.”

So should the Derby.

(With files from Curtis Stock / thehorses.com)