On Wednesday, December 21, Standardbred Canada announced the finalists for the 2011 O’Brien Awards, which honour Canada’s best in harness racing over the past season 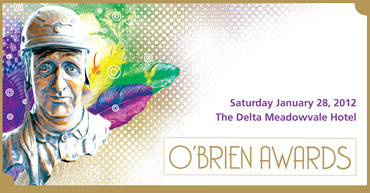 The awards are named in honour of the late Joe O’Brien, an outstanding horseman and a member of the Canadian Horse Racing Hall of Fame. The winners will be announced at the annual O’Brien Awards Banquet on Saturday, January 28, 2012.

Jamieson, 35, of Moffat, Ont., is looking to take home his third title as Canada’s driver of the year following an exceptional season. Jamieson has put together some of his best numbers in 2011. He leads all Canadian harness drivers with over $11.4-million in purse earnings. He made 461 trips to the winner’s circle, captured his second North America Cup and secured his second World Driving Championship title. Jamieson was the regular driver for O’Brien finalists Frenchfrysnvinegar, Monkey On My Wheel, Up The Credit and Warrawee Needy.

Waples, 46, of Milton, Ont., a three-time O’Brien winner as the country’s top reinsman, also had an outstanding year, driving 221 winners and horses to over $8.5 million in purse earnings. Waples is the regular driver for San Pail, the unanimous choice for Older Trotting Horse of the Year, along with O’Brien finalist China Pearls.

Zeron is a finalist in the Driver category for the second consecutive year. The 22-year-old resident of Oakville, Ont. tops the charts for Canadian drivers in dash wins with 536 victories to his credit. He’s bankrolled in excess of $8.1-million in purses, almost double his 2010 total. Zeron drove numerous stakes winners this season, including the Battle of Waterloo winner Machapelo.

The Trainer of the Year category has shaped up as a battle between two first time nominees, Jeff Gillis and Tony O’Sullivan.

Gillis, 34, of Hillsburgh, Ont., has enjoyed a productive year, conditioning 108 winners and training horses to over $3.8 million in purse money. His stable was led by the standout three-year-old pacing colt Mystician, a winner of $695,000 this season and Breeders Crown champion Frenchfrysnvinegar, who is a finalist for an O’Brien trophy in the Older Trotting Mare category.

O’Sullivan, 35, of Cambridge, Ont., also enjoyed an outstanding season, sending 120 winners postward and training horses that earned over $3.8 million. O’Sullivan, a native of New Zealand, started a record 11 horses in the Breeders Crown finals at Woodbine Racetrack on October 29. He managed to collect two seconds, a third and a fourth-place cheque. Some of his top performers include sophomore pacing colt Alsace Hanover, a winner of over $872,000, and pacing mare Maureen Rocks, a winner of over $164,000 that was the runner-up in her Breeders Crown final. O’Sullivan conditions 40 horses and is based at Classy Lane Training Centre in Puslinch, Ont.

Keith Clark, 58, of DeWinton, Alta., will attempt to secure his second O’Brien trophy in the O’Brien Award of Horsemanship category. Clark won the award in 2004, and is up against first-time nominee Marc Campbell, from Winsloe, PEI.

Clark, who was inducted into the Canadian Horse Racing Hall of Fame in 2009, annually posts solid training and driving numbers. 2011 marks the sixth consecutive year he’s surpassed the $1-million mark in earnings as a trainer, while sending out 172 winners from his barn this year. On the driving side, he clicked for 164 wins and eclipsed the $1-million marker for the seventh straight season. Clark is the leading trainer at three racetracks this year --- Alberta Downs in Lacombe, Alta., Northlands Park in Edmonton, Alta., and Fraser Downs in Surrey, BC. His driving talents are equally as impressive as he is the leading driver at Alberta Downs and Northlands in 2011.

At just 27 years of age, Campbell has proven himself to be one of the top horsemen in the Maritimes. This year he’s the leading dash-winning driver at Red Shores Racetrack and Casino at Charlottetown Driving Park and Summerside. To date he’s driven 172 winners and horses to in excess of $354,000 in purse money. On the training side, he sits in second at the Charlottetown Driving Park and third at Summerside. Campbell, in his ninth season as a trainer, conditioned 56 winners and trained horses to over $177,000 in earnings.

Two fillies that exemplified consistency throughout their freshman campaigns are nominated in the two-year-old pacing filly division --- American Jewel and Economy Terror.

American Jewel won eight of nine races and over $669,000. Three of her wins were on Canadian soil, including a World Record 1:50.2 at Mohawk Racetrack when she won the Shes A Great Lady Stakes. Economy Terror notched eight wins and three seconds in 11 starts for $924,437 in purse earnings. The Western Terror filly closed her juvenile campaign with victories in her Breeders Crown final and the Three Diamonds.

A Rocknroll Dance won seven of 11 races and $858,961 this season. He scored several stakes victories, including a win in his Metro Pace elimination where he equalled the World Record of 1:49.1. He finished his season strong with back-to-back wins in the Governors Cup elimination and final.

Warrawee Needy won nine of 12 races and netted $535,000 during his juvenile campaign. The E Dees Cam colt put together a six-race win streak during June and July. He won seven Ontario Sires Stakes events, including his OSS Super Final where he trounced his competition by cruising to a nine-and-three-quarter-length victory.

The nominees for Three-Year-Old Pacing Filly of the Year are Monkey On My Wheel and See You At Peelers.

Monkey On My Wheel was a $5,500 purchase at Standardbred Canada's 2009 Spring Mixed Sale. She’s developed into a profitable investment, as she has won seven races and over $816,000 this year. She captured wins in three Ontario Sires Stakes events and the elimination and final of the Canadian Breeders Championship. On October 29, the daughter of Mach Three scored her richest payday when she won her Breeders Crown final in a career-best time of 1:49.3.

The Bettors Delight filly See You At Peelers won nine of 13 races and $910,000 for her connections. She recorded victories in the Fan Hanover, Tarport Hap and Valley Forge, and beat the boys in the Art Rooney. She was also the leading money-winning sophomore pacing filly in North America this season.

Betterthancheddar, another Bettors Delight offspring, and Up The Credit are the nominees in the three-year-old pacing colt division.

Betterthancheddar won 10 races, $777,116 in purses and had an outstanding fall season on the racetrack, during which he struck for victories in the elimination and final of the Breeders Crown, the American National and the Windy City.

Up The Credit, a winner of eight races and $1,118,953, scored his richest payday in the $1.5-million Pepsi North America Cup. He also captured the Somebeachsomewhere in a career-best 1:49 and took a division of the Simcoe Stakes and the final of The Diplomat.

Dreamfair Eternal is looking for her third consecutive trophy in the Older Pacing Mare category, and this time around she’s up against Anndrovette.

Dreamfair Eternal won eight races and $688,755 this season, picking up wins in the Ellamony, Masters and the Roses Are Red final at Mohawk, her biggest payday of the season.

North America’s leading money-winning aged pacing mare, Anndrovette, won 11 races and $747,338 during a stellar season which saw her win the Betsy Ross, the Artiscape, the Spring of Hope, an elimination of the Milton and an elimination and the final of her Breeders Crown division.

Foiled Again hit the board for top-three finishes in 25 of his 28 races and netted $1,400,937 this season to top the earnings chart for his division. He captured numerous stakes events on both sides of the border, including the Molson Pace at The Raceway at the Western Fair District and an elimination of the Canadian Pacing Derby.

U.S.-based Check Me Out will vie for the O’Brien trophy in the two-year-old trotting filly category against the Canadian-based Circles.

Check Me Out was North America’s leading money-winning filly with $898,343 in earnings collected from 14 wins and two second-place finishes. She won every stakes event except the Peaceful Way. Her impressive resume boasts wins in the Reynolds, Tompkins, Merrie Annabelle, Pennsylvania Sire Stakes, Champlain, Breeders Crown and Matron. She set a World Record of 1:53.2 at Dover Downs while winning an elimination of the Matron by 16-and-a-half lengths.

Circles won six of 11 races and trotted to $325,117 in purse earnings. All six of her victories were in Ontario Sires Stakes competition, where she finished second in her division in the earnings standings.

Possess The Will and The Game Plan are the two-year-old trotting colt finalists.

Possess The Will won seven races and $551,577 with victories in his Breeders Crown elimination, and the elimination and final of the Valley Victory. Included in The Game Plan’s eight-win, $490,300 season were wins in the elimination and final of the William Wellwood Memorial and five Ontario Sires Stakes events. The Game Plan topped the overall earnings chart in his Ontario Sires Stakes division.

Cedar Dove and China Pearls will face off in the three-year-old trotting filly category.

Cedar Dove won seven races and $544,410 while notching wins in several stakes events, including the Kentucky Futurity and the Breeders Crown. China Pearls’ eight wins and $511,905 in purse earnings were highlighted by wins in the elim and final of the Canadian Breeders Championship, the SBOA and the OSS Super Final.

Millionaires Broad Bahn and Daylon Magician are the finalists in the three-year-old trotting colt division. Broad Bahn’s biggest victory from his five wins came in the $1.5-million Hambletonian, his richest payday for his $1,325,175 season.

The ultra-consistent Kadabra colt Daylon Magician won 11 of 17 races and $1,068,813. He topped the earnings charts and picked up seven wins in Ontario Sires Stakes action. He scored a career-best 1:52.3 win in the Canadian Breeders Championship which kicked off a seven-race win streak and included victories in the elimination and final of the Canadian Trotting Classic.

Older trotting mares Action Broadway and Frenchfrysnvinegar are O’Brien Award finalists and were one-two on the earnings chart for their division.

Action Broadway won 10 races and $529,373 and picked up victories in the Armbro Flight final, the Muscle Hill final and the Miss Versatility Stakes. Frenchfrysnvinegar, a regular campaigner in the Woodbine Entertainment Group’s preferred mare ranks, won eight races and $351,825. She capped a productive season with a stirring victory in her Breeders Crown final despite having started from Post 10.

San Pail was the unanimous choice as Canada’s Older Trotting Horse of the Year, and picks up his third consecutive trophy in this division. The son of San Pellegrino dominated Canadian harness racing this season, topping the charts for older trotting horses in North America with over $1.2-million in earnings and 14 wins from 16 races, highlighted by victories in every stakes event he entered. He scored 11 of his wins and earned $934,920 in Canada, between Mohawk and Woodbine. His stakes wins included the elimination and final of the Glorys Comet, the Maple Leaf Trot, the Nat Ray, the Credit Winner, and the Allerage Trot. His final moment of glory for 2011 came in the $602,340 Breeders Crown Open Trot at Woodbine on October 29, where he took on a world-class field, which included two European stars, and trotted to an exciting 1:51.4 neck victory.

Seelster Farms Inc. and Warrawee Farm are the finalists for the Armstrong Breeder of the Year Award. The Lucan, Ont.-based Seelster Farms had 154 starters in 2011 that netted 281 wins and earnings of over $2.7 million. Some of their $100,000 + earners included Prodigal Seelster, Traverse Seelster and Adaymer Seelster. Warrawee Farm in Rockwood, Ont. had 31 starters that won 101 races and $2.4 million this season. Mystician, Warrawee Needy and Mister Herbie were all $100,000 + performers bred by Warrawee Farms.

One of the 23 horse nominees will be recognized as Canada’s Horse of the Year. The winners will be announced at the O’Brien Awards banquet on Saturday, January 28, 2012, at the Delta Meadowvale Hotel in Mississauga, Ont.

Monkey On My Wheel

See You At Peelers