Sunday’s installment of the Open Handicap Pace was the final one for the 2021 racing season at Saratoga Casino Hotel. Closing week for the meet got underway on Sunday and the $15,000 feature saw Lake Charles score an Open victory for the third time at the Spa this year. 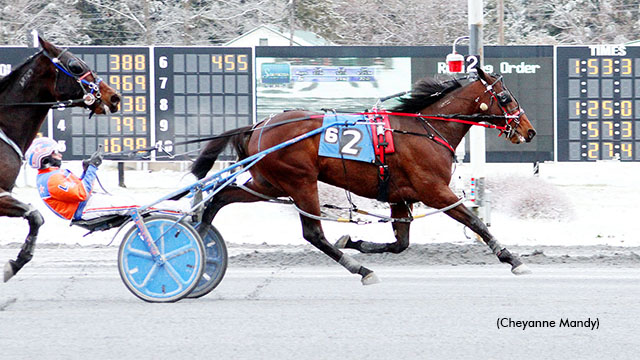 Trainer Amanda Kelley will wrap up the ’21 season with more Open Pace wins than any other conditioner at the Spa as she secured her seventh victory.

Her Some Waratah A won four Opens earlier in the meet and has passed the baton to Lake Charles this fall who has taken it and ran.

On Sunday, Lake Charles had Leon Bailey at the controls and paced out to the lead in :27.4 in the early going. After reaching the half in an honest but manageable :57.3, the four-year-old son of Well Said was put to the test by a first-over rival and those two went through a third quarter of :27.2 before Lake Charles rebuffed that one’s challenge, winning in 1:53.3.

Pocket-sitting Elite Retreat (Jimmy Devaux), who made his debut in the Open on Sunday, was no match for Lake Charles in the stretch but finished a strong second to the winner, who paid $7.50 as the race’s second choice in the betting. Elite Retreat completed a $47.40 exacta while another longshot, Andreios Kardia (Larry Stalbaum), finished third and pumped the triple up to a hefty $262 in the six-horse feature.

Lake Charles is owned by the Scheigert Racing Stable of Saratoga Springs.

For Bailey, it was his second Open win of the year at the Spa. His first Open Pace score came in November behind the John Podres-trained Repeal Or Replace, who Bailey piloted to another score on Sunday in the $13,000 Winners Over for pacers.

Live racing continues on Monday afternoon with a matinee starting at 12 noon.

(With files from Saratoga)