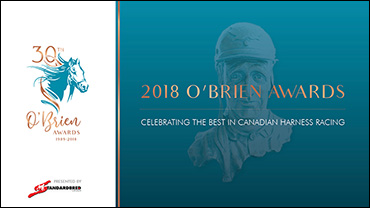 On Tuesday, December 18, Standardbred Canada announced the finalists for the 2018 O’Brien Awards, which honour Canada’s best in harness racing over the past season.

The winners will be announced at the annual O’Brien Awards Black Tie Gala on Saturday, February 2, 2019, at the Hilton Mississauga/Meadowvale hotel in Mississauga, Ont. 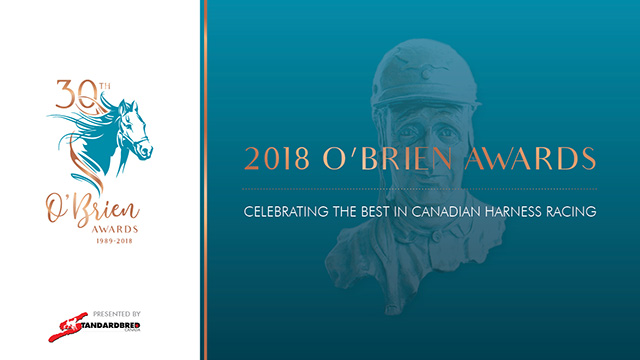 This will mark the 30th edition of the O’Brien Awards, named in honour of the late Joe O’Brien, an outstanding horseman and member of the Canadian Horse Racing Hall of Fame.

Casie Coleman and Richard Moreau, both five-time winners of O’Brien Awards as Trainer of the Year, are finalists for the 2018 title.

Cambridge, Ont. resident Casie Coleman, the winningest female trainer in the sport, had a solid 2018 campaign led by superstar pacer McWicked, who is looking for his first O’Brien in the Older Pacing Horse category, and Stag Party, who is a nominee for Two-Year-Old Pacing Colt of the Year. Coleman has trained 43 winners and horses to $3.1 million in earnings to date in 2018.

Richard Moreau of Puslinch, Ont. has earned five consecutive titles as Canada’s Trainer of the Year. He put up some incredible numbers in the 2018 season, as he sent 305 winners postward and trained horses to more than $4.5 million in earnings, a new personal best.

Bob McClure and Louis-Philippe Roy, who are both en route to career seasons, are the Driver finalists.

Bob McClure of Elora, Ont. is en route to a career-best season, as he has driven 317 winners and horses to more than $5.1 million in purse money. McClure, a finalist in this category in 2016, transitioned to the Woodbine circuit in the winter of this year and hasn’t looked back. He’s driven more winners than any other driver in Canada over the past two seasons, and currently sits in the top three in the driver standings for wins (third) and earnings (second) in Canada.

In 2016, Louis-Philippe Roy, a native of Mont-Joli, Que. who now makes his home in Guelph, Ont., won the Future Star Award. It was a sign of things to come, as his ascension up the driving ranks has been phenomenal. In 2017 he was a full-time driver on the WEG circuit and a finalist for Canada’s Driver of the Year. His nomination for the 2018 season is a result of a career year that includes a total of 408 wins with purse earnings in excess of 7.3 million while topping the Canadian driver charts for both wins and earnings.

Rick Zeron, a three-time winner of the O’Brien Award of Horsemanship, is up against Guy Gagnon, who was also a finalist in this category last year.

Although some may consider that he’s in the twilight of his racing career as a trainer-driver, 2018 may have just been one of the most memorable seasons on record for horseman Rick Zeron of Oakville, Ont. Zeron, a winner of the O’Brien Award of Horsemanship in 2010 and 2016, continues to compete at the highest level, and in 2018 conditioned Atlanta, the winner of one of the sport’s most coveted races, The Hambletonian, with Zeron’s son, Scott driving. On the training side, Zeron had 37 wins and almost $1.65 million in earnings, and his driving stats included 34 wins and more than $702,000 in earnings.

Guy Gagnon of Gatineau, Que., is a regular trainer-driver at Hippodrome 3R and Rideau Carleton Raceway, where he is at the top of the driver's standings for wins in 2018. To date this year, Gagnon has driven 206 winners and horses to earnings of more than $1.1 million. On the training side, he’s sent 58 winners postward from his stable while earning in excess of $340,000.

Prescient Beauty and Tall Drink Hanover are the nominees in the Two-Year-Old Pacing Filly division. Prescient Beauty hit the board in 11 of her 13 season starts while netting almost $470,000. She was a top-three finisher in several stakes and concluded her season with a season’s best 1:50.4 victory in the Three Diamonds at the Meadowlands Racetrack.

The Captaintreacherous filly Tall Drink Hanover was a top-three finisher in all but one of her 11 races and earned more than $455,000. She swept the Whenuwishuponastar, the Shes A Great Lady, and won a division of the Eternal Camnation at Woodbine Mohawk Park.

Bronx Seelster and Stag Party are the finalists in the Two-Year-Old Pacing Colt division. Bronx Seelster scored seven wins and earned in excess of $383,000 from 12 races. Three of his wins were in Ontario Sires Stakes events and he also swept the Battle of Waterloo at Grand River Raceway.

Stag Party, a son of Bettors Delight, hit the board in all nine of his seasonal starts and earned almost $670,000. Among his victories were two Ontario Sires Stakes events, and the elimination and final of the lucrative Metro Pace at Woodbine Mohawk Park.

Kissin In The Sand and Shower Play are the finalists for Three-Year-Old Pacing Filly of the Year. Kissin In The Sand scored 10 wins and earned more than $884,000 while notching victories in The Lynch, her Pennsylvania Sire Stakes Final, the Bluegrass and Tattersalls before ending her season with a runner-up finish in the Breeders Crown.

The Three-Year-Old Pacing Colt category was one of the most competitive in recent years. Two standout colts, Jimmy Freight and Lather Up, are finalists for the Canadian title.

Jimmy Freight, a son of Sportswriter, won 11 races and more than $834,000, while collecting victories in all five Ontario Sires Stakes races he competed in, including his season-ending Super Final. He also won eliminations of the Messenger and Progress Stakes, and finished his season with a runner-up finish in the Progress Final.

The Ohio-bred Lather Up won 11 races and more than $1 million in his sophomore season. Undefeated on Canadian soil, he won a division of the Somebeachsomewhere, and the elimination and final of the North America Cup. Stateside, he scored wins in eliminations of the Hempt, and The Little Brown Jug, and several Ohio Sires Stakes.

Caviart Ally and Exhilarated will compete for Older Pacing Mare honours. Caviart Ally won seven races and more than $374,000. She swept the Milton Stakes and posted a season’s best 1:48.3 in her elimination. Exhilarated was a warhorse in 2018, racing 44 times from January through December while winning 11 races and $211,000 in purse money. She was a regular competitor in the Fillies and Mares Preferred ranks at Woodbine Mohawk Park.

Two of Canada’s top pacers, McWicked and Nirvana Seelster are the finalists in the Older Pacing Horse category. Now seven, McWicked was never better than in his 2018 season, as he won 12 races with earnings exceeding $1.6 million. Some of his major stakes victories included the Canadian Pacing Derby and the elimination and final of the Ben Franklin. He finished the season with a five-race win streak that kicked off with the Allerage Open Pace at the Red Mile, included the Breeders Crown, and concluded with the TVG Pace.

Nirvana Seelster has become of the country’s most popular and talented older pacers. The seven-year-old son of Camluck won nine races and more than $245,000 this year while primarily competing at the Preferred level at Woodbine Mohawk Park.

HP Titania Runner and The Ice Dutchess are the Two-Year-Old Trotting Filly finalists. HP Titania Runner, a daughter of E L Titan, won four Ontario Sires Stakes, including her OSS Super Final and $248,000 during her juvenile campaign. The Ice Dutchess won five races and $472,000. She swept the Peaceful Way Stakes at Woodbine Mohawk Park and won her Bluegrass Stakes division at the Red Mile.

The rookie trotting colt finalists are Dream Nation and Forbidden Trade . Forbidden Trade won seven races and $300,000, including his Ontario Sires Stakes Super Final and four additional OSS events. Dream Nation won six races and more than $205,000. Included in his victories were three Ontario Sires Stakes wins and the elimination and final of the Balanced Image Stakes at Hanover Raceway.

Atlanta and Illusioneesta are the nominees for Three-Year-Old Trotting Filly of the Year. Hambletonian champion Atlanta won eight races and more than $1 million in 2018. The Chapter Seven filly never finished worse than third during the season, and along with her coveted victory in the Hambo, she added wins in the Kentucky Filly Futurity, her Breeders Crown elimination, Empire Breeders Classic elimination and final and two New York Sires Stakes events to her resume.

The Kadabra filly Illusioneesta won four races and more than $241,000 in 2018. Two of those wins were in Ontario Sires Stakes events.

In the Three-Year-Old Trotting Colt division, two colts who battled one another in many Ontario Sires Stakes events are the nominees – Run Director and Stormont Ventnor. Run Director had six wins and purse earnings exceeding $436,000. Four wins came in OSS events, including his OSS Super Final. Stormont Ventnor had four wins, two of those in OSS events, along with $268,000 in purse money.

It’s a rerun of the 2017 awards, with Emoticon Hanover and Hannelore Hanover back as finalists in the Older Trotting Mare division for the 2018 season. Emoticon Hanover won six races and more than $397,000 during her five-year-old campaign. She put an exclamation mark in concluding her stellar season with a three-race win streak that included the elimination and final of the Breeders Crown and the TVG for trotting mares.

Defending champion Hannelore Hanover had another solid season with six wins while adding $403,000 to her purse account. ‘Hannelore’ swept the Armbro Flight Stakes at Woodbine Mohawk Park and also scored wins in the Cutler Memorial and Miss Versatility.

Dancer Hall and Will Take Charge are competing for Older Trotting Horse honours. Dancer Hall finished first or second in 18 of 22 races and earned almost $285,000. He predominantly competed at the Preferred level at Woodbine Mohawk Park, and also scored a victory in the Earl Rowe Trot at Georgian Downs.

Will Take Charge won nine races and more than $492,000. The son of Kadabra eclipsed a million dollars in career earnings in 2018 and scored victories in the Maxie Lee Memorial Invitation and the Crawford Farms Open Trot.

In the Armstrong Breeder of the Year category, Seelster Farms and Warrawee Farm are the finalists. Lucan, Ont.-based Seelster Farms bred horses who earned in excess of $3.4 million in 2018, including O’Brien finalists Bronx Seelster and Nirvana Seelster.

Warrawee Farm, a boutique breeder in Rockwood, Ont., bred horses that earned more than $1.3 million in 2018, including Warrawee Ubeaut, who became the fastest freshman pacer in the history of the sport with a sizzling 1:48.3 victory in the International Stallion Stakes at the Red Mile.

Two talented young trainers are the finalists for the Future Star Award, Kyle Bossence of Arthur, Ont. and Chris Lancaster of Airdrie, Alta. Bossence has trained 41 winners and horses to earnings exceeding $231,000 while competing primarily at Flamboro Downs, Georgian Downs and The Raceway at Western Fair District.

Lancaster has conditioned 29 winners and horses that have earned $214,000 while racing at Century Downs and Northlands Park. Lancaster also trained the stakes-winning two-year-old pacing filly Rockin Mystery for the latter part of her season, which included an Alberta Sires Stakes Super Final victory.

One of the 24 horse nominees will be honoured as Canada’s Horse of the Year. The winners will be announced at the O’Brien Awards Gala on Saturday, February 2, 2019, at the Hilton Mississauga/Meadowvale Hotel in Mississauga, Ont.

(*statistics are as of end of day December 17).

A complete list of the finalists and their respective owners follows.

Kissin In The Sand

Owned by Adriano Sorella, Guelph, ON

Owned by Auciello Stables, Stouffville, ON

All the Best to all the

All the Best to all the nominees.