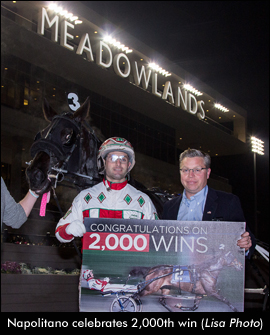 Napolitano moved within one win of the milestone mark when he guided the ninth race favourite, Dancin Hill, to a narrow pocket victory, defeating Escape The News on the line in 1:51.4 for the Mark Ford stable.

The 34-year-old reinsman earned his 2,000th career win in his next drive aboard pacer Alex Bullville in the 12th race. Napolitano sent the popular Stephen Crevani trainee to the lead down the backstretch and urged him home to post a two and quarter length victory over Some Major Beach in 1:52.1.

Back to back quality starts behind the potential Horse of the Year ensures inheriting the role of favouritism in your next start. That was certainly the case with Rodeo Romeo, who was bet down to five cents on the dollar in the third race at The Meadowlands on Saturday night.

The prohibitive choice did not disappoint, powering away to a near five-length victory in a very sharp 1:50.3.

Rodeo Romeo had finished fifth in his previous two tries in the Progress Pace at Dover Downs behind Meadowlands Pace champion Wiggle It Jiggleit. Prior to that, he was an easy winner in the non-winners of two condition at The Meadowlands, the level he returned to on Saturday night, where he romped again.

Driven by Brett Miller, Rodeo Romeo was asked for speed off the gate and he reached the lead prior to the opening quarter in :27.1. An outer flow developed, but the race favourite coasted through a :29.1 second panel before moving onto the far turn. In the meantime, Wegottatruckyea broke stride passing the five-eighths pole causing some confusion in behind, only enhancing the favourite’s prospects. Rodeo Romeo reach three-quarters in 1:23.4 and sprinted away from the field with a :26.4 final quarter to win while pulling away from the field in a lifetime-best 1:50.3. Midnight Lightning chased in futility while finishing in the runner-up spot, while Major In Life, who was bothered by the breaker on the far turn, made up a substantial amount of ground and rallied willingly to be third.

Rodeo Romeo is a three-year-old son of Rocknroll Hanover and is trained by Chris Ryder. The colt earned his second lifetime victory for his owners, Oompa’s Farm Inc., Robert Mondillo and Michael Day.

The feature race, a 'non-winners of $15,000 in last five starts' event for $16,500 kicked off the late Pick 4 and it included a very well-balanced field of nine. The post time favourite was Kingofthejungle at 2-1, despite the move up in class. He did not disappoint.

Kingofthejungle took over past the opening quarter and sprinted to the half-mile pole in :54.4, pacing the final turn in :27.1 before completing a back half-mile in just 54.2 seconds to establish a new lifetime mark of 1:49.1, one of the fastest miles of the young Meadowlands meet.

Kingofthejungled rebuffed a challenge from Shooters Dream throughout the stretch. That rival was riding the pocket behind the winner around the far turn and that pair scampered away from the rest of the field. But Shooters Dream could not get to the winner in the stretch and had to settle for the runner-up spot. Itrustyou finished third.

The winner, a four-year-old gelded son of Well Said, was driven by Andy Miller for trainer Mark Capone. He is owned by Fox Racing Inc. and Darius Oshidar.

The win was the 12th in the career of Kingofthejungle, whose earnings have now surpassed $270,000.

Sunfire Blue Chip, who earned over $700,000 as a three-year-old, returned to the winner’s circle for the first time since winning the Prix D’Ete last September, scoring in a mid-level condition pacing event on Saturday at The Meadowlands. The 2013 Adios winner made a strong brush to the half-mile pole and led the field all the way to the wire to score in 1:49.4 with Brett Miller in the sulky.

The win was the 17th in the career of Sunfire Blue Chip, whose lifetime earnings now stands at $924,374.

Jet Airway Back On Top

Jet Airway was making just his third start since the 2014 Breeders Crown eliminations. Following a pair of races where he was left with too much to do, Jet Airway was launched on the far turn and paced away in mid-stretch before holding on to win a mid-level condition pacing event at The Meadowlands.

Jet Airway earned over $300,000 as a three-year-old in 2014, but had not won since an Ontario Sire Stakes event in September of that campaign. He went over the $400,000 lifetime earnings mark.

The 1:50.2 triumph on Saturday night was the 11th from 33 starts in the career of Jet Airway for trainer Erv Miller, whose son, Marcus, steered the four-year-old to victory. The son of Jeremes Jet is owned by Erv Miller Stable, Tangie Massey, Paul Sunderhaus and Larry Agle.

Racing returns on Friday with first post time at 7 p.m. The double draw for the Friday and Saturday programs will take place on Monday, with the entry box closing at 9 a.m.