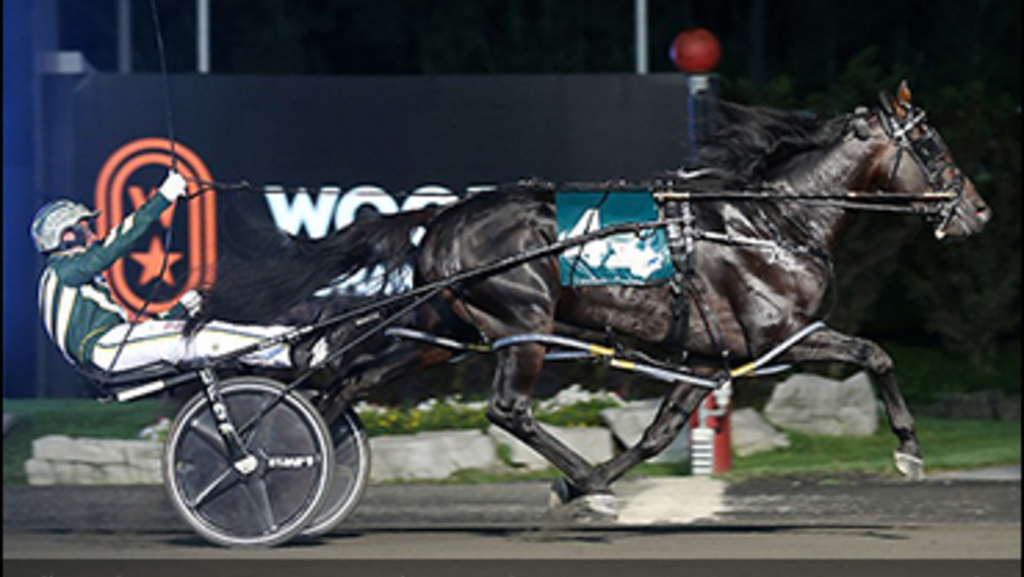 The connections of Tall Dark Stranger have confirmed that the top-ranked horse in harness racing has completed his on-track career.

After finishing a resolute second in the 2020 Breeders Crown Final at Harrah's Hoosier Park, there was some speculation that Tall Dark Stranger might race later this month in the TVG Free-For-All Final at The Meadowlands. Co-owner Judy Chaffee of Caviart Farms told Trot Insider that the connections have decided to shut their star Standardbred down.

"Everyone is in agreement that Tall Dark Stranger will not race again," said Chaffee. "He will be going to Hanover Shoe Farms to begin his new career there."

Tall Dark Stranger (#1), shown digging in late — as he had done so many times in his racing career — to repel a late challenge from Captain Barbossa in victory at The Red Mile.

Saying goodbye to Tall Dark Stranger certainly won't be easy for trainer Nancy Takter and Caviart's co-owners, Crawford Farms Racing of Syracuse, N.Y., Marvin Katz of Toronto, Ont., and Howard Taylor of Philadelphia, Penn. Horses like Tall Dark Stranger don't come around often, and Chaffee is hopeful that the second career for the 2020 Horse of the Year hopeful will provide more memories and highlights through his offspring.

"I think it is the right thing to do — have to admit, though, that these two years have flown by. I really don't know where the time went from when I first saw him as a yearling at Lexington — until now that he will be moving along to a career at stud. It has been a joy, though, traveling along with him on this wonderful journey. He has been such a joy! And we have so many incredible memories."

Tall Dark Stranger is the only horse to ever win the Metro Pace and Breeders Crown as a two-year-old and the Meadowlands Pace and North America Cup as a three-year-old. He swept divisional honours in 2019, winning the Dan Patch Two-Year-Old Colt Pacer of the Year in the U.S. and the O'Brien Award and Canada's Two-Year-Old Colt Pacer of the Year. He also posted wins in the Cane Pace, Tattersalls, Bluegrass and International Stallion. Four of his wins this year were clocked faster than 1:48.

His resume is the envy of many, and although Tall Dark Stranger's $330,000 yearling price came with certain expectations, Chaffee, for one, had visions of grandeur ever since setting eyes on the son of Bettors Delight and Precocious Beauty at the 2018 Lexington Selected Yearling Sale.

"You may recall me saying that when I saw him as a yearling, I turned to Buck and asked him, 'Is there such a thing as a horse being too perfect?' I remember that so clearly to this day. So, from that time until he raced, I always knew that he would be special — very special. And now I have that same faith that he will be following in his dad's steps in the stallion ranks. I can hardly wait to see his sons and daughters. And, of course, we will be supporting him.

"I feel convinced that he will not only pass along his racing talent, but also will pass on his 'heart' — that grit that makes him want to win — to beat every horse that comes near him."

Good for them. Nice to see

Good for them. Nice to see the horse's well-being put first. There is no point in chancing hurting him by racing again. He is too special.

As a fan I have to say this

As a fan I have to say this disappoints me. I realize it's part of the business. So much money to be made as a stud and what if something happens. Just the same as a fan you kind of like following certain horses and seeing how great they're going to be or could be. I'm glad they don't follow this philosophy in boxing or mixed martial arts. Imagine if they did. As soon as somebody in their prime or maybe not even in their prime yet said okay now I'm retiring and going to stud there's money to be had there. You'd have missed so many great matches. With geldings yes you miss seeing how good their children could be but at least you actually get to see how good they could have been without them checking out before their time. Wish him the best, but I'll have to admit one of my pet peeves though I love watching harness racing is that aspect of the sport.

If the Mohawk Million was a

If the Mohawk Million was a race for older pacers rather than for 2YO colt trotters, would TDS's connections still have retired him???