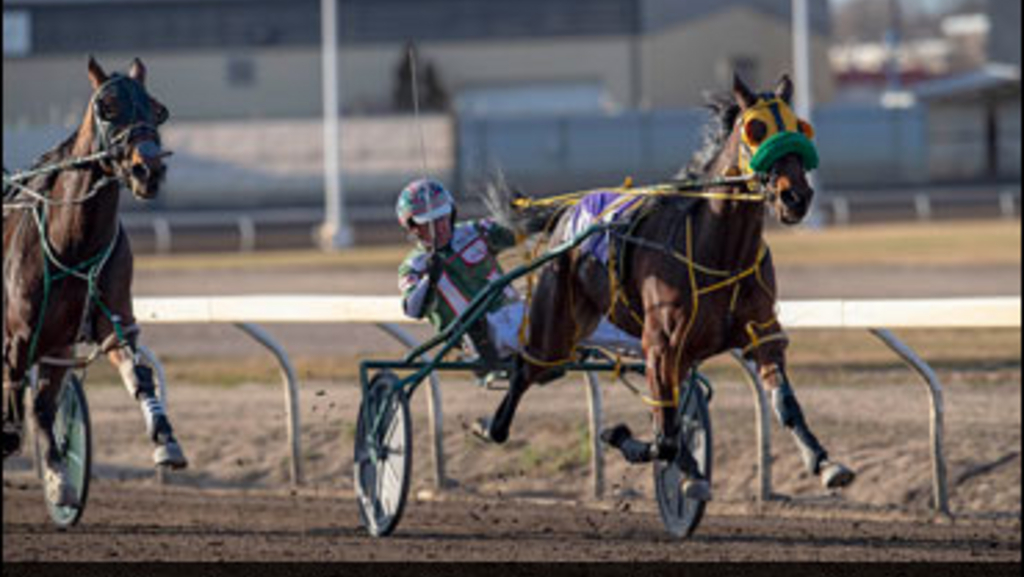 Trainer Rod Hennessy and his son Mike doubled up in the Alberta Maverick elimination round with Paradise Hill and Tap The Keg topping their sophomore rivals. 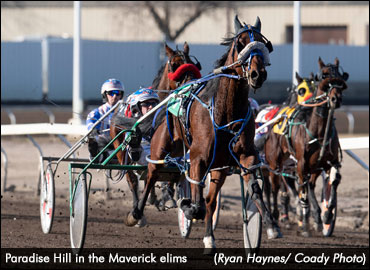 Paradise Hill was the fastest of the three Sires Stakes elimination winners, taking a new lifetime mark of 1:54.2 off a pocket trip. The favoured son of Vertical Horizon tracked outside leaver Its A Great White through panels of :27.4, :57 and 1:25.2 before out-sprinting him to the wire. Paradise Hill prevailed by 1-1/2 lengths over Its A Great White (J.F. Gagne), with Freedoms Rescue (Philip Giesbrecht) checking in third after his first-over journey.

Rod and Diane Hennessy share ownership of the homebred gelding with Edmonton's Lorne Duffield. Paradise Hill has won two of his last four starts since returning to action from a summer hiatus. He notched his sixth career win from 14 starts and bumped his bankroll to $48,191.

Tap The Keg pulled off an 11-1 surprise winning his elimination in front end fashion for Team Hennessy and Duffield. The Camystic gelding, who parked out favourite Snap Test (J.F. Gagne) early on, led the way through fractions of :27.1, :55.1 and 1:24.2. He built up a five-length lead by the top of the stretch and cruised home to score in a career-best time of 1:54.4 with Peace Out Posse (Kelly Hoerdt) chasing in second but only able to come within 1-3/4 lengths. Yankee Up (Jamie Gray) was third.

The win was Tap The Keg's second in his last two starts and fourth overall. He's banked $23,846 in 28 races lifetime.

Alberta Plainsman champion Exit Smiling returned to winning form for trainer/driver Jamie Gray, prevailing in 1:55.3 by three-quarters of a length in the other elimination. On the move from fourth after a :29.2 opening quarter, the favourite challenged Shaker Tank for the lead through middle splits of :58.3 and 1:27.2. Shaker Tank pulled two lengths clear turning for home, but the resurgent Exit Smiling eventually came out on top. Captain Terminator (Mike Hennessy) angled three-wide out of the pocket turning for home and finished second ahead of Shaker Tank.

Unraced as a two-year-old, Exit Smiling has won half of his 10 starts while earning $44,831. Gray also co-owns the Vertical Horizon gelding with fellow Albertans Fred Gillis of Airdrie, Geoff Smith of Edmonton and Calgary's Natasha Peiskar.

That elimination was one of three victories on the final Northlands harness card for Gray, who won the 11th race curtain closer aboard You Talk Too Much, a three-year-old Well Said filly owned by trainer Keith Clark and Robert Jones of Stoney Plain, Alta.

You Talk Too Much led a three-wide charge on the backside and stormed to the lead, opening up three lengths turning for home and then held off Blue Grotto (Kelly Hoerdt) by half a length in 1:54.3. Favourite Mt Sterling Mafia (J.F. Gagne) finished 10-3/4 lengths in arrears.

The $55,000 (added) Alberta Maverick, set for Sunday, Nov. 4, is the sophomore colts' third and last stakes final of the Sires Stakes season leading up to the Challenge Of Champions Super Finals, which will follow on Saturday, Nov. 17. Century Downs will now host the harness action in Alberta with the new Century Mile set to open next year.

It seems fitting that a Keith

It seems fitting that a Keith Clark trained horse won the final race at Northlands Park. I lived in Calgary from 1980 to 1984 and Clark dominated the Alberta harness racing game. He was head and shoulders above everyone else. One of the greatest if not the greatest horseman to come out of western Canada.

The end of racing at

The end of racing at Northlands comes with the rebirth of a new track facility at Century Mile, and the vision of prosperity and stability for all race participants in the future.