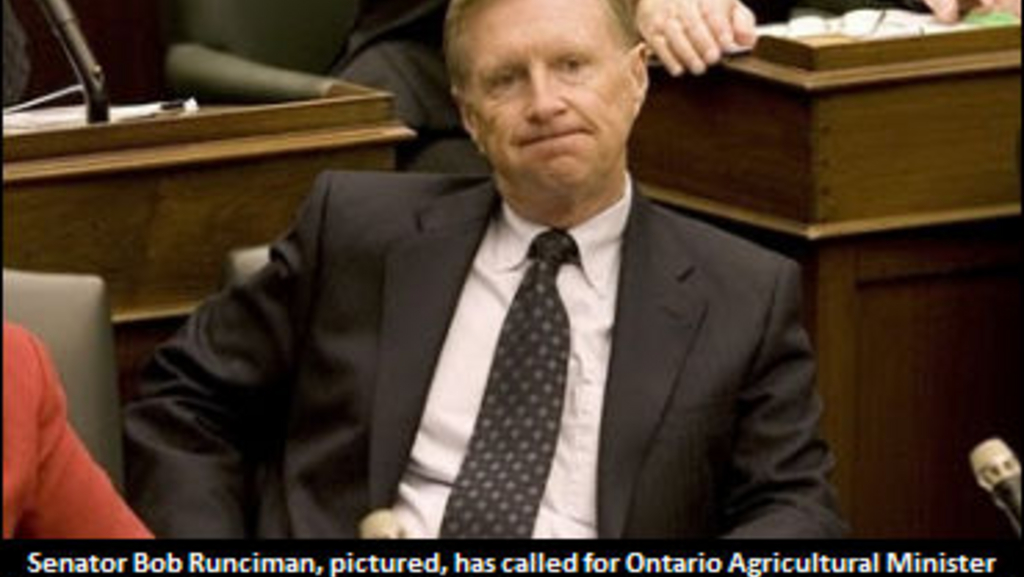 Runciman claims that McMeekin sat idly by and essentially did nothing at all while the Ontario horse-racing industry was delivered a calculated body blow by the provincial government in which he is a part of.

“A good minister, a minister who was dedicated to representing the agricultural community, would have resigned,” Runciman said.

Runciman's release appears below in its entirety.

The cancellation of the Slots at Racetracks program announced by Finance Minister Dwight Duncan on March 12 --- two days before cabinet even received a briefing paper on the move --- was “a deliberate blind-siding” of the agriculture minister, said Runciman, “and I think it says a lot about Mr. McMeekin’s standing in the government.”

Runciman made the remarks during a town hall meeting held here Friday organized by Donna Skelly, PC candidate in the riding of Ancaster-Dundas-Flamborough-Westdale --- the riding McMeekin represents in the legislature.

The cancellation of the program is expected to lead to the loss of at least 30,000 jobs and the killing of up to 13,000 horses. “Cancelling slots at racetracks will have the most devastating impact on the farming community of any government decision in recent memory,” Runciman said.

“A good minister, a minister who was dedicated to representing the agricultural community, would have resigned,” Runciman said, but McMeekin didn’t even say anything until he issued an open letter two months later. “And the open letter didn’t say anything, either.

"For Ted McMeekin, the car and driver and the extra salary mean a lot more than the interests of the rural economy,” Runciman said.

McMeekin should use the opportunity provided by the impending resignations of Finance Minister Duncan and Premier McGuinty to ask for the continuation of slots at racetracks, Runciman said. With a lame-duck premier, it’s time for McMeekin and other MPPs who know this was a bad decision to speak out, Runciman said.

“If you care about those jobs, if you care about the lives of 13,000 horses, then I urge you to call Mr. McMeekin and other Liberal MPPs and tell them to stand up for the people they were elected to represent, rather than to stand with the insiders and special interests that want to see this change,” Runciman told the crowd at the Dutch Mill restaurant.

I would like to thank Senator Bob and Donna again for their support. There is only one thing I want from Mr. McMeekin and that is the report to be made available to us now!! What are they afraid of? We have waited far too long already. Nevermind this political game! Give us your answer!

This is what Senator Bob

This is what Senator Bob Runciman can do that the rest of us can't. This article, written by him, appeared in The Toronto Sun today. Hopefully, a lot of city folk will be reading it.

More importantly the OLG had

More importantly the OLG had already decided to cancel the slots at racetrack agreement when MR. GODFREY ( who is responsible) not the government made the announcement at the March press conference ! DUNCAN and McGINTY really never understood the implicates and affect on our HORSE RACING INDUSTY..Their speeches on the budget indicated that the money saved from the OLG subsidy(their words) would go to education and health care has shown how little they cared about or understood how 55,000 working people and thousands of others connected with the horses..Two thirds of the three are gone,slipped out the back door, but one remains..the person that orchestrated the private agreements to be broken with each racetrack...Ontario will have a new government in 2013 ,the liberal party will have a new leader, the OLG will hopefully have a new chairman .In the meantime the horsemen and horsewoman including Quarterhorse Thourobred and Standardbred track management must sit down !TOGETHER! Under one umbrella ASSOCIATION and decide the future plans to continue horse racing in Ontario....United HORSERACING Association ...That's a lot of VOTES for the NDP and PROGRESSIVE CONSERVATIVE candidates ,let your candidate know the SAR is our issue in the election....Hit the newspapers WHITH your personal stories with letters to the editors and use the social media...The war of 2012 continues for our children and grandchildren..TK...

Makes me wonder how Ted

Makes me wonder how Ted McMeekin got elected in the first place. I have listened to the guy, sure did not impress me. As to doing the correct thing and reinstate the SAR program, this guy has not got the intestinal fortitude. Just thinking out loud. Bruce T. Winning.