Figureheads from the Las Vegas Sands Corp. are the most recent U.S. casino representatives to pitch their vision for a downtown Toronto casino.

Stating that his company is focusing solely on Front St.'s Metro Toronto Convention Centre and no other locations in the city, Las Vegas Sands Corp. President and COO Michael Leven explained to The Economic Club of Canada during a luncheon on Monday, January 28 that his company's proposal is for an 'integrated casino' located directly in the heart of the already heavily-congested downtown core. 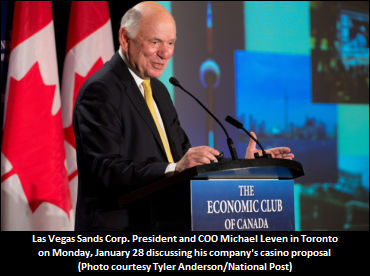 According to a report by The Globe and Mail, Leven stated that his company's proposal would include 2,000 parking spaces. The article has cited Leven as saying that many visitors to the casino would utilize public transit to arrive at the casino, and that the facility would be busiest on the weekends and during evening hours, therefore alleviating any increase in gridlock in the area.

Toronto Councillor Adam Vaughan wasted no time at all in panning Leven's assessment of the situation. In reference to Leven's assessment that 2,000 parking spaces would be enough to cater to the influx of vehicles in the core, Vaughan said that was "totally unrealistic," adding that “There is not a casino in North America that functions that way. To pretend that you can do that in the downtown core would be to cannibalize all the parking for the small businesses in the area.”

In a Toronto Star article on the situation, Vaughan was quoted as saying that the introduction of a Front St. casino with 2,000 parking spots “would turn the Gardiner Expressway into a casino parking lot.”

Another Toronto Councillor that piped up against Leven's announcement was Mike Layton, who stated that the plan was unrealistic. Layton stated that people usually take vehicles to casinos because people tend to drive when they have large quantities of cash on them. He also stated that such an undertaking would require 10,000 parking spots --- spots which would "have to come out of local stock,” which he stated “will essentially take up every single parking spot in the downtown.”

The Las Vegas Sand Corp.'s casino proposal would be coupled with the previously-proposed expansion plan for the Metro Toronto Convention Centre and adjacent area by owner Oxford Properties Group.

In November of 2012, Caesars Entertainment Corp., in partnership with Rock Gaming LLC, unveiled their proposal for casino expansion onto Oxford's proposed framework.

(With files from The Globe and Mail, the National Post and the Toronto Star)

Everyone put their hand up

Everyone put their hand up who wants to take public transportation to a casino on Front Street. How about driving into the centre of the city every day especially after a hard day's work? Who believes that tourists will flood the airports to get to Toronto as a gambling destination? What am I missing here? These promoters are seeing our province and cities in a way that one would look at Las Vegas or Atlantic City both of which are eyesores on the surface of the earth. Godfrey must have done a great con job on them to get this much attention.

The new Liberal leadership needs to quickly take control of the OLG and Paul Godfry ... as they are currently "out of control"

The Oxford Property Group apparently has the inside track on building Toronto's new Casino ... regardless of who operates it. Interestingly, their CEO Blake Hutcheson was on a blue ribbon panel (along with Larry Tannenbaum) put together by former Toronto Mayor David Miller back in 2007 to help "save" the city.

Seems like that was just about the same time that Mr Tannenbaum began promoting a downtown Casino for Toronto.