Reflecting On A Trotting Champion 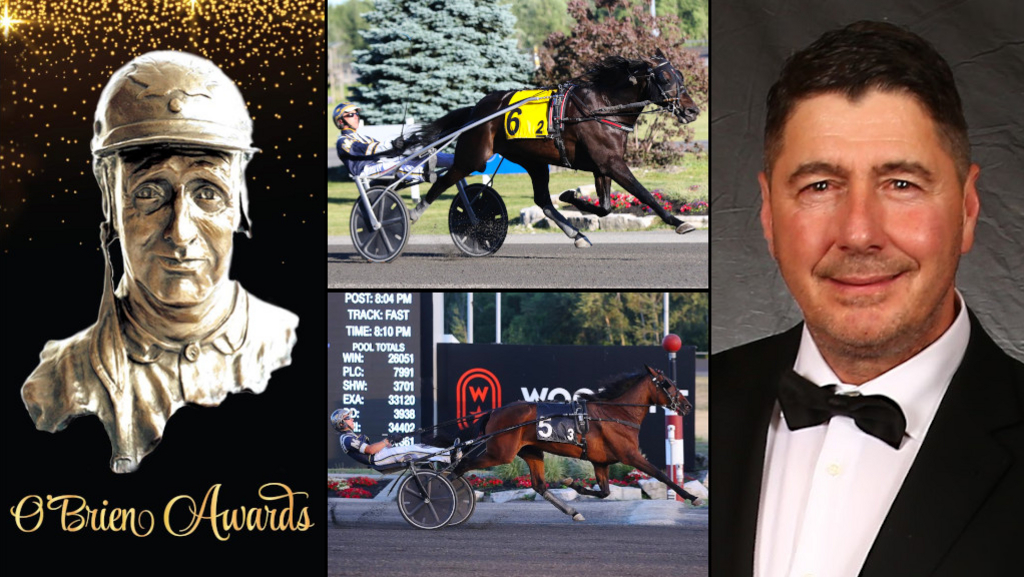 A decade after millionaire trotter Intimidate brought him to national prominence and the training job for big-budget Determination Stable, Luc Blais has become a fixture at the O'Brien Awards honouring the best in Canadian harness racing.

Blais, recipient of the 2021 O'Brien Award of Horsemanship, has seen several stable stars nominated for O'Briens over the years, including Hambletonian winner Forbidden Trade and double-millionaire trotting mare Emoticon Hanover.

For 2022,  Determination has two finalists — Forbidden Trade in the older male trotter category and Silly Me Hanover for two-year-old trotting filly.

It's the last nomination for Forbidden Trade, who has won three O'Briens already, including Canadian Horse of the Year in 2019, the year he captured the Hambletonian. The seven-year-old son of Kadabra is standing at stud this year at Deerpath Breeding & Development in Ontario.

He had four wins last year to boost his career earnings to $2.3 million, but none of the victories were in stakes races. His best effort might have been the $610,000 Maple Leaf Trot at Woodbine Mohawk Park, where he escaped from traffic late to finish a game third to Back Of The Neck and Ecurie D, just ahead of the other O'Brien nominee, Fashion Frenzie.

"He's healthy, but last year was harder for him," said Blais. "We thought it best to stop him and focus on his stud career. He's been so good for us. It's hard to replace horses like that. The races he won, the thrills he gave me...He had the perfect attitude. You could do what you want with him in a race. Horses like that bring you to their level; it's not the other way around."

Determination has two mares in foal to Forbidden Trade and also is awaiting a second foal from Emoticon Hanover, who was bred to Walner last year after producing a Muscle Hill filly in 2022.

In the meantime, Blais has a fleet of two dozen two-year-olds to prepare for the 2023 season.

"It's about twice as many as usual, but Mr. Godin [Serge, owner of Determination] wanted us to renew our stock," said Blais, who is training about 40 horses in all.

With Forbidden Trade gone from the roster, Blais will be counting on trotters like Silly Me Hanover and Tuscan Prince to step up. The stable made $1.5 million last year, almost all of it in Canada. Blais described the year as  "good," though it has topped $2 million in the past.

Silly Me Hanover, a $250,000 Walner yearling, won two of eight starts as a two-year-old, but her big moment was in the Mohawk Million, where she finished second to Oh Well at 42-1.

"She started the year well [capturing two eliminations of the Pure Ivory Series], got sick and then finished well," said Blais. "If she can improve a bit at three, I think she'll be competitive on the Grand Circuit. She showed she's capable of it last year."

Tuscan Prince was a pleasant surprise last year, topping $100,000 in earnings, though the son of Kadabra made a break in the $225,000 Ontario Sires Stakes Super Final for two-year-trotting colts.

"He started the year in Grassroots [stakes] and became a good Gold horse. He kept improving," said Blais.

Blais and the grooms of his nominated horses will be in attendance for the O'Brien ceremonies on Feb. 4.

"It's nice to see the efforts and achievements recognized," he said. "The nomination gives you a boost. It motivates you for the coming year."