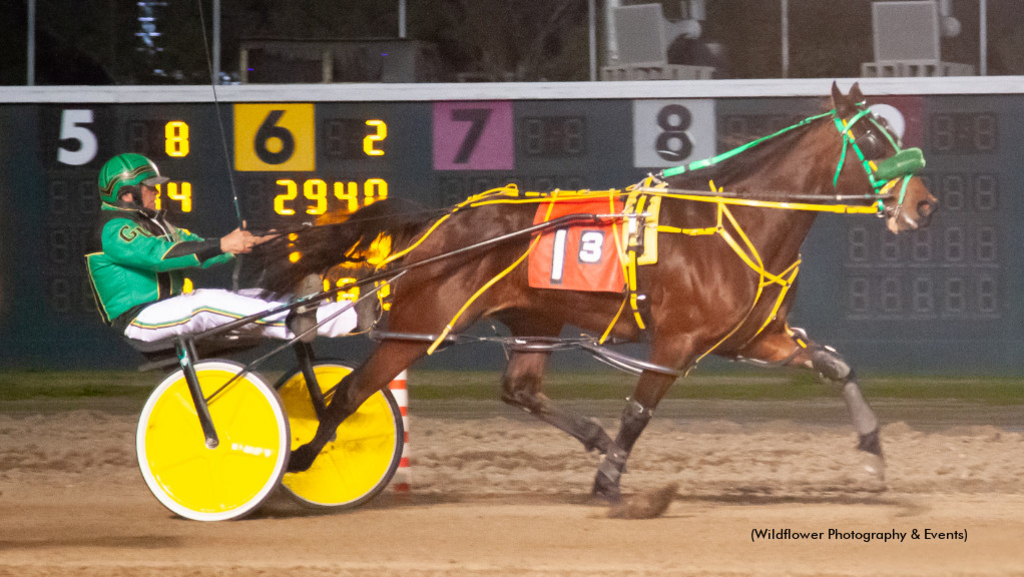 In rein to trainer-driver Gerry Longo, Divine Art tried new tactics after leading to a :28.3 first quarter. She yielded command to Marys Pretty Girl before a 1:00.2 half and sat a pocket ride while Rockin With Lou pressed forward. By three-quarters in 1:29.1, Rockin With Lou forged to the lead and clung to command as her stablemate livened off the pocket ride. Divine Art slid to the top to take a three-quarter length win in 1:57.1 over Rockin With Lou, with Marys Pretty Girl another three lengths behind in third and Blue Star Mystic another five behind in fourth.

The Western Canada pair of Brandon Campbell and Travis Ellis dominated the stakes action at Cal-Expo. The pair first nabbed a blowout win in the $15,800 Jack Williams Final with HF Flower in 1:57.2. The four-year-old Ameripan Gigolo mare set a pace of :29, :59.3 and 1:28.3 while under mid-race pressure from Snoah, whom promptly folded to the final turn as HF Flower hit another gear. She strode for home to romp by 6-1/4 lengths with Princessofthedawn inheriting second via disqualification and Salary moving to third.

Following the forceful front-stepping performance, Campbell and Ellis scored in the $30,000 Alan Horowitz Memorial from off the speed with Flying Officer. Catching second-over cover after a :27.3 first quarter, Flying Officer sat perched while Ideal One A applied a minor challenge to pacesetter Rockinscience through middle fractions of :58.1 and 1:27.4. Rockinscience remained headstrong off the bottom corner, but Flying Officer swooped off a helmet and collared the leader by a half length at the finish of a 1:56.3 mile. Villa For Rent rode a pocket trip to take third and Rockn Jimmy Brown rallied for fourth.

Tim Gordon owns Flying Officer, a seven-year-old stallion by Riverboat King. He won his 14th race from 107 starts and added to an account now worth $105,356. He paid $5 to win.

Of the 17 times that Divine Art raced last year, her only 3 defeats came when she raced from the 7-post or the 8-post.

Brandon Campbell is on Fire . He was 6/12 the night before at Century mile. Congratulations