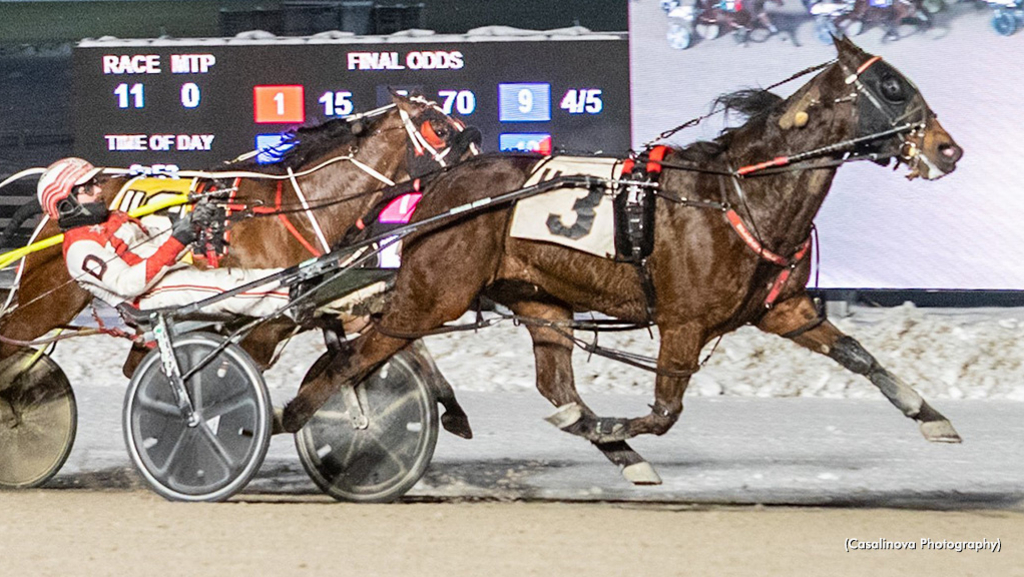 The 13-year-old surpassed Breeze On J for fourth in all-time wins with his victory on Sunday night registering his 124th victory in his 328th lifetime start.

Winless in three starts this season, Southwind Amazon looked like a version of his old self on Sunday, winning an upper-level pacing event by a length.

Driver Billy Davis Jr. made the lead through the first eighth of a mile with Southwind Amazon but set a torrid pace early getting to the quarter in :26.3.

Coming to the half, Southwind Amazon didn’t face any challengers, allowing Davis to get a :28.4 breather. Heading into the clubhouse turn the final time, 2020 Carl Milstein Memorial winner Odds On Osiris tried to make a bid at the leader. Feeling the pressure, Davis stepped on the gas, opening to a two-length lead. But heading to the three-quarter pole in 1:23, Captainofrocknroll with Odds On Osiris in tow.

Turning for home, Southwind Amazon had more left in the tank to win in 1:52.3 over Almanac, who closed to be second, while Odds On Osiris settled for third.

“He’s been an absolute blast to train for seven years now; he is like my son,” said winning trainer Paul Holzman.

In the $18,000 Open Pace on Sunday night, Bettor Than Spring returned to the winner’s circle for the first time since mid-December.

Moving up the backstretch, Davis kicked out the plugs and cruised to three-quarters in 1:23.2.  Benefitting from outer-tier horses getting stacked up by a tiring Dancin Dragon, he turned for home with a 1-1/2-length lead. Through the stretch, One Last Laugh, Bronx Seelster and Bernie all took shots at Bettor Than Spring, who had more in the tank, winning by a half-length in 1:52.1.

Southwind Amazon needs 14 more wins to surpass Niffit and become the winningest Standardbred of all time. In order to do it, he'll likely have to continue to race next year, at age 14.