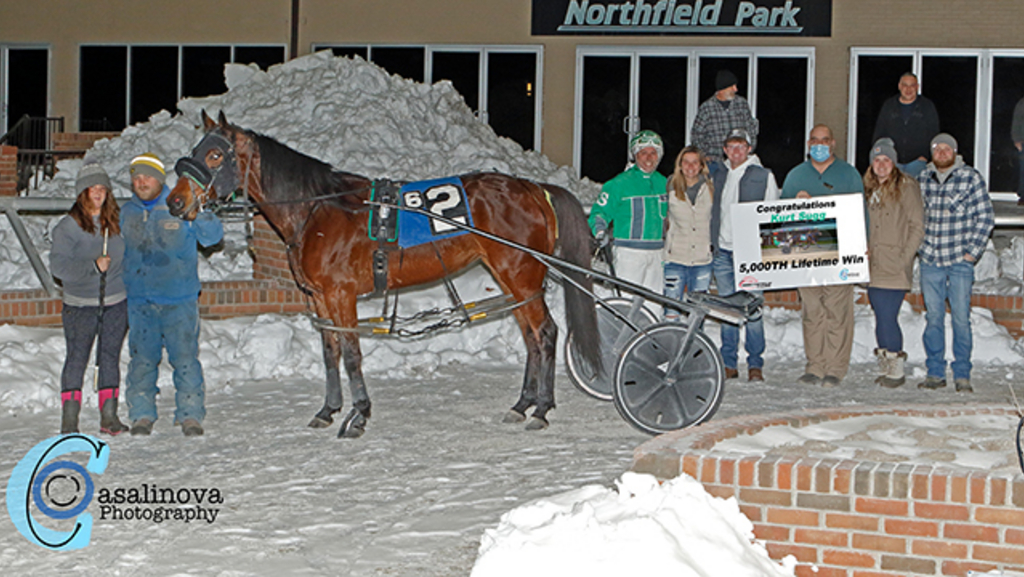 Kurt Sugg made his 5,000th trip to the winner’s circle after winning with Blue Speech in Northfield Park’s sixth race on Saturday (Jan. 22).

Sugg sat the pocket with Blue Speech, eventually rolling home in the passing lane and besting her competition by a half length. The 1:57.1 clocking was the eighth win for the five-year-old pacer, who returned $8.80 to win.

Sugg is a third-generation horsemen and grew up immersed in harness racing.
“I was nine when I jogged my first horse,” said Sugg. “I’ve been around horses all of my life and there was never a question what my career choice was going to be.”

After graduating from Patrick Henry High School in Hamler, Ohio, Kurt Sugg began working with horses full-time. His father Ivan had an established stable and had placed the Sugg name in harness racing prominence with horses such as No Pan Intended and Glad Rags (a mare that beat Meadow Skipper) and was inducted into the Ohio Harness Racing Hall of Fame in 2006.

His richest win was a $225,000 Ohio Sire Stakes Final series final in 2015 at Scioto Downs aboard Count On Kami. His fasted happened last year, a 1:50 win aboard Bernie. He rates the best horses he has ever driven as World Champions Dunkster and Blastaway Sahbra.

Sugg resides in Polk, Ohio, with his wife, Becky, and competes regularly at the Flying Turns and on the Ohio stakes scene. Becky is an elementary school secretary at Northwestern Elementary. When not racing, the Suggs love to travel and frequent Disney multiple times a year.

Kurt loves the competition of racing and thoroughly enjoys working with horses. Commenting on his successful career, Sugg said, “I’ve never had a job.”