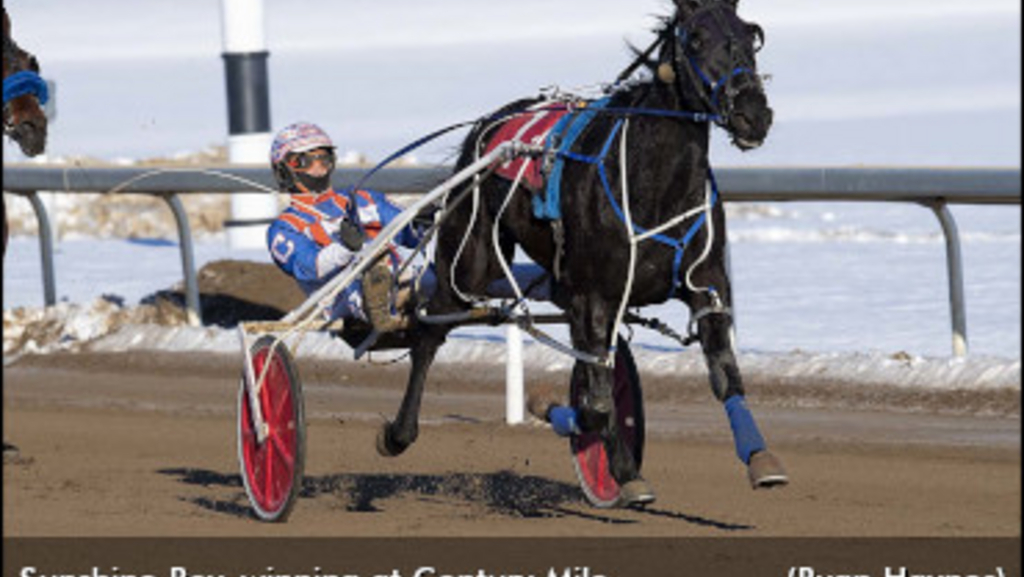 Making his first start since laying the smackdown on foes his own age in the Western Canada Pacing Derby, Sunshine Boy made a seamless transition to open competition for his connections in the Saturday (Jan. 15) feature at Century Mile.

With trainer Brandon Campbell at the controls, Sunshine Boy was settled away midpack in third against his five rivals as Crackle N Burn (Phil Giesbrecht) and Canadian Pharoh (Dave Kelly) showed early speed to place forwardly off the gate. Canadian Pharoh hit the opening turn on top and tripped the first timer in :26.4.

The tempo slowed down the backstretch, and Campbell sat patiently in third as long as he could with the 3-5 choice. As second choice Outlaw Gunsablazin (Jamie Gray) started a first-over grind approaching the half, Campbell knew his time had come to right-line and forge first up. Sunshine Boy was a half-length back of Canadian Pharoh through a :55.4 half, but kept the pedal to the metal heading into the far turn and opened up three lengths on his rivals when the third station was reached in a brisk 1:23.4.

That three-length lead widened to four by the head of the lane, and Campbell kept Sunshine Boy on task through that final panel to hit the wire two lengths in front of Crackle N Burn. The mile time was 1:54.1.

The sixth straight score for Sunshine Boy (Sunshine Beach - Betterfronbehind) marked his the 10th lifetime tally. The winner's share of the purse pushes his career bankroll over $131,000 for Alberta-based owners Jodi Loftus of Calgary, Dana Shore of St Albert and George Rogers of Calgary.

Driver Phil Giesbrecht enjoyed an eventful afternoon with five visits to the winner's circle on the 12-race card, three of which came from the Chris Lancaster stable. He opened the day with a victory by Blue Star Mystic ($9) before later scoring wins with Lancaster trainees Pure Addition ($3) Nevada Vacation ($6.60) and Portrstownchris Ir ($3.40). In between those winners, Giesbrecht got another photo taken when winning with odds-on favourite Chaseisonthecase ($3.60).