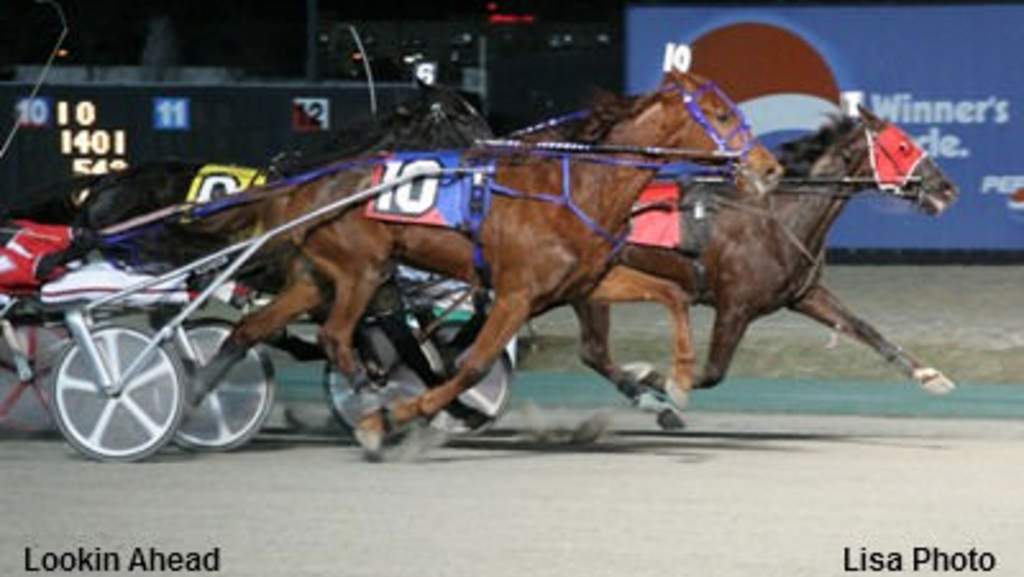 The duo swept the first two $12,500 Super Bowl divisions for trotters on the card with Supreme Victor and Lookin Ahead. Supreme Victor sat third the whole way and shook loose late to stop the pacesetter Counsel (David Miller) by a half-length in 1:58.3. The Big Bam (Eric Goodell) finished third off a garden trip. Supreme Victor paid $6.20 to win the opener. The four-year-old Valley Victor gelding has now won six of 22 career starts for Wilfong.

In the second division, Lookin Ahead cleared the lead on the final turn and held off My Back Pages (George Brennan) for a nose victory in 1:57. Proud Moment (David Miller) was third. Lookin Ahead paid $2.40 as he posted his second straight Super Bowl win. The lightly raced son of Armbro Tunnel improved his record to five wins and one second in seven career starts.

Diamond Hunter, driven by Eric Goodell, narrowly held on for his second Super Bowl score in the third race division, while Smartchip closed from the far outside to take the fourth race for Cat Manzi. Tropicana Ron romped to an impressive four and a half length win in the final division with George Brennan in the bike. His 1:55.1 clocking was the fastest of the five Super Bowl winners.

A trio of hefty long shots late in the Meadowlands' Wednesday card produced a $32,239 Pick 4 carryover heading into Thursday night.

Offered nightly on races six through nine, the Pick 4 features a low 15 percent takeout and nightly guaranteed pools [$25,000 Wednesday - Friday and $50,000 Saturday]. Driver Andy Miller looks to be a pivotal factor in the Thursday night Pick 4 with morning line favorites in the second and fourth legs. He will drive Thong Song for his brother, Erv, in race seven, a division of the White Ruffles Series. In the ninth race, he will sit behind Enemy At The Gate for his wife, Julie. Post time is 7 p.m. on Thursday.

The Pick 6 wager also produced a carryover of $10,873 heading into the Thursday night card. The Pick 6 covers races four through nine and is a $1 base wager. The record Pick 6 payoff at the Meadowlands came in February 2007, when one winner took down the entire pool of $131,071 after a $58,000 carryover heading into the night.