Hickfromfrenchlick drew post position No. 6 in the two-year-old pacing colt and gelding event during Yonkers Raceway’s $1.8 million New York Night of Champions. The race, sponsored by the state’s Agriculture and Horse Breeding Development Fund, is the fourth of a dozen-race card and the third of eight consecutively-contested $225,000 sire stakes finales. 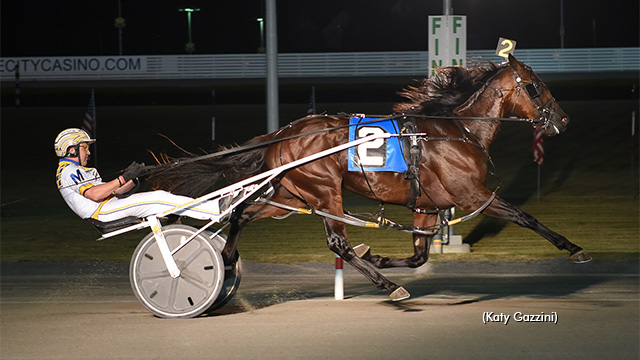 Hickfromfrenchlick is no stranger to the spotlight, having won the $100,000 Lawrence B. Sheppard Pace here in mid-July (1:55.4). The son of So Surreal returned to Westchester in late August, picking off divisional leader — and Saturday’s pole-sitter — Melodies Major in a New York Sire Stakes event (1:53.3).

“Stuck behind some bad horses who had no reason to pull,” Ray Schnittker said.

Fortunately for Hickfromfrenchlick’s co-owner/trainer and sometime chauffeur, those sort of nights have been few and far between. Schnittker drove that night (as he did at Vernon), but is listed at The Meadows Saturday, so he enlists Tim Tetrick this time around.

“Training down, he was good, so I’m not surprised,” Schnittker said of the $47,000 (Goshen, NY) lad who’s also co-owned by Nolamaura Racing and Thomas Spatorico. “He had a :27 and change last quarter (in a Landmark event) at Goshen, so I knew he was ready.

My Girls A Star was a solid New York Sire Stakes lass, winning 7-of-11 and more than $139,000 as a 2010 freshman despite having the misfortune of being in the same age group as Dan Patch Award winner See You At Peelers.

“I told Mark (MacDonald) he was going to win the Sheppard, so just don’t screw it up, which he didn’t.”

Any such guarantees for Tetrick before he and Hickfromfrenchlick Saturday night?

“No one can outleave Melodies Major if they wanted to, but I think (Hickfromfrenchlick) can get around some of the others, and if he’s close, he wouldn’t stun me.”

Regardless of Saturday’s outcome, Hickfromfrenchlick is finished for the season.

Post time for the New York Night of Champions fun and frolic is the usual 6:50 p.m.

(with files from Yonkers)