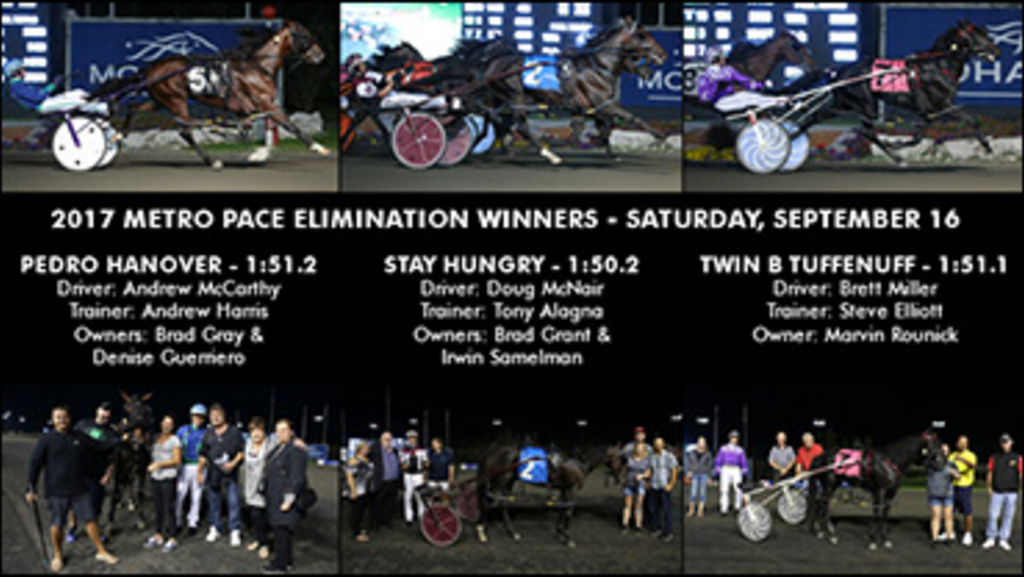 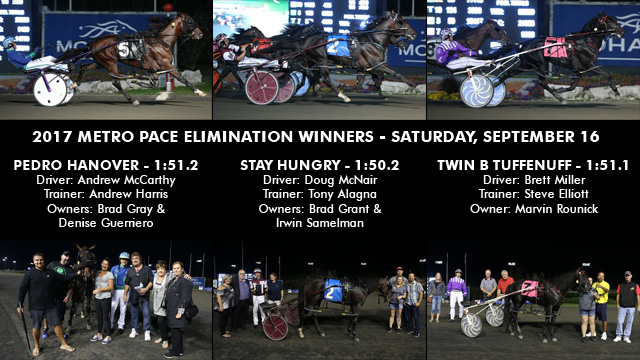 The Shes A Great Lady for pacing fillies did not require eliminations last week and will see a field of eight competing for half a million dollars.

A 12-race card has been put together for Saturday and total purses for the evening exceed $1.5 million. The Metro Pace has been carded as Race 9, while the Shes A Great Lady goes as Race 6.

The Metro Pace, which was first raced in 1988, is annually the biggest race for two-year-old pacers and has an impressive list of past champions, including legends Artsplace, Presidential Ball, Rocknroll Hanover and Somebeachsomewhere.

Trainer Tony Alagna, who won the Metro in 2013 with Captaintreacherous, sends out a pair of starters, including the undefeated Stay Hungry.

A son of 2007 winner Somebeachsomewhere, Stay Hungry won arguably the toughest of last Saturday’s three eliminations by edging out Lost In Time and Hayden Hanover by a neck in 1:50.2, which established a new season’s mark for a two-year-old pacer.

Stay Hungry is three for three to start his career for owners Brad Grant, who is Mohawk’s leading owner, and Irwin Samelman. His two other victories came in a $14,000 conditioned race and a $97,880 division of the Champlain. The bay colt was a $150,000 purchase at last year’s Lexington Selected Yearling Sale.

Doug McNair will be seeking his first Metro title and will guide Stay Hungry from post position two.

"This is kind of where you aim for to start a season," McNair said following Stay Hungry’s elimination victory. "He's coming into the Metro final in good shape -- dropped two more seconds off his previous mark and he did it pretty handily. He felt pretty good [while] they were battling up front. He's green once he clears - he hesitates a bit, but he's real smart; he knows what he's doing."

Pennsylvania Sire Stakes champion Pedro Hanover is arguably the hottest horse coming into the Metro Pace. The Andrew Harris trainee is on a four-race win streak with all four victories coming in stakes events.

Also a son of Somebeachsomewhere, Pedro Hanover paced a final-quarter of :26.2 to secure a 1:51.2 victory in his elimination. Driver Andrew McCarthy first sat behind the bay colt in winning a $112,525 division of the Nassagaweya on August 26 and has since guided the rookie to two more victories.

"I got very lucky [when] Tim Tetrick couldn't make it up here for the Nassagaweya, and he mentioned my name, so I got to come up and race him up here," McCarthy said after Pedro Hanover’s elimination score. "They went [fast] enough in the first quarter, so I knew that'd take a bit of the sting out of them. As long as I was handy enough at the head of the stretch, I know he's going to kick home in 26-and-change; he can really fly."

Pedro Hanover was an $80,000 yearling purchase last November at Harrisburg and is owned by locals Brad Gray of Dundas, Ontario and Denise Guerriero of Toronto, Ontario.

Pedro Hanover is five for seven with $260,656 earned. He’ll start from post-four.

Twin B Tuffenuff was the surprise winner of last Saturday’s three eliminations. The Steve Elliott trainee and driver Brett Miller came through with a 7-1 upset to break his maiden in 1:51.1.

A son of Rock N Roll Heaven, Twin B Tuffenuff hadn’t been finding the wire first prior to Saturday, but was showing tremendous speed on the end of his miles.

"This is a very nice colt," Miller said after the elimination score. "As you can see on his lines, at the quarter, at the half, he's been 15 lengths off -- 15 lengths off at the half and pacing unreal back halves. He has troubles steering, so I knew, if I could ever get him close from the half on, he'd be tough to beat.”

Owned by Marvin Rounick, Twin B Tuffenuff was a $75,000 yearling purchase at Harrisburg and is one for eight with $35,830 earned. He leaves from post three on Saturday.

The $500,000 Shes A Great Lady promises to be an exciting showdown, as eight pacing fillies will square off.

Come See The Show will be looking to make her momma proud starting from post-four with driver Tim Tetrick. The daughter of Somebeachsomewhere is the second foal out of 2009 Shes A Great Lady winner Put On A Show.

Trained by Linda Toscano, Come See The Show has two wins and two runner-up finishes in five starts for earnings of $72,498. The bay filly was purchased for $550,000 at last October’s Lexington Selected Yearling Sale by co-breeders Joanne Young and Richard Young.

The talent runs deep in the Shes A Great Lady, as local standouts Kendall Seelster and Percy Bluechip are set to lock horns once again.

Trained by Paul Reid, Kendall Seelster is riding a two-race win streak into Saturday, which includes a 1:51.1 score in the $169,381 Champlain Stakes on September 2. The daughter of Shadow Play has posted three wins and four runner-up finishes in eight starts.

Randy Waples, who won the Shes A Great Lady in 2015 with L A Delight, will guide Kendall Seelster from the rail.

Dr. Ian Moore trainee Percy Bluechip generated a ton of buzz with her debut performance and is coming into Saturday’s race with four wins in five starts. Her only loss was a runner-up finish to Kendall Seelster in the Champlain.

The field of pacing fillies also includes New York Sires Stakes standout Youaremycandygirl for trainer Ron Burke. The daughter of American Ideal is three for five with $81,545 banked. She will start from post-eight with Yannick Gingras listed to drive.

Fans are reminded that Mohawk will be hosting a New Owner Seminar prior to Saturday’s races. The seminar will offer fans the opportunity to learn about affordable and easy options for becoming involved in racehorse ownership.

The seminar will begin at 6:00 p.m. in the Director’s Lounge. Signage will be posted at the Grandstand entrance to guide those wishing to attend.

Prospective owners who attend Mohawk’s New Owners Seminar will have the opportunity to enter the "Win A Share in A Racehorse" contest in conjunction with the London Selected Yearling Sale and the Ontario Sires Stakes.

To view the entries for Saturday's card, click one of the following links: