This Sunday (Sept. 12) Hippodrome 3R hosts the finals of both the Breeders Trophy Series (for three-year-olds) and Future Stars Series (for two-year-olds). With total purses more than $450,000, it is the richest day of harness racing in all of Quebec.

Here is a synopsis of the eight finals listed in race order.

HP Felicity (Post 7) has just two starts in the series, winning both of them. The Muscle Mass daughter has earned nearly $50,000 this year for trainer Jean Tourigny and owner-breeders Claude Hamel & Michel Damphousse. She will be driven by Sylvain Filion.

Sunjet Ray (Post 5) is the early favourite for driver Louis-Philippe Roy. The Sunshine Beach filly was placed first in the series final leg, sporting a record of 2:00.3 with Roy in the sulky for trainer Francis Richard. She is co-owned by Richard with Guillaume Desrochers, Dr. John Bradbury and Charles Marquis.

The strong entry of Emotions Riches (Post 2) and Ciel Bleu (Post 1) will be tested once again. Emotions Riches (Stephane Gendron) is coming off a lifetime best 1:59.2 triumph in the series for trainer Maxime Velaye and the gelded son of Wheeling N Dealin is seeking his third straight win for the Provoquante Stable that bred and owns both colts.

Hall Win (Post 5) was the early season sensation for the Kevin Maguire Stable, sporting five wins in nine starts already this year and will have Louis-Philippe Roy in the sulky for the first time. Other contenders include Aoki (Post 6) for driver Jocelyn Gendron and Deal With Lucus (Post 3) with driver Stephane Brosseau. 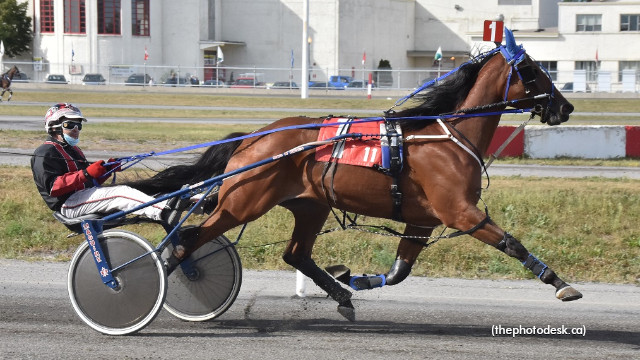 The main competition comes from a pair of colts from the Daniel Martin stable: Kenogami Rebel (Post 4) for driver Stephane Brosseau and Sammy Justice (Post 1) for driver Pascal Berube.

This is a classic match-up between Kaporal (Post 8) for driver Stephane Gendron against HP Momentum (Post 6) for driver Sylvain Filion. Kaporal, a gelded son of Sunshine Beach, has won his last two starts — both in the series — the fastest a 1:58.3 lifetime mark where he just beat HP Momentum. He is trained by Francis Richard for the Richard Stable, Ferme Auclairs and Jean-Christophe Auclair.

X O X O (Post 5, pictured below) has been a perfect three-for-three in the series for owner, breeder and driver Jerome Lombart. This daughter of Angus Hall sports seven wins this year, tying her with Platine Alpha as the two winningest horses at 3R this season. She took her record in the series with a 2:00 triumph two starts back. 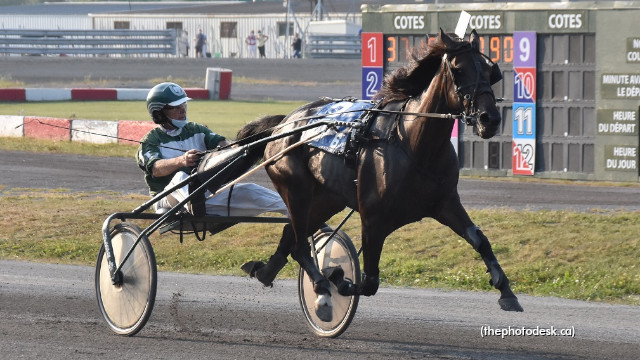 Mag N Lady (Post 3) was last year’s champion and holds the track record for two-year-old trotting fillies. She is winless in four starts this year but driver Samuel Fillion will be looking to break that winless skid on Sunday. Elegance Duharas (Post 1) is another contender, coming off a lifetime best 2:00.3 qualifying win at Mohawk and will be driven by Louis-Philippe Roy.

This will be a tough race as the morning line favourite, Celia Bayama starts from the far outside Post 8 for driver Sylvain Filion. The Bettors Delight filly has the speed to overcome the outside position, winning last start in 1:57.2. Celia Bayama was the Quebec-Bred champion at age two last year.

Got Sexy Scars goes from post four for driver Louis-Philippe Roy and ships back to 3R off back-to-back wins in 1:53.2 in Ontario. Other contenders include CL Sportsextreme (Post 5) for Jonathan Lachance and Platine Alpha (Post 3) with Pascal Berube in the bike.

The Light Speed (Post 6) ships back to 3R for trainer-driver Guy Gagnon and sports an impressive eight wins this year, the fastest a 1:52.1 score. The 2020 two-year-old Quebec Champion YS Do It Right (Post 1) and Chantee (Post 3) are also contenders.

Post time on Sunday is 12:10 pm. A free race program is available at hippodrome3r.ca. To view the entries for Sunday's stakes-packed card of harness racing, click one of the following links: Entries || Program Pages (courtesy TrackIT)