The final preliminary round of the Future Stars Series for two-year-olds takes place Sunday afternoon (August 29) at Hippodrome 3R with two $8,000 divisions for the pacing colts and fillies.

Returning to 3R for Sunday’s program is three-time O’Brien Award winner Louis-Philippe Roy, who drives in eight of the 10 races on the program. He has also returned to drive his own colt, Aladdin Du Lau, who goes in the second race.

The pacing colts are first on the track in the second race on Sunday. Woodbine Mohawk Park invader HP Momentum (Post 6) could be the horse to beat, having raced his last two starts in Ontario. He may have finished fourth and fifth but was timed in 1:53.4 and 1:54. The son of Control The Moment will be driven by Jocelyn Gendron for trainer Jean Tourigny.

Other likely contenders include Ritchie Alpha (Post 5), who sports three wins and is coming off a lifetime best 2:01.4 triumph, Persistant Boy (Post 7), who is on a two-race win streak and won a Future Stars prelim in 1:59.4, and Kaporal (Post 4, pictured below), who won his last start in the series in 1:59.1. 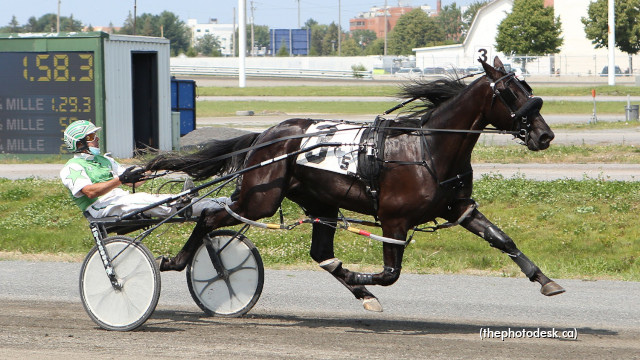 The fillies will duke it out in the fourth race where Sunjet Ray (Post 5) heads the field with Louis-Philippe Roy in the sulky. Although winless in two starts, the Sunshine Beach daughter was second in 1:58.3 in her last start. She hails from the Francis Richard barn.

She will be facing Streakayococo (Post 2) for driver Samuel Fillion and they are coming off a 2:00.2 triumph in the series. The Artspeak filly is trained by Dany Fontaine.