The EBC stakes are sponsored by a grant from the Agriculture & NYS Horse Breeding Development Fund, New York Stallion owners and Tioga Downs.

Test Of Faith (Dave Miller) headlines the $214,000 filly division, race eight on the program. The daughter of Art Major is right at the top of her seasonal class with wins in all of her New York engagements, tasting defeat only when she tried Grand Circuit types across the Hudson, losing by the slimmest of margins in a stout 1:49. 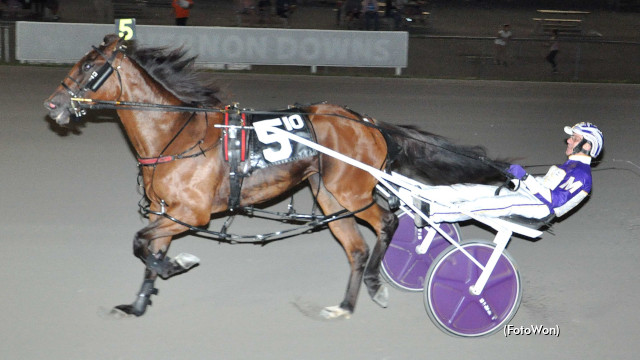 Test Of Faith will find no opponent she hasn't handled previously among the competition on Sunday as she looks to add another cool hundred thousand to her already bulging bankroll for owners Mel Segal, Kentuckiana Racing Stable and Eddie Gran. Brett Pelling is the trainer.

Race five fields an evenly matched group of five. Perhaps Natameri (Matt Kakaley) is currently the sharpest of the five with wins in his last two against NYSS competition, the lastest in 1:50 at Vernon Downs, a personal best for the American Ideal colt. He's won four of his nine seasonal starts and fared well against Grand Circuit types in the Adios. Jessica Okusko trains Natameri for Wanda Polisseni's Purple Haze Stable.

American Courage is an easily identifible favourite in division two, race seven on the card. The winner of the Messenger Stakes in early July against Grand Circuit company, American Courage has handled any state-bred competition thrown his way to this point and there's no reason to think that won't continue on Sunday. Travis Alexander trains the homebred son of American Ideal for Fiddler's Creek Stable, comprised of his wife Alaina and Mark and Leslie Wasserman. Matt Kakaley is the regular driver and might be in for a really big day.