Grand River Raceway’s Industry Day Celebration is just around the corner, and the event esteems to be one of the best days of the summer for harness racing fans. The richest card in the track’s history will be complimented by a special Hall of Fame reunion and a unique bobblehead promotion.

An 11-race card boasting nearly $700,000 in purses headlines the 22nd annual celebration of the harness racing industry. The main feature of the day is Grand River Raceway’s signature dash, the Battle Of Waterloo. The race turns 15 this year and 158 Ontario-sired two-year-old pacing colts remain eligible for the $300,000 dash.

The fourth annual Battle Of The Belles will be contested for $150,000 and 167 Ontario-sired two-year-old pacing fillies remain eligible.

An Ontario Sires Stakes $130,000 Gold Final for two-year-old trotting colts will also be featured on the rich card.

Elimination races for all three of these stake events will be contested on Monday, July 30 (post time 7:05 p.m.). The top 9 finishers will advance to their respective finals on Industry Day.

As always, Industry Day offers many other harness racing delights. 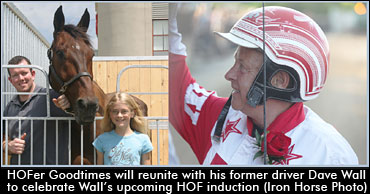 Canadian trotting superstar Goodtimes and driver Dave Wall will reunite for the first time in nearly a decade. The reunion celebrates Wall’s forthcoming induction into the Canadian Horse Racing Hall Of Fame (on August 16). Goodtimes was inducted in 2004. Wall drove the world champion more than 100 times in his illustrious career. When the John Bax trainee retired in 2003, he was the richest Canadian-bred trotter in history with 50 victories and career earnings of $2.2 million.

Wall and Goodtimes will lead the post parades for races two and three on Industry Day. As a testament to the Standardbred’s gentle nature and versatility, Wall will steer from the racebike for race two, and from the saddle for race three.

Fans are then invited to meet Wall, Bax and Goodtimes during a photo opportunity from 2:30 p.m. to 3:30 p.m.. Photos will be shot compliments of Grand River Raceway and the Canadian Horse Racing Hall Of Fame. Standardbred Canada’s I Love Canadian Harness Racing Fan Club will also be on-hand with the Wheel Of Fame, awarding Fan Club merchandise.

Collectable Jody Jamieson Bobbleheads will be awarded to 200 lucky patrons to commemorate the 15th anniversary of the Battle Of Waterloo. Jamieson is a three-time winning driver of the race, including the first edition to be raced at Grand River Raceway in 2004. (The race was contested at Grand River Raceway’s now defunct predecessor, Elmira Raceway, from 1998 – 2003.)

The afternoon includes a complete roster of side attractions, including: