If the first part of the 2018 racing season has shown us anything it’s that Ramblinglily just will not quit, but she will face her biggest test to date Sunday afternoon at Red Shores Summerside. 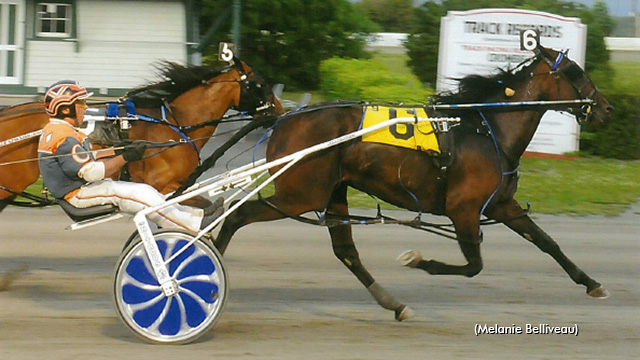 First race post time is 1:00 P.M. for the 13-dash program featuring the first leg of the Atlantic Aged Mares Pacing series presented by Standardbred Canada. Ramblinglily is shouldered with post 8 in a $3,870 division in race 11 with Gary Chappell back in the bike for co-owner and trainer Allan Jones of Riverview, N.B., and co-owner Norman Leger of Shediac, N.B. The daughter of Articulator has been perfect so far this season but has a fresh face to contend with Sunday afternoon. Sodwana Bay ships in from the Ontario circuit to draw post 2 in her East Coast debut for trainer-driver Gilles Barrieau and owner Wayne MacRae of Fall River, N.S., and Howmac Farms Ltd., of North Wiltshire. The No Pan Intended Mare has a trio of second-place finishes in her last three outings and is installed at 7-2 morning line odds Sunday afternoon. Other top entries include Prettyndangerous (Adam Merner) and Drivingthedragon N (Jason Hughes).

The other $3,870 Atlantic Aged Pacing Mares division is in race 9 with Shadows Mystery the morning line choice from post 5 with Gilles Barrieau picking up the catch drive for owner-trainer Gordie Ford. West River Ambyr has been very consistent so far this season with six straight top-two finishes. She leaves from post 8 this week for driver Steven Shepherd. Woodmere Finesse is installed as third choice fresh off a 1:57.2 victory at Truro Raceway in Nova Scotia for trainer-driver Bernard McCallum.

The card also features the kick off of $100,000 Dash For Cash where you spend $10 or more on a single wager and receive a ballot for a chance at the grand prize. Two lucky patrons will be picked each night and asked to select the complete order of finish of a eight horse race late in the program. Patrons have until race 9 to get their ballots.