The Ontario Racing (OR) Board of Directors today (Tuesday, May 8) announced the signing of a historic 19-year funding agreement with the Ontario Government.

The Ontario Government announced last month that it would allot up to $105 million annually to horse racing industry stakeholders over a 19-year period. The funding will be used to sustain horse breeding and racing, including purse management, operational expenses and capital improvements.

Horsepeople associations and racetracks, which represent 94 per cent of the race dates and 99 per cent of the wagering in Ontario, across all three horse racing sectors (Thoroughbred, Standardbred and Quarter Horse) have signed the agreement.

“This is an historic day for horse racing in the province,” said Bill O’Donnell, president of the Central Ontario Standardbred Association (COSA). “This government clearly remains committed to ensuring the long-term sustainability of the Ontario horse racing industry and the rural communities that depend on it. This new, collaborative agreement will help provide horsepeople, owners, breeders and racetrack operators with the support needed to ensure stability and long-term success.”

“This agreement signals a new era in horse racing in the province,” said Hugh Mitchell, president of the Western Fair District. “It significantly advances the Ontario Racing mandate to have the industry become self-determining as it tries to create and sustain a vibrant horse racing business while fostering a trusted and credible partnership with government and other stakeholders across the province.”

The signing of the agreement is a key milestone for the restructured OR organization. As announced in December, OR merged with the Standardbred Alliance, a centralized coalition of prominent harness racing tracks throughout the province. A new independent OR entity has been formed as a result of the merger, which has support from key industry stakeholders and includes board seats representing five horsepeoples groups and five racetrack operator groups. 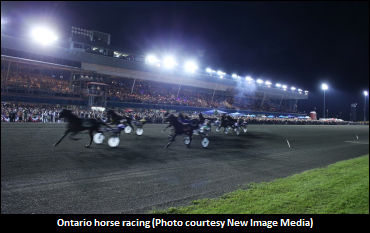 “We are exceptionally pleased to be included in this inclusive and historic funding agreement,” said Jim Thibert, CEO, Fort Erie Live Racing Consortium. “We are confident that these resources will greatly benefit our racing operations for decades to come. Also, we look forward to working with the new Ontario Racing organization to further promote our exciting sport to new and long-time facing fans alike.”

As part of the agreement, additional funding of up to $13 million per annum has been made available to all non-Woodbine Entertainment Ontario Racing member tracks in the province.

Woodbine Entertainment has created an entity called Ontario Racing Management Inc. (ORM). ORM will execute the OR Board of Directors approved business plan including day-to-day organizational responsibilities such as purse management, stakeholder relations and industry advocacy.

“As a leader of the horse racing industry in Ontario and a stakeholder in the sport in the province for nearly 140 years, Woodbine has always had the best interests of the industry in mind,” said Katherine Curry, ORM executive director. “Under the ORM banner, Woodbine is committing substantial resources, racing expertise and effective management in support of a model in which the industry itself will determine the best path forward.”

“The long-term funding agreement provides Ontario's horseracing sector with a strong and stable base," said Walter Parkinson, SBOA president. “This funding will allow Ontario's Standardbred breeding and racing industry the ability to remain a leading jurisdiction in North America. I am very optimistic about the future of horse racing and breeding in Ontario.”

“We regard the Long-Term Funding Agreement as a starting point, not an end point, to finally begin stabilizing the future of our industry,” said Sue Leslie, HBPA president. "Challenges remain, but we now have something to build on. The commitment to create new revenue streams and growth through new products continues.”

“The long-term funding by the government of Ontario will provide a stable foundation for our industry to regroup and begin looking to the future,” said Bob Broadstock, QROOI president. “Ontario Racing can now focus on providing an environment where all three breeds can grow wagering and develop new revenue streams.”

Funding under the agreement will commence April 1, 2019.