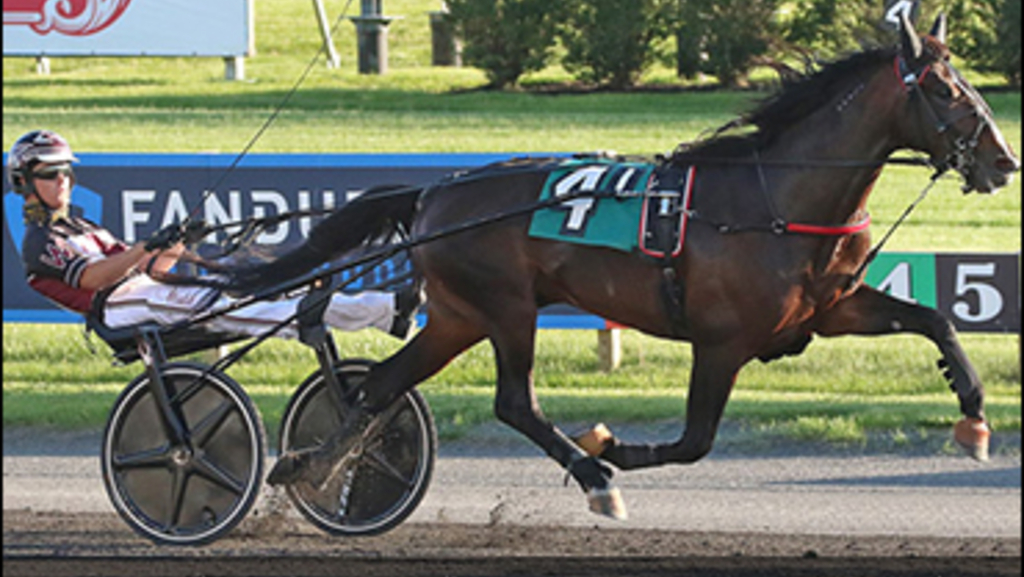 After an offseason of adjustments, Cuatro De Julio put his best foot forward in his seasonal debut last week, winning a division of the New Jersey Sire Stakes for three-year-old male trotters at The Meadowlands. His connections hope for a repeat performance in Friday’s (May 21) second round of the series at The Big M.

Cuatro De Julio won nine of 14 races last year, when his best time of 1:51.3 ranked second to only Southwind Tyrion’s world-record 1:51.1 among all two-year-old trotters. The mercurial colt finished second once and went off stride in his remaining four losses.

During this past winter, trainer Marie Ortolan Bar’s goal was to stabilize Cuatro De Julio’s racetrack temperament. First, she bought a pacer named Shoot Me Straight to jog and train with Cuatro De Julio. The trotter, who was accustomed to working alone, slowly adjusted to having a companion.

“In the beginning, he would not stay next to him. Impossible,” Ortolan Bar said. “It took one month for (Cuatro De Julio) to accept him. But now he doesn’t want to go on the track without his friend. He learned to be with another one.”

In addition, Ortolan Bar experimented with different bits and bridles. After watching Cuatro De Julio qualify at Miami Valley Raceway in 1:54.1 and win by 23 lengths on April 14, she decided to have the horse race with an open bridle for the first time in last week’s NJSS.

“It was important to fix the problem,” said Ortolan Bar, who has had a special relationship with the homebred colt from his earliest days. “We have to control him. After the qualifier, I had to find some solution. I found it, but it took time. He does not like a lot. The more you try to control him, the more he fights with you. You have to find a way to put something comfortable on him and be relaxed.

“Sometimes, he can be so adorable, but when he gets mad, he wants to control everything. They say he is crazy. I say no. He is crazy talented. You have to just understand him. Is he special? Yes. Is he difficult? Yes. But we will try to find a solution.”

Cuatro De Julio is 6-5 on the morning line in the second of two $25,000 New Jersey Sire Stakes divisions on Friday. The colt will start from post seven in a field of eight with Lucas Wallin in the sulky. Wallin last week was a late sub for driver Louis Baudron, who was unable to travel from France.

Ortolan Bar selected Wallin for the assignment because she thought he would be a good fit with her horse. The 28-year-old Wallin was a successful driver in Europe and the U.S. before spending recent years focused on his own training stable.

“He has talent and there is no stress in him,” Ortolan Bar said. “With this horse, he is a perfect match because he is quiet. I know a catch driver is important. They do it every day. They are good. But Lucas, he did not forget how to be a good driver. So, why not? He goes very well with my horse. And I love to share this horse. I know for the future of these kids, I have to give them a chance.”

Wallin, who guided Cuatro De Julio to a 1:53.1 score last week, was grateful.

“It was an experience I’ll remember for a long, long time,” Wallin said. “First of all, he’s a very nice colt. He showed that plenty of times last year. And it’s good for your own development and experience to drive horses like that.

“I’m very thankful that they trust me and let me drive him. (Breeder/owner) Jean Pierre DuBois is a legend everywhere, so just to drive a race for him is big. And to give him a win was even sweeter. The horse had some issues last year, he was a little bit too aggressive and grabby, but they did a really good job with him in the winter. He was very nice to drive last week. I hope he is the same on Friday.”

Cuatro De Julio is among 14 Hambletonian-eligible horses in Friday’s NJSS for the male trotters. The $1 million Hambletonian Stakes is Aug. 7 at The Meadowlands.

The 7-2 second choice in the second NJSS division is Åke Svanstedt-trained Mon Amour, who also was bred by DuBois and raised by Ortolan Bar. He finished second to Cuatro De Julio last week. Locatelli, trained by Nancy Takter, is the 2-1 favourite in the first division.