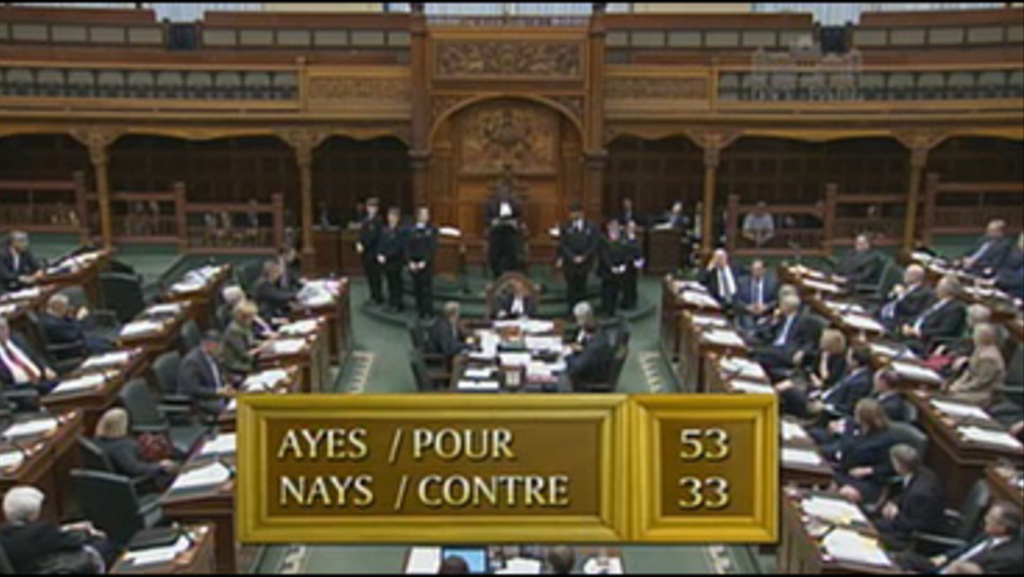 On Thursday, March 28, the Ontario Legislature carried the motion of Essex's New Democratic Party MPP Taras Natyshak. The pro-horse-racing motion calls for, among other things, the suspension of the Ontario Lottery and Gaming Corp.'s gaming modernization plan, and for changes to the current slots-at-racetracks program to be put on hold.

Natyshak's motion was carried with a vote of 53-33, with the NDP and PC Parties fully supporting the motion, while the Liberals voted against.

“This motion goes a long way towards addressing the serious missteps being made in the ‘modernization’ of the OLG and the horseracing industry,” said Natyshak after the motion was carried. “The thousands of Ontarians who depend on the horseracing industry can sleep a little easier knowing their future is more secure, and Ontarians concerned about casinos being forced into their backyards can be assured that they will have an equal voice in the decision.”

Natyshak’s motion also calls for a legislature-appointed panel to establish fair spending limits for the campaign around the casino referendum.

“The future of gaming in Ontario can’t be decided by the Donald Trumps of the world in secret, backroom deals,” said Natyshak. “My motion gives Ontarians a real say in the future of gambling in their communities.”

Natyshak discussed his motion on Trot Radio earlier this week. To listen to Natyshak on Trot Radio, click here.

The full text of Natyshak's motion is as follows:

That, in the opinion of this House, the following principles should be immediately applied to the Province's gaming policy:

1) Implementation of the Ontario Lottery and Gaming Corporation's transformation of gaming strategy be suspended until after the 2014 Ontario municipal elections in order to allow municipalities wanting to be a host site for a casino to undertake a referendum on the issue on the 2014 ballot;

2) A panel, composed of representatives nominated by the three recognized parties, be tasked with hearing from stakeholders and drafting fair spending limits for parties taking part in the referendum on casinos;

3) Changes to the Slots at the Racetracks partnership be frozen, in order to enable the horseracing industry to continue to operate while the government engages the industry in a robust consultation with the goal of ensuring its survival, stability and growth; and

4) Current funds from unclaimed purses due to racetrack closures be made available to local or community race tracks. Filed March 18, 2013.

The Ontario Horse Racing Industry Association thanked the NDP and PC parties for their support in the legislature and is calling on the government to accept the will of the majority of MPPs and immediately work with opposition parties, our industry and other stakeholders.

“Our industry is in crisis. We are days away from the end of the Slots at Racetracks Program and without a replacement long-term plan for revenue the industry will likely collapse. Our industry workers and investors are scared to death as they watch their livelihoods fall apart," said Sue Leslie, President of OHRIA. "The temporary 'reprieve' of transition funding provided by the government to racetracks does not provide the long-term stability needed for our industry to survive. Unless the government takes action to integrate our industry into the gaming modernization strategy, the industry will continue to fall apart.”

OHRIA has continued to pressure the Wynne government to follow through on their announcement that horse racing will be integrating into the OLG’s modernization strategy. “We need action now before the end of SARP in order to restore confidence and stop the downward spiral of the industry,” stressed Leslie.

OHRIA is calling on Premier Wynne to restore SARP through 2013, while horse racing is integrated into a new revenue sharing arrangement.

In addition to the PC support of the NDP motion, the Public Service Alliance of Canada (PSAC) has also announced that it will be at Queen's Park on Thursday in support of the motion.

Disappointing to find that

Disappointing to find that few papers will accept and print, letters to the editor on our industry.

Thank you to the Windsor Star.

this was nothing but

this was nothing but political grandstanding by the opposition parties. It easy to vote in favour of something when it has no chance to be implemented.

In reply to I agree with Dave Nicol and by Gleber

you have caught on to what I

you have caught on to what I told you a year ago Mr Leber when we first talked.

Look at what the runners are doing, and follow suit. They race less, they have better handles, they give the fans what they want. While it would be nice that every track stay open, it isnt going to happen. Some had to close. If we exclude Woodbine, two out of three nights, in ontario, the purses exceed the wagers taken in.

Its time to move on, and fix it, rather than waste more time worry about political parties. The game is salvageable, but you cant think it was working before and should go back to that

I agree with Dave Nicol and

I agree with Dave Nicol and Randy Young. I watch the parliamentary channel more often than anyone needs to and I am appalled. I have said on many occasions I wouldn't hire any of them to organize my closet.

The motion was virtually meaningless for what it will accomplish but it was a political tactic to show rural Ontario that the Liberals are against us regardless if their riding is affected or not. Unfortunately the Conservatives and NDP don't seem to play nice together either. The NDP in the votes just prior to this motion sided with the Liberals and sent a message to all of us that they will support any budget the Liberals bring forth in April. Deals are already made between the two parties.

So for all of us in racing, we are on our own and I will keep saying that we need to fix our own house and soon. Particularly Harness Racing needs to have their own strategy as the Thoroughbreds have all the support so far. They only have two tracks and looks like both will be operational with very little change in their operations.

Mr.Natyshak dud the best he

Mr.Natyshak dud the best he could and got the motion passed so where do we go from here.I hope not slow motion,It is sickening to watch how democracy works any one could get up there and act like a spoiled child.All i know is that the Liberals will never and i mean NEVER GET MY VOTE...............................And to those heckling PC's you expect people to vote for you,eventually you did side with the NDP but give me a break that was a pitiful display.Now work together and leave the petty crap at home.

Does anyone else feel like our industry is nothing more than a play object for these politicians to grandstand over and make points for the next election? There are exceptions such as Natyshak, McNaughton, MacLeod, etc. but for the most part, I feel that we are being used as fodder to get themselves back into a good paying job with great perks and pensions. Horwath just sounds like a broken record, reading off her script. And where the heck was Hudak? Hardly a word from the leader of a party that wants to win the next election. As for privatization of the Slots---just how the heck is that going to help the industry? All tracks will end up like Windsor, Kawartha, Rideau Carlton, etc. even sooner than they are on track to do under the new plan from the government and the OLG. As for the behaviour of our elected officials, this is just how it is. A bunch of badly behaved buffoons (women included), wasting our time and money under the guise of 'government'. They really are quite an embarrassment to themselves and to everyone outside of the legislature. I'm quite surprised that children are allowed to act as pages with the crap that goes on by our elected officials.

I will never understand why

I will never understand why OLG does not come and say flat out , expand on what is already @ the Racetracks, put in sportsbook, gaming tables etc??????

The honorable member for

The honorable member for Kawartha took pride in standing with his members to vote against the motion and turn his back on his riding. Well done Mr. Leal, as Mr. Ambrose turned in his license for para-mutual racing. I hope the slots will close also on March 31th.

Due to family obligations I

Due to family obligations I had to watch the proceedings on TV. Am I the only one that feels distress with the behavior issues with these folks we elect? To the horseracing industry and others who came with support for our cause, did you feel left out by the shots being continuously thrown from one party to another? Yes as a horseracing participant and taxpayer I was appalled! Putting this aside I appreciated the effort by Mr. Natyshak who provided a well documented motion which carried, with the support of the NDP and CONSERVATIVE caucuses! Unfortunately not one Liberal had the BA**S to stand up for the democratic process in action! Sad, but as a voter I won*t forget who my friends are, and those who are not! Something that always bothers me is when a Liberal minister always brings up the 2 billion dollars the OLG hands over for health care and education without mentioning that more than 50% of this amount comes from the SARP program! Will one of the opposition please remind them when the opportunity arises! Thanks again to those who have given us your unwavering support!

Quite a display .. makes you

Quite a display .. makes you question whether any of these politicians are capable of running the Province.

The Liberal response by the Minister of Consumer Services was particularly sickening. I wonder if anyone explained to her that over half of the $2 billion a year available to the OLG (that she was so very proud of) was contributed by the SARP.

As this is not binding on the

As this is not binding on the government Wynn will just ignore it!

Natyshak did a fantastic job

Natyshak did a fantastic job despite being harrassed by the PC's....but that's ok because they ALL voted in favour.Can someone explain what happens now.