Multiple stakes winner Obrigado made his last start in the $200,000 Caesars Trotting Classic at Hoosier Park on Sept. 21, 2018. Despite finishing fourth, beaten just 1-3/4 lengths by Triple Crown winner Marion Marauder and trotting his final quarter in :27, Obrigado did not emerge from the race well. Trainer Paul Kelley faced the reality that the career of his $1.8 million earner was over. 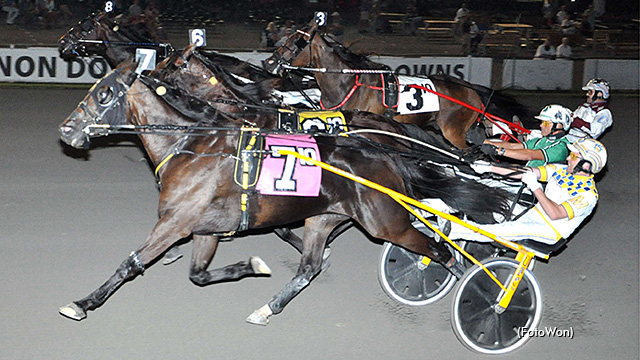 “He had a little bit of a suspensory issue going around there, which was something we had never experienced with him before. He’s had other aches and pains for sure. It wasn’t really looking too good. We scanned it a few times and pretty much the prognosis looked like retirement was probably the right thing to do,” Kelley said.

“Wintertime was coming on and you want to find any horse a good, permanent home,” Kelley continued. “I was kind of scrambling; I didn’t really have any options. I figured the best scenario would be to get him someplace where he could be turned out for the winter and let him heal up naturally on his own.”

Kelley sent Obrigado to Olive Branch Farm in North Carolina, where the now nine-year-old wintered and recuperated. Come April, Kelley still didn’t have a forever home lined up for the Boy Band son, so the trainer brought him to his racing stable at Congress Hill Farm in Monroe, N.J.

“He’s one of those horses that you don’t really want to part with,” Kelley said. “At one point, I was thinking maybe I’ll be the permanent home.”

However, Obrigado didn’t find retired life of daily paddock turnouts interesting enough, especially when forced to watch the other Standardbreds going to the track every morning. Kelley recognized the horse needed work.

“We were putting him out in the paddock every day, but you could tell he was a little bored just doing that; that wasn’t enough, especially being in the barn with all the other horses that were getting tacked up and going to the track every day. He’s an intelligent horse and he wanted to do that too,” Kelley explained.

Kelley had Obrigado’s leg scanned again, and with a green light from the vet, began light jogging on the track, swimming sessions, and under saddle riding. Obrigado took to his work and started to rebuild his foundation. With routine scans coming back clean, Kelley started to step on the gas over the summer.

“The horse loves being on the track. He loves being out there with other horses. That was really the easy part of it all,” Kelley said. “It wasn’t like we had to push him along. He’s always been a happy horse, likes work, likes the competition and all that.

“We just gradually increased the workload to the point where we got to August and we felt like he’d had enough groundwork, maybe we can start some more speed work with him. We did that and I held my breath for a long time thinking, ‘Is he going to be OK? Is he going to come out of it OK?’ So far, he’s been remarkable, he’s been just fine.”

A 45-time winner in 92 starts, Obrigado’s accomplishments include a pair of Maine Sire Stakes championships in 2012 and 2013 and the Crawford Farms Open Trot in 2015. Obrigado’s biggest season came in 2016, when he captured the Maxie Lee, Charlie Hill Memorial, Cleveland Trotting Classic, Cashman Memorial, repeated in the Crawford Farms Open Trot, won the Dayton Trotting Derby, and competed in the $1 million Yonkers International Trot before closing the year with a victory in the $400,000 TVG FFA Trot. Obrigado remained competitive on the Grand Circuit in 2017 and 2018 before going on the shelf.

“Mentally, that horse has never changed. That’s what’s remarkable about him,” Kelley said. “You see people sometimes; your attitudes go up and down throughout a racing season. You see that with horses; horses have lulls where they just don’t seem to be too keen. He’s never ever been that way. He’s always just been real bright-eyed, real keen, head out over the gate, and ears are always forward. That’s just the kind of horse he is. He’s a happy fella and he really loves being out on the track and he loves being out with other horses all the time.”

Obrigado prepared for his return with three qualifiers at Freehold. Rene Sejthen drove Obrigado to a second-place finish in 2:01.1 over a good track with a minus two variant on Nov. 1 and again took the lines in a 13 1/4-length qualifying win on a fast track in 2:00.0 with a minus one variant one week later. Kelley brought in Dube for Obrigado’s final trial on Nov. 22, in which the gelding posted a 1:59.2 win.

“My second trainer Rene took him the first two times and he was doing the right thing with the horse and being cautious and letting the horse do it on his own,” Kelley said. “I know from talking to Rene the weather conditions on those days weren’t particularly good. According to Rene, they were both really good miles for Obrigado considering the conditions and the horse did everything on his own and real easy.

“I skipped a week and then I had Dan Dube take him the last time and I just told him, ‘Make sure he does a little work the last half of the mile. He’s got to go a little bit.’ It was kind of a funny qualifier because he got caught in and a couple of pacers were battling things out up front. When Dan finally got him out and got rolling, I think he trotted his back-half in about :57.2 and he came a good last quarter, so that was good. It gives him a little bit of speed work.”

Obrigado will face a difficult field in his return, including the first four finishers from the $35,000 Preferred Handicap on Nov. 23: Stormy Kromer, Will Take Charge, Lean Hanover, and Swansea. Sumatra and Winning Shadow step up off overnight wins on Nov. 22 to complete the lineup.

“I suspect it’s going to take him a couple of races to get up to speed with the rest of the horses he’s got to race against, but everything has gone very well,” Kelley said. “He’s come back very well, so it will really be interesting to see what happens over the course of the winter.

“He’s coming off the bench and he’s been on the bench for 14 months, so I can’t expect him to be tip-top, but maybe by having the inside, he can save some ground,” Kelley continued. “I know the horse is going to be competitive from his own standpoint, but maybe he’s not physically ready quite yet. I would expect it’s going to take two races for him to get up to speed. I think that’s realistic.”

Although he will take things on a start-by-start basis, Kelley hopes to race Obrigado at Yonkers throughout the winter. Obrigado sports a 7-for-19 record at the Hilltop with seven additional placings, all at the Open level or higher. Kelley will also look for options during Yonkers’ hiatus beginning Dec. 18 and continuing into early Jan. 2020.

“We’ll get a couple of starts in at Yonkers and then they go on break,” Kelley said. “Maybe with Yonkers down, (Freehold) will be able to fill an Open. That’s a possibility if I can do that for a race or two until Yonkers comes back, but I think Yonkers is where I’d like to race him the most over the course of the winter. I think he could be a real good winter horse for Yonkers.”

Kelley also hopes to reunite Obrigado with Mark MacDonald, whose last driving start came with Kelley’s The Veteran at Saratoga in July. MacDonald suffered a fractured shoulder joint, among other injuries, in a pre-race spill later that night, but is approaching a return to the sulky.

“The partners are all excited. They’re all amazed just like I am that he’s back. Horses like that, they’re once-in-a-lifetime horses,” Kelley said. “They’re remarkable in their own way. Where there’s a will, there’s a way and they find a way to get back in the game. I’m just hoping we can go week to week, he can stay sound and we can manage him properly and it can be a fun 2020.”