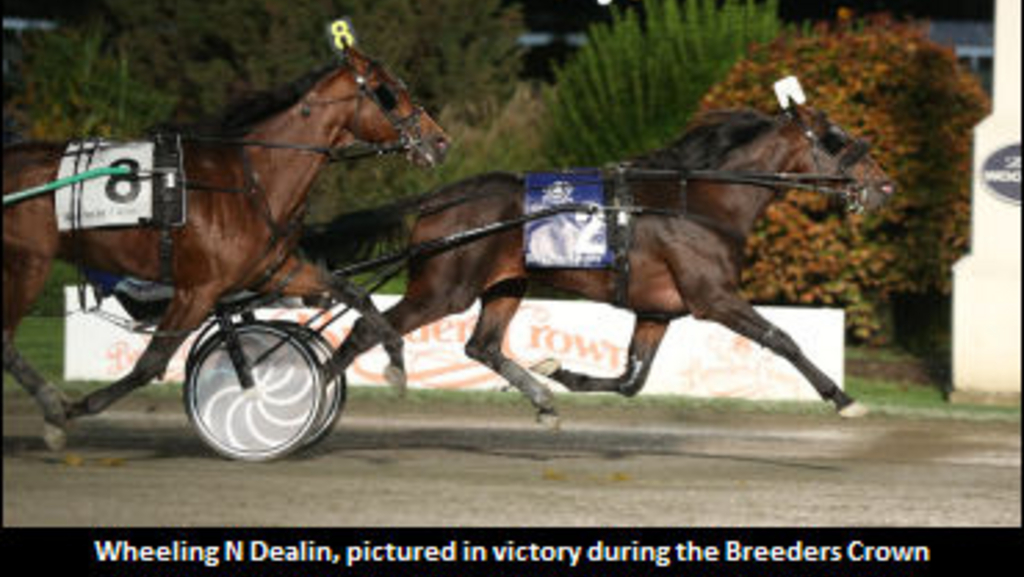 Seelster Farms has announced that the Dan Patch and O’Brien Award winning Two-Year-Old Trotting Colt of the Year, Wheeling N Dealin, is the latest addition to its stallion roster for 2016.

Wheeling N Dealin enjoyed a spectacular freshman season during which time he never tasted defeat in nine starts. He swept the Bridger Series, won his division of the Champlain in a season’s best 1:55, captured his elimination and the final of the William Wellwood Memorial and concluded the season with a sweep of the Breeders Crown.

He was the overwhelming choice as the best two-year-old trotting colt of the year in Canada and the US, winning the O’Brien and Dan Patch Awards.

As a sophomore, Wheeling N Dealin started in the three toughest races for his group, the Hambletonian, Canadian Trotting Classic and the Kentucky Futurity. In the first, he finished second in his elimination timed in 1:53.1 and, in the second, he was a close third in his elim and fourth in the final.

Wheeling N Dealin concluded his racing career late this summer at Mohawk Racetrack, winning his final two starts, including a life’s best 1:54 performance. He retires to the Seelster Farms’ breeding shed with $913,000 in earnings.

In addition to his talent on track, Wheeling N Dealin also possesses a deep pedigree. His sire is the great Cantab Hall, a winner of $1.5 million in his racing career and the sire of such standouts as Father Patrick ($2.6 million), Wild Honey ($1.6 million), Explosive Matter ($1.5 million), etc.

The introductory fee for Wheeling N Dealin is $4,000.

For further information, please check out seelsterfarms.com or call 519-227-4294.