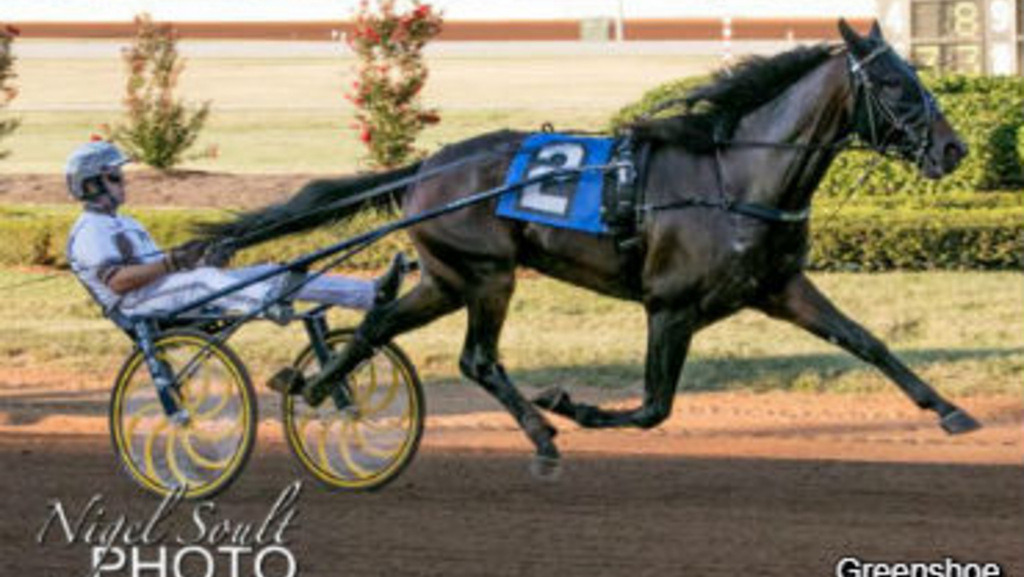 Hambletonian runner-up Greenshoe vaulted off cover at the top of the stretch and soared to a six-length victory in a 1:50.4 mile when winning the first of two $30,000 divisions of Kentucky Sires Stakes for three-year-old trotting colts on Thursday at The Red Mile.

Driver Brian Sears placed the Father Patrick colt in the pocket while Guaranteed battled Thunder through a :27.4 opening quarter. The pacesetting duo continued to match strides through a :55.1 half and past three-quarters in 1:24.3, but began to falter turning into the stretch as Sears mounted his charge three wide. Greenshoe glided to the front and widened his lead through the stretch while under pursuit from Pilot Discretion in second. Chin Chin Hall finished third.

Winning his seventh race from nine starts this season and his ninth from 13 overall, Greenshoe has accrued $843,223 in earnings for owners Courant Inc, Hans Backe, Lars Granqvist and Morten Langli. Marcus Melander conditions the Al Libfeld and Marvin Katz-bred colt who returned $2.20 to win.

Also driven by Brian Sears, Super Schissel followed cover rounding the first turn as Don’t Letem floated towards the lead after a :29.2 opening quarter. He accelerated up the backstretch as Super Schissel drew alongside before yielding command to the Per Engblom trainee past a :56.4 half. Super Schissel then cruised to three-quarters in 1:25 in progress to a 1:52.3 victory. Dont Letem finished a neck behind in second while Manatlas finished six lengths farther back in third.

An Uncle Peter colt bred by Coyote Wynd Farms, Super Schissel won his second race from 10 starts this season and his sixth from 23 overall, earning $324,067. Al Libfeld and Perry Soderberg own the $4.60 winner.

French Cafe cruised off a pocket trip to a three-and-a-quarter length victory in the first of two KYSS divisions of sophomore trotting fillies.

Caterina Hall cleared command from French Cafe heading to a :28 opening quarter while Queen Of Trixs raced from third. She continued on the front through a :55 half but faced a challenge around the final turn as driver Andy Miller moved French Cafe off the cones. Miller pushed French Cafe to the lead passing three-quarters in 1:24.3 and extended her lead through the stretch, trotting to a 1:52.3 victory while Queen Of Trixs gave chase in second. Celebrate It All closed from last for third.

A homebred for Marvin Katz and Al Libfeld, French Café won her third race from seven starts this season and her sixth from 16 overall, earning $132,900. Julie Miller trains the daughter of Father Patrick who paid $3.80 to win.

Strip It Down AS surged back to the lead when headed in the stretch to win the first KYSS filly division.

Driver Elliott Deaton dashed the odds-on favourite to the front heading to a :29.1 opening quarter. She faced no challenge through a :57.4 half but lost the lead when Dark As A Pocket lunged outside from fourth and stuck a head in front nearing three-quarters in 1:26.4. Dark As A Pocket clung to the lead through the stretch but gave way as Strip It Down AS powered through the inside to win by one-and-a-quarter lengths in 1:54.1. Refined kicked off cover for second while Dark As A Pocket settled for third.

Owned by breeders ACL Stuteri AB and Kjell Johansson, Strip It Down AS won her third race from five starts this season and her fifth from 12 overall, earning $75,929. Anette Lorentzon conditions the Archangel filly who paid $3.40 to win.