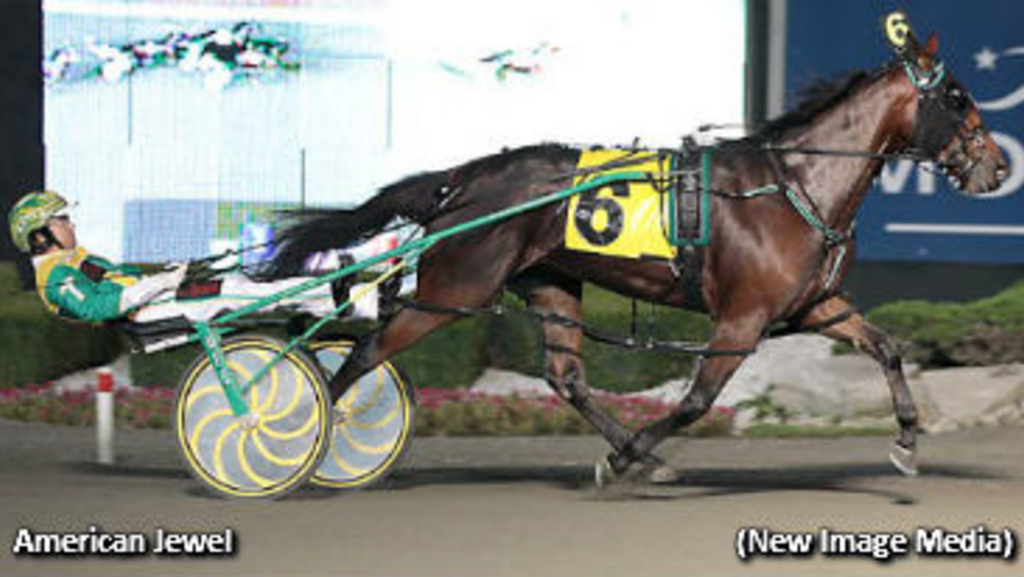 Seven sophomore fillies squared off in the lone pacing division of the Simcoe Stakes at Mohawk Racetrack on Monday evening, and American Jewel toyed with the competition for driver Tim Tetrick.

The three-year-old daughter of American Ideal-Trim Hanover, who established a world record earlier this year at Mohawk Racetrack when she won the Fan Hanover Stake in 1:48.2, knocked two-fifths of a second off Michelles Power’s Simcoe Stakes record of 1:50.1 when she captured the lone $205,871 division in 1:49.4.

Tetrick tucked American Jewel into an early four-hole while Angel Scent and Sarandon Blue Chip battled to the quarter pole in a :27-second clip. Sarandon Blue Chip eventually worked her way to the top, and she led the field to the half in :54.4 before coming under heavy pressure from a backstretch brushing American Jewel. Tetrick rocketed to the top with the Jim Takter trainee at the mid-way point of the last turn, and after hitting the three-quarter pole in 1:22.2 she used a :27.2 closing panel to win by 3-3/4 lengths over Class Of Nine. Third prize was earned by Angel Scent.

“I was trying to keep her in as long as I could and save ground because she’s got some big races coming up and she really responded well tonight,” Tetrick said following the win. “You never under estimate any of the competition. They're in a race like this for a reason. We’ve had a few bumps along the road but she seems to back on her game.”

Owned and bred by Brittany Farms of Versailles, KY, American Jewel improved this year’s record to 5-3-1 from nine tries while pushing her seasonal bankroll to $750,272. The 13-time winner has stashed away more than $1.4 million in career earnings.