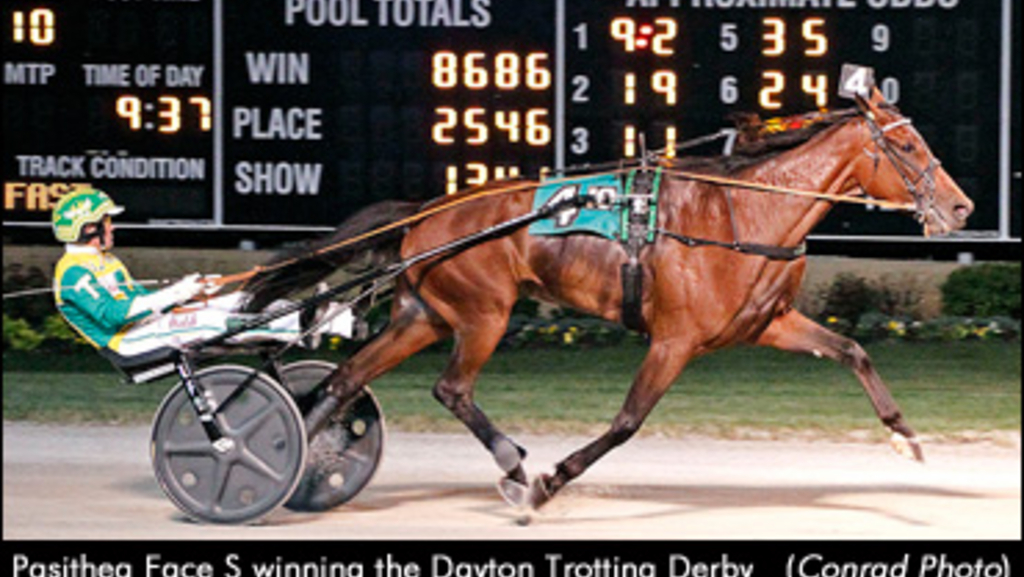 Driven by Tim Tetrick, the Swedish-bred Pasithea Face trotted out from post four and took over the lead from insider JL Cruze (David Miller) during a :27 first quarter. She continued to lead through a half in :54.4 and turned away the 2-1 favoured mare Hannelore Hanover (Matt Kakaley), who was parked out the whole way leaving from post seven. Pasithea Face was left all alone on the lead by the 1:24.2 third quarter mark and cruised home in a three-length romp. Crazy Wow (Chris Page) came on to finish second ahead of JL Cruze.

After finishing third last time out in the Maple Leaf Trot north of the border behind JL Cruze and winner Hannelore Hanover, Pasithea Face was sent postward as the 7-2 third choice in the Derby and paid $9 to win. Hannelore Hanover finished seventh.

"I thought it was her race to win if I could get the lead," said Tetrick. "I put her in a bad spot two weeks ago in the Maple Leaf Trot, but I knew she’d be good if I got her a clean trip tonight."

Rockin Ron swept past the dueling leaders in the stretch to win the Pacing Derby with Matt Kakaley aboard for trainer Ron Burke. 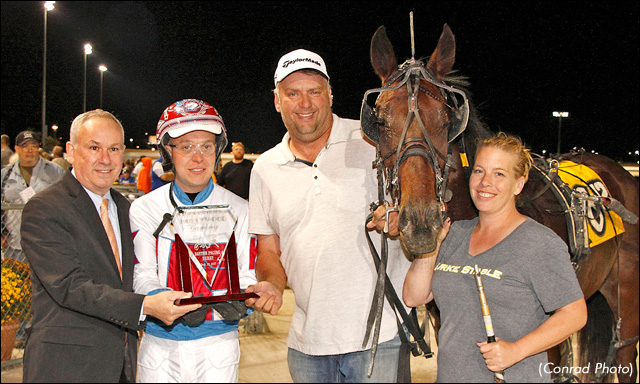 Leaving from the inside post position, Luck Be Withyou (Brett Miller) fired out to a quick two-length lead into a :26.3 opening quarter with seven starter Boston Red Rocks (Josh Sutton) moving up to challenge into the second panel. After a half in :54.4, Boston Red Rocks was on even terms with the early speedster and gained the advantage outside approaching three-quarters in 1:21.4. Luck Be Withyou fought back entering the stretch while Dealt A Winner (Aaron Merriman) rallied off cover.

However, Rockin Ron, who got away seventh and was positioned fourth-over in the outer flow tracking Missile J (Tim Tetrick), swept by on the far outside to prevail by one and three-quarter lengths in 1:50.2. Dealt A Winner finished second while Missile J secured third-place in a show photo finish with pocket pursuer Easy Lover Hanover (Doug McNair) and Mach It So (Ronnie Wrenn Jr.).

Rockin Ron paid $12.60 to win as the 5-1 fourth wagering choice. McWicked, the 2-1 favourite, was buried inside and finished ninth.

Campaigned by Burke Racing Stable LLC, Weaver Bruscemi LLC and Rtc Stables Inc., Rockin Ron has won seven of 24 starts this year and 27 races in his career. With the victory, the five-year-old son of Real Desire and Im All A Roan passed the $1 million mark for U.S. earnings.