Star-Studded Night At The Red Mile 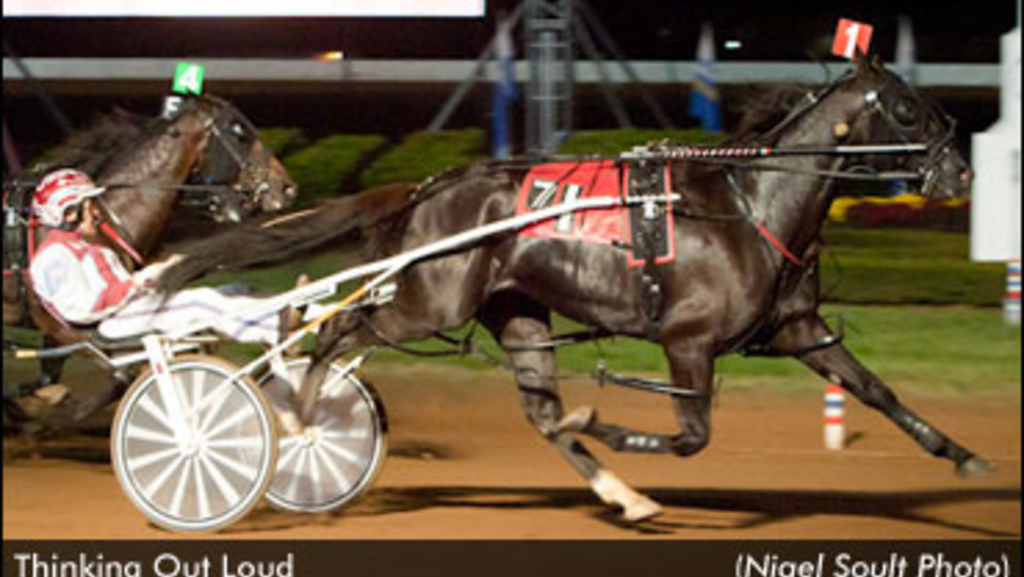 In his first start in the Ryan Maxwell barn, Dovuto Hanover proved to be a worthy gamble as he held off the challenge of Dedis Dragon to win the first two-year-old colt pace division of the Bluegrass in 1:51.1.

Dedis Dragon led the field rounding the clubhouse turn. Dovuto Hanover pulled the pocket as they passed the quarter in :27.4. Dovuto Hanover took over command as they paced by the three-eighths. Dress The Part went off stride from fourth, making a five-length gap between the field. Dovuto Hanover was unchallenged by the half in :55 (:27.1).

Pacing into the far turn, the flushed out Emeritus Maximus picked up cover from pocket-sitter Dedis Dragon approaching three-quarters. Normandy Invasion was in the cover flow from fourth. Dedis Dragon was stride for stride with Dovuto Hanover by three-quarters in 1:24.2 (:29.2).

Dovuto Hanover ($3.60) is a son of Dragon Again, out of the mare Daughterofortune by Jennas Beach Boy. He is owned by Martin Scharf, trained by Ryan Maxwell and Ron Pierce was in the bike.

Fool Me Once Prevails in Second Bluegrass

Ron Pierce scored a driving double aboard the Mark Austin-trained Fool Me Once, winning the second Bluegrass division in 1:51.3.

Our Dragon King was three-wide as he left with Fool Me Once, banking into the first turn. Our Dragon King cleared the front and led the field by the opening quarter in :26.4. Down the backstretch, Fool Me Once pulled the pocket and cleared the front approaching the half. Modern Warfare was flushed out just by the half-mile, timed in :54.3 (:27.4). He supplied cover to Clint Westwood and Sir Richard Z Tam.

Into the far turn, Modern Warfare dueled with leader Fool Me Once. Our Dragon King was locked at the pylons in third and Clint Westwood was second over in fourth. As the field passed three-quarters in 1:24.3 (:30), Clint Westwood and Sir Richard Z Tam began to rally off cover and first over Modern Warfare was swallowed by the field.

Fool Me Once ($4.60) is by Art Major out of the mare Fool That I Am by Jennas Beach Boy. He is owned by Mark Austin Stables and Daniel Smith.

“This colt's been drawing bad and racing from the back, I thought to qualify him to tighten him up,” said Austin.

When asked when he knew the colt could race with the top calibre, Austin said, “He was a hot colt all spring and we got him to settle down. I took him to Grand River to try the sulky first time and he adjusted to it well."

Rockin Amadeus received redemption as Odds On Equuleus, who caused confusion to the trailing horses into the far turn, was disqualified from first and Rockin Amadeus was placed as the winner.

Into the far turn, Odds On Equuleus caused confusion to the trailing horses, while Johny Rock came first over to challenge the leader. Johny Rock was up to Campbell’s wheel at three-quarters in 1:24.4 (:28.4).

Into the lane, Odds On Equuleus was holding off the challenge of Johny Rock. Once Johny Rock dropped back, Rockin Amadeus pulled the pocket and had one final surge to try to catch Odds On Equuleus, but his surge was a failure. Odds On Equuleus won in 1:51.2, but was disqualified for interfering with the trailing horses around the far turn.

Placed in first, Rockin Amadeus ($10) is by Rocknroll Hanover out of the mare Kikikatie by Real Artist. He is owned by Ontario's Lothlorien, trained by Jimmy Takter and Yannick Gingras was in the bike.

Hail The Taxi made a first over move to the lead at the quarter in :27.4. My One Tru Desire was back in second and Good Day Mate was in third.

Captaintreacherous came first over to challenge at the half-mile in :56.4. My One Tru Desire pulled the pocket to retake the lead into the far turn.

Captaintreacherous ($2.40) is by Somebeachsomewhere out of the mare Worldly Treasure by Artsplace. He is owned by Brittany Farms, Ontario's Marvin Katz and Joe Sbrocco, trained by Tony Alagna and Tim Tetrick was in the bike.

Twilight Bonfire Comes from the Clouds to Win Final Bluegrass

Twilight Bonfire chased down Modern Cruiser to pull off the upset in the final division of the freshman Bluegrass.

Urbanite Hanover had broken equipment and made a break, along with Muscle Beachboy. Modern Cruiser inherited the lead into the far turn and drew away by five lengths. Thirty Two Red gave chase in second and Wake Up Peter was being urged on in third. Modern Cruiser took the field by three-quarters in 1:23.4 (:27.4).

Into the stretch, Twilight Bonfire began his rally after the 50-1 shot. He gained ground with every stride and took the lead from Modern Cruiser. Twilight Bonfire then drew off by two lengths to win the final Bluegrass in 1:52.1 (:28.2).

Twilight Bonfire ($25.80) is by The Panderosa out of the mare Firelight Dancer by Cam Fella. He is owned by Robert Key, trained by Danny Collins and John Campbell was in the bike.

Shelliscape Rebounds Off of Jugette Loss to Win Bluegrass Division

After losing as the favourite in the Jugette final, Shelliscape paced a perfect mile to break Romantic Moment’s win streak in the first division of Bluegrass for the three-year-old filly pacers.

Romantic Moment and Big Mcdeal were the fastest leavers heading into the first turn. Big Mcdeal cleared the front by the eighth pole, while Romantic Moment tucked in second and Lightning Paige paced along in third. Big Mcdeal led the field by the quarter in :27.

Darena Hanover came first over as they paced by the three-eighths. She cleared the front at the half-mile in :54.3 (:27.3). Into the far turn, Ramalama came first over and flushed out Romantic Moment as they approached three-quarters. Shelliscape was tracking their cover towards the back of the field. Romantic Moment stuck her head in front of Darena Hanover at three-quarters in 1:22 (:27.2).

Shelliscape ($11.40) is by Artiscape out of the mare Shell I Scoot by Direct Scooter. She is owned by Ontario's Bob McIntosh Stables and Al McIntosh Holdings along with the C S X Stables, trained by Bob McIntosh and John Campbell was in the bike.

“The fast fractions set up [for us] well. I was third over and the cover went up. I was in good striking range into the stretch and when I tipped her out, she came up very strong,” said Campbell.

American Jewel returned from her loss in the Jugette to emerge victorious in the second Bluegrass division for three-year-old filly pacers.

Destinys Chance took the lead from the far outside, while Rockaround Sue tucked into second and American Jewel was in third. American Jewel pulled the pocket and paced up to the leader's wheel at the quarter in :28.3.

Sarandon Blue Chip was flushed first over at the half-mile in :56.1 (:27.3). Economy Terror picked up the cover and Blackjack Princess was third over. Around the far turn, Sarandon Blue Chip made a break and interfered with Economy Terror, Blackjack Princess and Podges Lady, taking them out of contention. It was a three-horse break away at three-quarters in 1:23.3 (:27.2).

American Jewel ($3.20) is by American Ideal out of the mare Trim Hanover by Camluck. She is owned by Brittany Farms, trained by Jimmy Takter and Tim Tetrick was in the sulky.

Thinking Out Loud returned to the winner's circle as he paced on by rivals to win the first sophomore colt pace Bluegrass in 1:51.2.

Pet Rock cleared the lead from Bettors Edge as the field banked into the first turn. Thinking Out Loud got away in third and Damon Blue Chip was in fourth. Pet Rock paced by the quarter in :28.2. No one made a move passing the half-mile in :57.1 (:28.4).

Thinking Out Loud is by Ponder out of the mare Los Angeles by Camluck. He is owned by Ontario's Bob McIntosh Stables and Al McIntosh Holdings along with the C S X Stables, trained by Bob McIntosh and John Campbell was in the bike to score a driving double.

Mel Mara overtook command from Bolt The Duer and stormed home to pull off the 6-1 mild upset in 1:49.4.

Escape The News took the lead, while Bolt The Duer was first over on the outside. Bolt The Duer cleared the lead at the quarter in :27.2. Down the backstretch, Sweet Lou came first over, supplying cover to Dapper Dude. Mel Mara was flushed first over by the half-mile in :56.2 (:29).

Mel Mara took a short lead to the outside of Bolt The Duer by three-quarters in 1:23.3 (:27.1). Into the lane, Mel Mara kicked away to a two length lead, while Sweet Lou was attempting to rally on the outside and Escape The News was coming up the cones in third. Mel Mara was home free in the sixteenth pole and he won in 1:49.4 (:26.1). Sweet Lou finished second, Escape The News was third and Hillbilly Hanover split horses to finish fourth.

Mel Mara ($14.80) is by Lis Mara out of the mare M L Revrac by Matts Scooter. He is owned by Brittany Farms, John Carver and Riverview Farms, trained by Tony Alagna and Tim Tetrick was in the bike.