Let It Ride Stables' Shabby Chic ($2.10, Tim Tetrick) completed a sweep of her $20,000 Delaware Standardbred Breeders Fund (DSBF) preliminaries with a front-stepping romp in 1:57.1 over Hearty Dragon and Mistatude on Tuesday (Sept. 28) at Harrington Raceway. 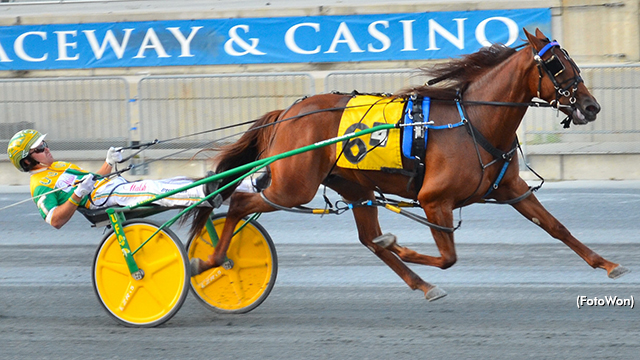 The top-eight point earners from the DSBF events will return to compete in the $100,000 final on October 5.

In the remaining DSBF divisions, Gty Stable's Gaitway Gal ($2.40, Pat Berry) improved to four-for-five lifetime with a 1:58.1 victory for trainer Jeff Smith. The Delmarvalous filly drew away from her rivals effortlessly for a four-length score.

Bryan Truitt, Bryan Truitt Jr. and Victor Kirby's Bank The Win ($3.60, Kirby) was a 1:57.3 winner in the first DSBF split. Trained by Truitt, the Roddy's Bags Again filly surged to the lead near the top of the stretch and pulled away from Bluffs Crush and Tahoe, who rounded out the trifecta. The Roddy's Bags Again filly registered her 1st career win.

Art Stafford Jr. won three races on the card while Pat Berry and Jon Roberts each had driving doubles.