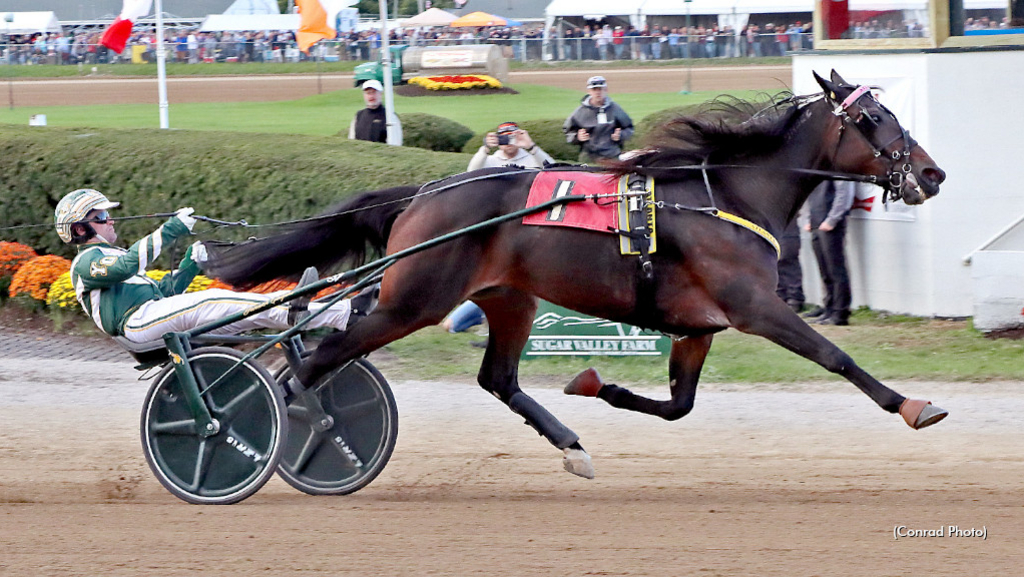 Atlanta made her Delaware County Fairgrounds debut and swan song in style, easily dispatching of her seven rivals in the $115,500 Miss Versatility Series Final for older trotting mares on Thursday (Sept. 22) as part of the Little Brown Jug undercard.

There wasn't much strategy for driver Yannick Gingras from the rail, and there wasn't much surprise as to what the strategy would be. The Hall of Fame driver asked the future Hall of Fame trotter to front the field and make the mares beat her, and the Ms. Versatility finalists didn't muster much of a fight. With Atlanta on top through fractions of :28.4, :58.1 and 1:26.3, Atlanta powered home in a brisk :26.4 to top pocket-riding When Dovescry by 1-1/4 lengths in a time of 1:53.2. Refined (Mitchell Cushing) was best of the rest for the show dough.

Owned by Crawford Farms Racing of Syracuse, N.Y., Brad Grant of Milton, Ont. and Howard Taylor of Philadelphia, Penn., Atlanta (Chapter Seven - Hemi Blue Chip) picked up her 36th lifetime win in 74 career starts. The connections announced earlier this week that the seven-year-old winner of nearly $3.6 million would head to the breeding shed at the end of 2022.

Atlanta paid $4.20 to win in her first and final Delaware appearance, a bittersweet occasion for her connections.

"She's just a special thing," said co-owner Taylor. "I mean, just every race she puts out and she gives her best. It's been a miracle."

Crawford clearly admires the mare just as much.

"She's going to be a mom soon, and I think that's going to be her next accomplishment. I'm sure she's looking forward to that...she's just the most amazing horse I've ever owned."

The start over a half-mile oval on Thursday was Atlanta's first since 2019, but driver Gingras had no concerns about how she'd handle the smaller surface.

"It's tough when you get to the end of a horse's career like this because, you know, like today it's not about the money...you want to put that on her resume. Every race now is [because] you want to try to put one more big one on her resume because she deserves it. She's been great for five, six years, and we're sure going to miss her."