Sure, the Caretakers Classic was only an exhibition race, but try to tell that to the five grooms that participated. To say they were out for blood would be an overstatement, nevertheless, each groom certainly wanted to win Wednesday, September 21 at Monticello Raceway. 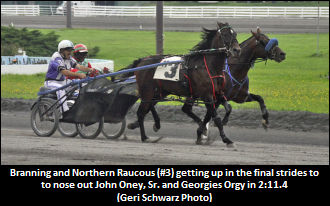 Branning has been a caretaker for the John Stubits Stable since the early 1980s, while Oney has been a longtime groom in the Frank Yanoti Barn. Lawrence works in the Peter Stratton Stable.

“I was an also-eligible last year and didn’t get a chance to race, so I really wanted to win this time,” Branning told Shawn Wiles, the track's assistant general manager who presented the trophy. “Me and John (Oney, Sr.) were rockin’ our jog carts in the stretch and my horse finally got the best of his just before the finish.”

The Caretakers Classic is a series of two races for grooms. The second dash will head postward Thursday, September 22 and will take place between Race 5 and Race 6 on the pari-mutuel card.