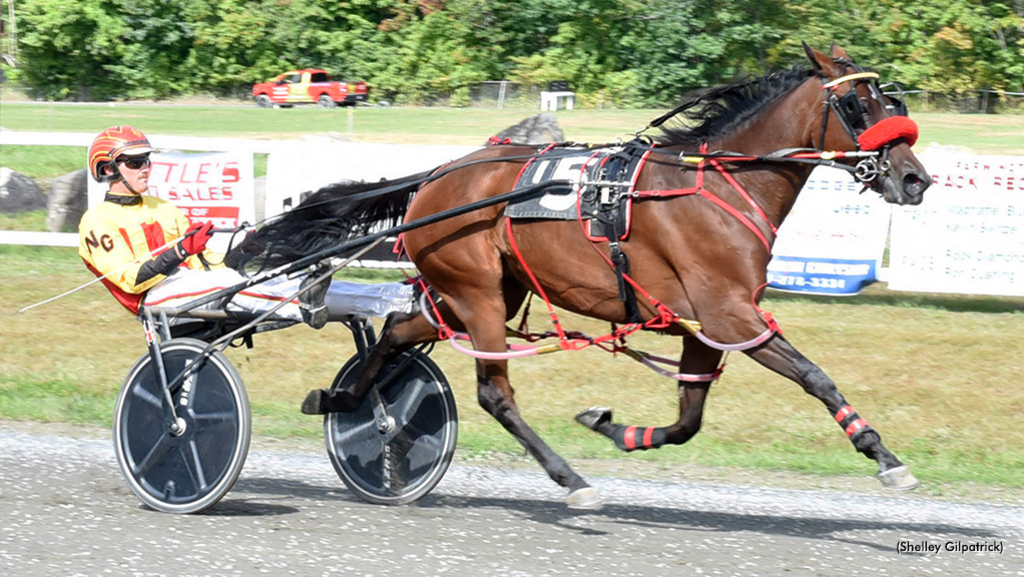 The Maine-bred sophomore pacing filly, Wolverina, has yet to be tested since June. Having won every race that she has been entered since Independence Day, the three-year-old daughter of Cheyenne Hollywood has racked up eight consecutive victories at every oval from Cumberland to Skowhegan, and all points in between.

But, up until this week, Wolverina had not entered the burrow of Pembroke Legacy, the other here-to-fore unbeaten filly in the division. That homebred daughter of Baron Biltmore had never tasted defeat in a Maine Breeders Stake (MSBS), reeling off nine wins like a knife through butter for trainer Valerie Grondin and owner/breeder Bill Varney. That is until Wednesday (Sept. 21) at Farmington, in a rare combining of the leaders of the division, which pit the two superstars against one another.

Going for $18,211, and scoring from post five, Wolverina and driver Nick Graffam left hard and gained 2-1/4 lengths on Pembroke Legacy, who had pylon position at the start and settled into the garden spot for driver Heath Campbell.

Wolverina maintained well-rated opening fractions of :30 and 1:00.2. No movement allowed Nick Graffam to maintain his position and conserve energy into a modest 1:30.2 third panel. Without any earlier pressure, Graffam let out a notch and posted a :28.3 final quarter to score in 1:59, over Pembroke Legacy, by 1-1/4 lengths.

In Wednesday’s second $18,211 MSBS division for three-year-old pacing fillies, Sweet Baby G came from off the pace to score in 2:01.2. Driven by Walter Case Jr. for trainer, co-breeder and co-owner Fred Ward Jr. with Sharon Ward, the daughter of Baron Biltmore paid $3.60 to win. There was a dead heat for second between Sheza Rebel (Andy Harrington) and CBF Fin (Dave Ingraham).

Farmington welcomed the freshman pacing colt and geldings on Tuesday (Sept. 20), with trainers Valerie Grondin and Marc Tardif grabbing the lion’s share of the prize money.

In the first $18,008 MSBS event the victor was Two Towns Over who won by 7-1/2 lengths in 2:01.3. Driven by Aaron Hall for trainer/owner Valerie Grondin, the son of Deuce Seelster was bred by Andrew Bustard. Tardif Taskforce stablemates Rockaround Sam (Andy Harrington) and Twice The Ice (Walter Case Jr.) finished second and third, respectively.

The second event, racing for $18,008, witnessed a Tardif exacta as Luke McGook (Kevin Switzer Jr.) won by a neck over stablemate So Rock N Roll (Andy Harrington) in 2:04.3. Luke McGook, a son of Rock N Roll World, is owned by Leighton Property and was bred Erika Saucier. Mattucci (Heath Campbell) was third.

The final stop on the Pine Tree State fair circuit is historic Fryeburg, Oct. 6-8. The Maine-sired sophomore finale returns to Bangor for all of the three-year-old MSBS divisional finals on Oct. 15.